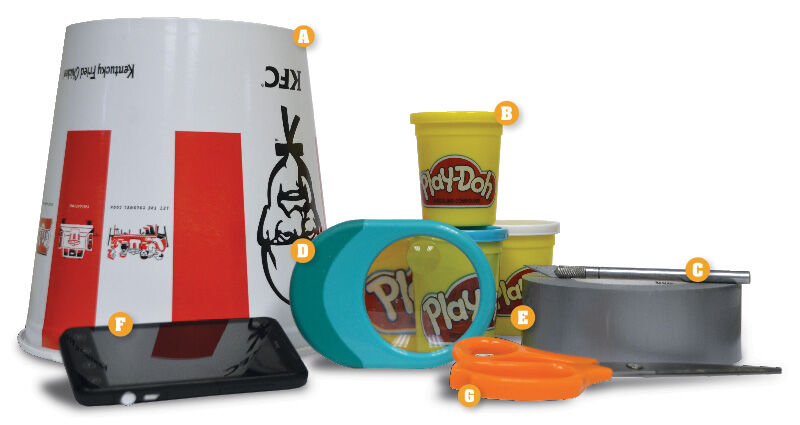 Sometimes a good idea should stay just that—an idea. During a lull in our production schedule this summer, FT decided to sincerely flatter Business Insider and see if we, too, could recreate Pizza Hut’s Blockbuster Box, which repurposes a pizza box as a movie projector. The clever promotion was dreamed up by Ogilvy Hong Kong for Pizza Hut Asia.

Inside the box was a pizza and a plastic "table" that served to keep the pizza from touching the top of the box and as a stand for the iPhone used as the projector. Also included was a plastic lens and a coupon for a free movie download.

There was no way we could top Ogilvy’s box art, a drawing of a tropical babe holding a pineapple with the words "Hot & Ready" printed above her, so we opted for a different approach. Since it wasn’t kosher to use another pizza brand’s box, and we wanted something more franchisey than the shoebox Business Insider used in its video, we decided to use a KFC chicken bucket and/or a McDonald’s Happy Meal box.

I roped our web marketer, Adam Griepentrog, into the project because he’s our social media wiz. My task was to buy the supplies; Adam was charged with turning them into a working projector. Mine turned out to be the more challenging of the two assignments. My first stop was Target where I bought a magnifying glass and Play-Doh, which serves as the anchor for the iPhone. Since it was only fair to buy the KFC bucket filled with chicken, I paid $32—$32 for a cardboard bucket! It felt like the Beanie Baby days when crazed mothers drove through McDonald’s for the stuffed bears and disposed of the Happy Meal contents.

I thought it was a stroke of luck that a McDonald’s was located next to KFC. I ordered a Happy Meal (why when you say you want a hamburger with just pickles and onions, do they assume you want more onions than burger?) only to discover after paying my $3 and change that it came in a paper bag. I was told they’d run out of the cute boxes. The next day I tried again at another  McDonald’s, only to be told it had run out as well. I’m sure Adam was secretly grateful to only have to make one projector.

The first magnifying glass ($3.29) didn’t work because of its fish-eye feature. The second one cost $7.95 and Adam had to snap the handle off it. Add the stabilizing Play-Doh for $2.99 and I was into this projector for roughly $43. The iPhone component, Adam and I decided, wouldn’t be a permanent fixture and therefore didn’t need to be expensed.

With the Business Insider video playing on Adam’s iPad, my iPhone as the video recorder and Adam’s iPhone as the projector, we set to work. Since it was Adam’s phone going inside the used chicken bucket, he wiped it out a second time to ensure all the crumbs and grease were accounted for. But be forewarned: We weren’t totally successful. The image was fuzzy. In order to counteract the inside of the bucket’s white glow, we lined it with silver masking tape. The image was still fuzzy. Next we tried using a black Franchise Times jacket left over from the fall conference to make a shroud. That was a dead end as well.

The moral of this story is that sometimes  it’s cheaper to watch than participate. Not all of us were cut out to be in the movie business.