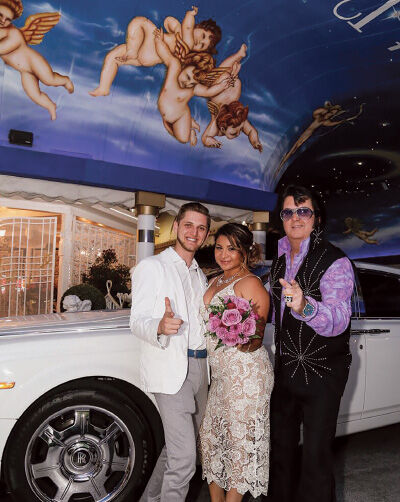 Philipp and Jeanette Sitter of King's Bierhaus chose Vegas for their wedding, along with Elvis doing the honors. 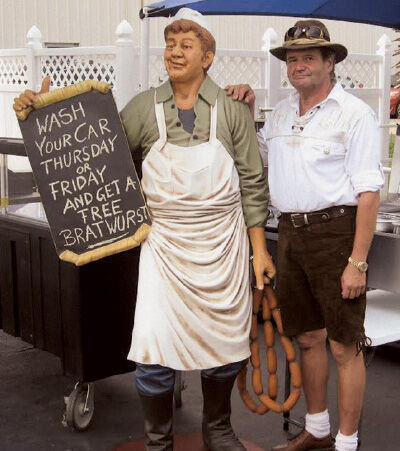 Hans Sitter, Philipp’s father, handing out free sausages at their original car wash back in the day.

Before there was King’s Bierhaus there was a car wash, which Philipp Sitter and his father, Hans, immigrants from Austria when Philipp was 6, opened outside of Houston. Soon they found it took too long to hand-detail the F250 pickup trucks that so many customers drove, so people would wait a bit but then drive away angry about the lines.

Sitter’s father concocted a plan. "My dad put on his lederhosen, and he did what every immigrant entrepreneur would do and started giving out free food and free beer," and the car wash line soon turned into a party, with guests hoisting beers and scarfing down sausages. But every party has a pooper. "And the city shut us down entirely, and said no, you can’t give out free beer and free food anymore."

It turns out Sitter the son has as much flair for the dramatic as his father, as he displayed in opening remarks at a Franchise Times-sponsored conference in May in Las Vegas. "I got married on Monday in a pink Cadillac," he said to the crowd, with him and his bride enjoying "the whole Las Vegas experience."

Then came the punch line: "I just met her last week," he said about his new wife—but that last part turned out to be a joke, even though the rest was true. He’s known his wife, Jeanette, for six years; she works in the family restaurant business and the two got engaged at the Wynn Hotel in Vegas last December. They both thought a Vegas wedding would be a hoot.

"We looked online and obviously the Little White Wedding Chapel popped up, and we went there and they said, we can marry you right now," he said.

"And we said, right now, right now? We said we aren’t ready right now, and we went right down the street and picked out an outfit." By the time they got back, the Elvis impersonator was there, and they said the two could have a traditional wedding or "we can have Elvis marry you. That was not a tough choice at all," Sitter said, "and then they took us outside and put us in the back of what Elvis calls his Mama’s pink Cadillac." Elvis sang two songs, they exchanged vows and the whole thing cost about $400. Sitter pronounced it "so cool."

One reason Sitter & Co. is so busy this summer is their first franchise of King’s Bierhaus is set to open outside of Houston. The model is 4,000 to 6,000 square feet, costing about $1.2 million to $1.7 million to build out. "The model is much less complicated than the full-service restaurant," he said, but will still include some of the best elements from their original restaurant, King’s Biergarten.

King’s Biergarten, the restaurant that eight years ago replaced the car wash mentioned above and has been expanded 13 times, is a doozy. It has a patented beer barrel-ordering system that’s 20 feet tall. It has an 85-foot bar with more than 50 whiskeys and 35 beers on tap, including four beers brewed by monks, in monasteries. That’s a thing back in Europe.

It has a beer garden outside with all communal seating, a waterfall and a river running through it. It has "a ton of flowers and trees, and then we have a 155-foot mural of different German and Munich castles." Oh, and there’s a wall of moss inside. When asked if he copies his father in favoring the showy, Sitter says, "Oh, for sure. A sense of the dramatic is probably the best way anyone’s ever put it.

"Our whole mantra is, we create a unique experience for a guest to forget their outside world for a while. We realized that a restaurant can be so much more than a restaurant."