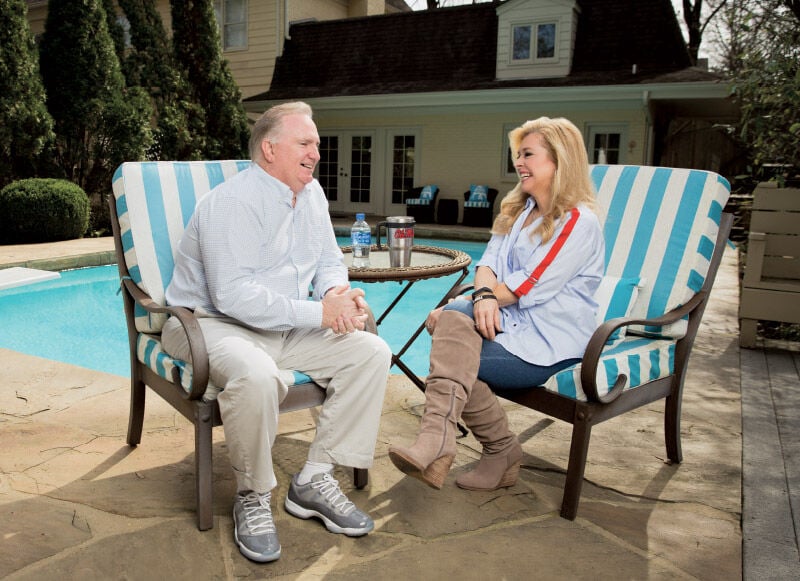 Sean and Leigh Anne Tuohy at home in Memphis, after most of RGT Management assets have been sold. 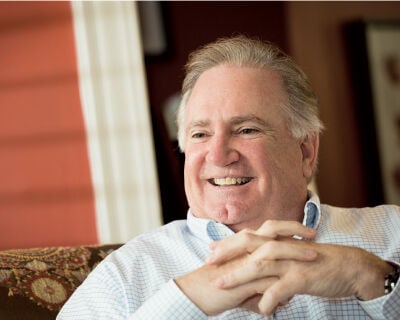 "It’s a lot harder to unwind a company than to build a company," says Sean Tuohy. 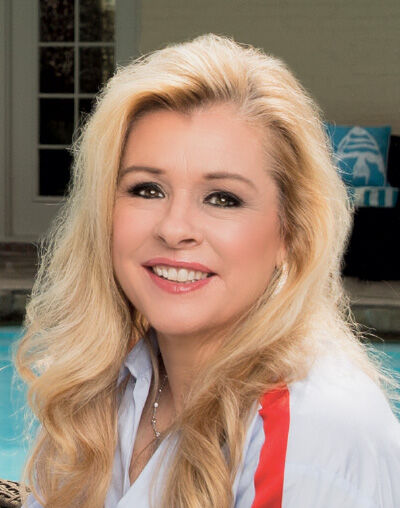 It may seem like easy street for longtime restaurant operator Sean Tuohy of Memphis, now that he’s sold 105 restaurants and 55 properties for $213 million in six separate transactions. His company, RGT Management, completed those deals with the help of longtime investment banker Auspex Capital last year. Turns out it was a tough road.

"It’s a lot harder to unwind a company than to build a company," declares Tuohy, the protagonist with his wife, Leigh Anne, in the 2009 hit movie "The Blind Side," about their adoption of Michael Oher, a homeless African-American kid they saw on the side of the road, wearing cut-off jeans and a T-shirt in the bitter cold.

Oher went on to play NFL football for the Baltimore Ravens and the Carolina Panthers, and Sandra Bullock played Leigh Anne Tuohy in the movie. Tuohy downplays the initial encounter with the 16-year-old Oher, which perhaps explains why he’s a no-nonsense restaurant operator who leaves the dramatic stories and impassioned statements to his wife.

"It wasn’t that big of a deal. We just happened to pass him," and then his wife ordered him to stop. "Leigh Anne told me to pull over. I’m very coachable. It’s a theme of my life."

As for divesting his restaurants, including 28 KFCs to his longtime operating partner Michael Roe, whom he calls a superstar, it’s a process. "You can’t just walk away. You have to stairstep it down. There’s people involved. I thought, turn the lights off and you leave," but no such luck.

His wife’s younger brother got him into the game three decades ago. "He had a good night, and he couldn’t find a Taco Bell," says Tuohy with a laugh. He bought one Taco Bell restaurant in Meridian, Mississippi, a four-hour drive each way every day, which corporate said was challenged. "It was a euphemism" for underloved.

"I loved it to death," he says. "It was mine. I enjoyed cleaning out the grease pans" and sweeping out the dirt. "It was my dirt. I was responsible for the dirt."

He and Roe grew the business to 115 Taco Bell, KFC and Taco Bell/KFC co-branded units in six states, seven Freddy’s locations and the real estate underlying 64 of the restaurants. On the advice of Auspex, he retained 11 Taco Bells, all in the beautiful and warm Florida Panhandle, something he advises others to do.

"I would recommend not getting out" all the way. "I would recommend getting to a comfort level." Chris Kelleher and Naveen Goyal, his advisers at Auspex on both the ride up and the divestment down, told him over eight years to consider the emotional as well as the financial aspects. "Your competitive nature, there will be a vacuum," he recalls Kelleher saying.

So which do the folks at Auspex like better, the ride up or the ride down, I asked, and they couldn’t come up with a pat answer. "It’s kind of bittersweet," says Kelleher, when the client’s portfolio is sold. "We’ve had a long relationship with Sean. I went to his daughter’s wedding. When I go to visit him I stay at his house, and that relationship is going to be not as close," he says, although he knows it won’t completely end. "I still talk to him all the time. We enjoy the relationships and that’s what we build our business on."

Adds a philosophical Goyal: "It’s part of the journey. They’re going to have to build until it’s time to harvest."

And then there’s this: "When you sell you make a lot more money a lot quicker."

One thing Tuohy does enjoy post-sale is a big pile of cash. "There’s nothing wrong with that," he says, especially because "I’ve never had that before." His father was a schoolteacher and coach and his wife’s father was a police officer. "People who say money isn’t important are the people who have it."

Besides, it’s been a long time coming. "I think we started out negative," he said, referring to cash on hand, and money stayed tight most of his career as he poured back equity into buying more restaurants, and adding debt with each transaction.

"People like myself who grow wealth through leverage," because they don’t have any capital to start with, "you’re fighting the leverage the whole time." Even though your top line keeps growing, "your bank account doesn’t show it. I kept telling my wife, ‘We’re doing great. We’re doing great,’" he says, but she wasn’t feeling or seeing it.

"I was five days from bankruptcy twice," he said, in the year 2001, and he remembers the time frame clearly because the company’s massive restructuring document he and his vendors and bankers had worked on for months literally got destroyed on 9/11. "The last signature was someone in the World Trade Center," he says, so the entire restructuring had to be postponed for a later date.

How did his operation get in so much trouble back then? "It was going down the cafeteria line, and my eyes got bigger than my stomach."

The basketball metaphor isn’t an accident. Tuohy got a basketball scholarship to Ole Miss, also known as the University of Mississippi, after he went to an outstanding high school, Isidore Newman, because his father taught there and his tuition was free. He was not a standout student. "I tease everybody, I made the top half of the class possible. I was just a meathead trying to get to college on a basketball scholarship," he says.

"I was undersized and under-talented and we weren’t very good when I got there," he says, but Tuohy led the Ole Miss Rebels to their first SEC men’s basketball tournament championship in 1981. A point guard, "I played by fear that I was going to get run over," but many of his records still stand.

Leigh Anne was a cheerleader for the basketball team, and they got together. "She said it was because we had short shorts back then," he jokes. If they had worn the long, baggy shorts with the leggings like today, forget it. "I am the example—if people give you a chance," something good can happen.

The sentiment was bred into him by his father, Tuohy says, a beloved coach whose players still say decades later that the elder Tuohy lifted them up.

When the couple met Oher, the idea became action. "It really was the underlying basis for our developing a relationship with Michael. We couldn’t understand why people valued him the way they did," he says. "People are so undervalued. When given the opportunity, people can do wonderful things. It’s the foundation by which this whole world is flawed or existed or has prospects."

Oher just retired from the NFL at age 32 but Tuohy isn’t worried that he will go broke like other young athletes. "He’s not one of those. He’s very smart. He’s very frugal," and he’s been that way all along. "When he came here, that’s who he was. We just didn’t screw him up. We just gave him an opportunity."

Both with his children and with his employees, he’s tried to follow the same path, "that came to me by DNA." His style is "maybe a little hands off for people. You have to allow them to get there," he says. "I’ve tried to let people become who they’re supposed to be. It’s a harder avenue than the other one. The people who are like me," meaning restaurant operators, "we are control freaks."

He closes with advice for other owners in the same spot as he—find advisers and listen to them over your career, as he did with Auspex Capital. "I know then and I really know now that I couldn’t do it without them," he says. "The problem that people have who are at this level I was at, there’s nobody to ask that question of.

That’s why Auspex was important to me.

"We don’t have boards. We don’t like to listen to anybody," he says. "That’s when it changes, when you start listening to someone."

‘A need is a need,’ says Leigh Anne Tuohy of ‘Blind Side’

It doesn’t take much to get Leigh Anne Tuohy wound up. As her husband says, "She’s very competitive to every inch. She’s driven like a Ferrari." And if you threaten her loved ones? "Don’t go there. She’ll cut your legs off if you go after the family."

On a visit to her Memphis home two days after the Oscars, she had already fired off her daily tweet about the swirling criticism over best picture winner "Green Book."

"I’m sorry if you don’t like it," she says, acknowledging it’s the same criticism her family faced since "The Blind Side" publicized their story of adopting Michael Oher, a black teenager, into their white family. "Go do your own thing. You do what you want to do to make a difference."

In "Turn Around," one of her two best-selling books, she urges people to do just that—turn around and notice someone in need, and then take action to help. "There are so many people we as humans pass by," she says. "I pull up to a bus stop and say, let me take you" where you need to go. She says she does so all the time and meets all kinds of interesting people that way.

"No one has time to do that," she says is everyone’s excuse, yet people have plenty of time to sound off on social media. "I think we’re all so concerned with hashtags and followers and re-tweets that it’s becoming obsolete" to shake a hand or give a hug. "It’s becoming a lost art."

She thinks people have more in common than they think, but "it seems to be the differences that keep raising their head," and she’s tired of the fighting. "I just don’t care who’s president of the United States. I’m not wearing a pussy hat," she says, those hats that women wore to protest Donald Trump’s presidency.

"They look ridiculous," for one thing. "Let them do them and I’m going to do me. I don’t care if you like me. I piss people off every day. I could care less."

These days her focus is on foster care, specifically eliminating the need for it in the United States by finding families for children in the system, and she gives motivational speeches to encourage random acts of kindness.

As for criticism, bring it on. "I don’t care if you’re black or yellow, fat or skinny, wear a Mohawk or wear a ponytail, a need is a need," she says.