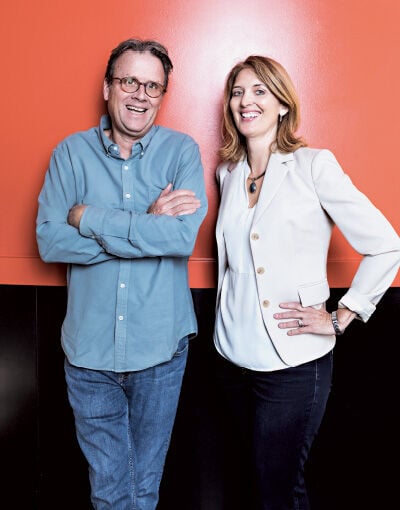 Recognizing a "gaping hole" in the market when they saw one, Rick and Elise Wetzel co-founded Blaze Pizza and with CEO Jim Mizes have grown it to north of 300 units and No. 1 on the Franchise Times Fast & Serious ranking.

The 300-location mark is a pretty big deal in franchising; it’s a milestone that few concepts ever reach. Just 108 franchised brands have grown beyond the 300 mark. It was a nice milestone at Blaze, but when the company ticked over 300 in November 2018, CEO Jim Mizes didn’t spend too much time patting his back.

"I can be guilty of not celebrating where we are, but really it’s what comes next in the evolution of the brand to get us from 300 to 700 or whatever is next," said Mizes.

Founders Rick and Elise Wetzel built that growth mindset right into the brand DNA. So even at 176 percent sales growth and 121 percent location growth from 2015 through 2017, it’s all part of the plan.

"We always said from the beginning, let’s think and act like we’re a 1,000-restaurant organization," said co-founder Rick Wetzel. "That meant everything we did from day one, from the numbering systems to the store design, everything was built so we could get to 1,000."

And if anyone could do it, it’s Rick and Elise, the dynamic Southern California duo behind Wetzel’s Pretzels who were both former brand managers at Nestle.

As the story goes, they wanted pizza for a quick lunch, which just wasn’t available. So they went to Chipotle instead for a burrito and got a hearty portion of inspiration, too.

"Just watching that ordering format, we went, ‘Now that is how you would get pizza at lunch,’" said Elise. "That was the gaping hole. Literally we left that Chipotle and I knew. I looked at Rick and said, ‘We’re going to open a pizza restaurant aren’t we?’ He said, ‘Yes we are.’"

The two had been pondering their next act after selling Wetzel’s Pretzels to a private equity firm in 2007, with Wetzel’s again changing hands in 2016. But with that money in the bank and the experience of growing to more than 300 locations, they knew they had to go fast. Rick is the archetypal idea man who simply can’t sit still while the zen-like Elise charts the brand’s north star. They got to work before their burritos had even digested.

"We happened to be qualified to make a run at it, so we said, ‘Lets go,’" said Rick.

From the first conversation, they designed the brand to grow at a rapid clip. "We knew it would be competitive and we knew it was going to go very, very fast. If anyone was going to own the market, they would have to move quickly and execute extremely, extremely well," said Rick.

Keeping that growth from being a chaotic mess, however, meant an early investment in people, systems, processes and other growth investments well ahead of the actual restaurant count. Mizes, a seasoned franchise executive, came on as CEO when there were just two restaurants. Executive chef Brad Kent was there before the first store opened in 2011, as was the store design team.

Financing was never an issue either, but Rick’s founder motto is simple: "We get out of the way and let the smart people do smart things.

"When Elise and I founded the company, we went back to our original angel group, that’s where LeBron came in, the original group that helped us fund Wetzel’s," said Rick. "We didn’t need an angel group, but I like to have a couple of smart people on the board that can help steer decisions."

Having basketball superstar LeBron James in the mix also helped with early awareness.

"At the beginning, we put a huge emphasis on social and digital and LeBron has been a huge asset. So we regularly see tweets that say, ‘When are you coming to this market?’" said Elise, whose chief goal is to create "Blaze fanatics."

On the operations side of the business, she said creating a transparent company was especially important to get franchisee attention.

"We behave in complete transparency. We don’t take any rebates, which is very unusual. I think that shows what kind of partner we’ll be and we expect that in return from them. That’s a real gesture of goodwill and that, coupled with the frequency and quality of communication, it is very above the line," said Elise.

Getting a little extra income from the raw goods rebates is a common practice, but she said they would rather have strong partners build out their revenue stream. The star power and those attractive terms meant some 6,000 prospective franchisees from which to pick and choose. "We spend a lot of time up front finding folks that are both humble and hungry and want to grow with the organization," said Elise.

The bulk of the franchisees are successful multi-unit operators looking for their next diversification. And they signed some major players very early, validating the concept for other sophisticated players with the right cultural fit.

From left, CEO Jim Mizes and co-founders Rick and Elise Wetzel at their Blaze Pizza store in Pasadena, California. "We spend a lot of time up front finding folks that are both humble and hungry," said Elise.

"Most of our franchisees can’t grow with their other brands; they’ve already tapped it out," said Mizes. "If you’re in another brand and you’ve built your 10, if those people that helped you get there and don’t have new opportunities, over time, they will leave you. So it really is looking for the right partners who knew that their success was built on the great backs in their company that they want to give new opportunity."

Now that the team is focused on the next phase for Blaze Pizza, the priority is changing. Mizes likened their current investments and work on the company to raising a child—and Blaze just got through puberty.

"That 2- or 3-year-old, you know they want to be a 21-year-old graduate that gets a job and is productive in society. But you don’t teach that 3-year-old how to drive a car," said Mizes. "Our focus is now how to get to 600 or 700 with these next sets of tools like driving the car and picking the college. That’s the next layer of systems, people, and support and new franchise partners that are looking to grow."

That next phase also includes the possibility of going public. And a recent investment will help them in that direction. Like the first investment, a second round of financing in 2017 wasn’t necessary, but added another three board members after an investment from Brentwood.

"Brentwood was an amazingly good match for us, they’ve done Zoe’s, Veggie Grill, Pacific Catch and Lazy Dog and they’ve been a franchisee before in Taco Bell and Pizza Hut," said Rick. "I don’t look at it as a funding event, but it gave us the ability to work toward an IPO one day."

An IPO would be a graduation for the company, but there are some grand goals between here and there.

"Our goal right now is to become the fifth largest pizza company in the U.S., that would be behind the large legacy players," said Rick. "I think somewhere in four to seven years we’ll crack that $1 billion mark. Then we can turn our attention to running those guys down."

The team plans to hit $400 million by the end of 2019, the company’s sixth year of business. That is an aggressive sales goal, but for a company that has grown sales by 176 percent over the last three years, it’s not necessarily out of reach.