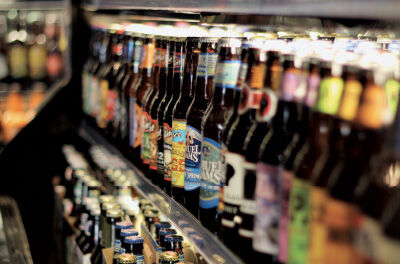 Historically, women were the brewers, including in ancient Egypt and Colonial America.

Women and beer haven’t always gone together like a horse and carriage—or love and marriage. For years their relationship was based on the woman being eye-candy in mainstream beer commercials. Real women sipped pink drinks topped with umbrellas, or wine, while men drank the beer in the family.

So what’s changed? Adding one word to the equation: "craft."

The craft beer movement has captured the palate of both men and women. There are even two national organizations that cater to females in craft brewing: Barley’s Angels and the Pink Boots Society. The difference between the two groups, according to Emmy Ross of the Minneapolis chapter of Pink Boots, is that Barley’s Angels is more about homebrewing and the consumer side of beer, while Pink Boots targets women who work in the beer industry. "Working in the industry" is loosely defined. It can mean everything from brewer to clerk in a liquor store that specializes in craft beer to making earrings out of bottle caps, Ross says.

"Craft beer took away the stereotype of beer as a blue collar drink," points out Lindsey Thomas of the Minneapolis chapter of Barley’s Angels. "It’s breaking new ground with ingredients…and (being) used in cooking."

At least 25 percent of beer consumption is by women, according to the Brewers Association out of Boulder, Colorado. That’s an impressive figure, especially since it’s a 2014 stat, and that number is going up for both millennial women and women over 50. Craft brewers now account for 12 percent of all beer sold in the U.S., reports the Brewers Association, and is a $22.3-billion industry.

It’s ironic that women are just now being recognized in the male-dominated beer club, because historically women were the brewers. In ancient Egypt beer was almost entirely brewed by women; a German nun discovered that adding hops to beer would give it a longer shelf life; and Colonial women brewed beer because the water supply was often suspect in the new country.

Author Gregg Smith in his Beer in America: The Early Years, wrote that while women were homebrewers, when money got involved men took over the brewing. Beer became even more masculine, according to an article in Beer & Brewing, when the "Mad Men" era marketers began to tightly define gender roles and created beer drinking as manly.

Craft beer’s popularity is helped by its sister, hard cider, which is more palatable to non-beer drinkers because of its fruitiness. Plus craft beer itself is constantly altering its ingredients. "We’re carrying a beer infused with grapefruit," says Robin Elliott, who along with her son, Clint, is the Loveland, Ohio, franchisee of The Casual Pint, a craft beer store with a bar. Elliott, who claims her tastes run more along the lines of margaritas than beer, is learning to like the liquid gold they’re selling.

Before becoming a Casual Pint franchisee, Robin Elliott had a 47-year career with McDonald’s, the last 26 as a franchisee. She’s now in the process of selling her McDonald’s units to her daughter, who became an operator in 2005, and embarking on a new adventure with her son. "Women feel comfortable," Robin says about the bar at Casual Pint. It’s not the traditional pick-up bar, she explains. It’s more like a coffeehouse atmosphere with comfortable seating and wifi.

For Clint Elliott, 38, who grew up working at his mom’s McDonald’s, it’s a welcome change. "It’s laidback; it’s not open 24 hours a day. It’s totally different," he says. He’s working 14-hour days to get the business up and running, he says, about their first month open, and plans are to open more. Their first location is ideal, he adds—a high-traffic area near a river with a bike trail and festivals.

Nathan Robinette, 35, started The Casual Pint in Knoxville, Tennessee, in 2011, as a craft-beer store with a bar. In his version, "store" is in all capital letters and "bar" is in a lowercase, smaller font. "Customers call us a bar, but we hold steadfast to store," he says.

A minimum of 22 beers are on tap at a time, and customers who find one they especially like can take a growler home. In addition, you can mix and match six-packs with the endless number of craft beers stored in the coolers. "It’s one stop for craft beer," Robinette says. "You can drink it onsite or take it home."

The stores only need a beer permit, but it’s been an "adventure on how different beer laws are," he says. Some municipalities don’t require the bar to also sell food, while others require 75 percent of sales to be food. "It’s insane," he says. The Casual Pint has 10 open and 28 sold.

Being a customer is one pathway to ownership. Alan and Natalie Knauth were celebrating Alan’s birthday at The Casual Pint in Knoxville when Natalie spotted franchise information on a coaster. She spent the rest of their visit filling out the form for more information. The couple had been looking for something entrepreneurial to do, she says. "I’m more a fan of entrepreneurship; my husband’s a fan of craft beer," she says.

Natalie, who has a master’s in public relations, runs the store while her husband keeps his day job as a pharmacist.

Robinette was ready to sell one of his corporate locations, so the Knauths waltzed into a turnkey store, where the permits were in place, as well as a staff. Staff does turn over, Natalie says because they’re in a college town and hire students.

Natalie does the ordering, but because she’s now pregnant she spends her time behind the bar picking customers’ brains about the flavors they like. And fortunately, Alan is there three days a week to help pore over the list of new beers.

Pregnant or not, Natalie feels very comfortable surrounded by beer. "Everyone in the craft beer industry seems to be in it together, male or female," she says.

Three people of diverse races, genders, ages, geographical locations and personalities will get the job of a lifetime—a paid summer internship to travel the world drinking beer and blogging about it.

At press time, World of Beer had just whittled 7,000 applicants down to semi-finalists, says Terry Haley, VP of marketing for the Tampa-based franchise. The winning skill set will include a thirst for the story behind the breweries, an authentic voice, quirkiness, cell phone video and picture taking expertise, passion for beer and, oh yes, be at least 21 years old.

The final three will be paid $12,000 each, plus travel expenses, to create content about what’s new and cool in the world of craft beer. Haley was in the process of writing out a detailed calendar as we spoke.

The 77-unit chain knew they were hitting a sweet spot with the job offer. Not only did it generate a lot of interest with the media around the world, but also applicants were flying into World of Beer locations to apply in person. Haley himself interviewed candidates who each got five minutes for seven hours straight.

The winners will be mentored by the writers at Draft Magazine, WOB’s partner, and content will be shared on multiple social outlets.