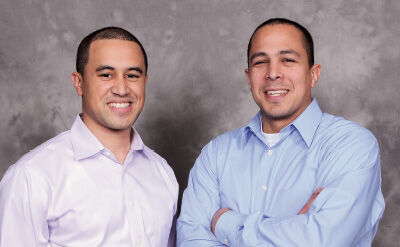 FASTSIGNS operators Woody Poole, left, and Milton Guerrero say they get “great resources” from their franchisor. Both men served in the U.S. Navy as chief petty officers.

Young veterans fresh off the base are often targeted by unscrupulous recruiters with too-good-to-be-true propositions, like "veteran’s discounts" that are anything but, or investment opportunities that do far more for the adviser than the veteran. Franchising isn’t immune to this kind of hucksterism—although many solid opportunities exist, prospective franchisees need to be cautious.

Rob Bond is president of the World Franchising Network in Oakland, California. He is an Army veteran and publishes a list of the "50 Top Franchises for Veterans" every year to let prospective franchisees know which opportunities are best.

He says franchising is a great opportunity with the right company, and veterans usually make excellent franchisees. But he also points out that many franchises are not good investments and people who have gained their experience in the military rather than the business world need to be careful about buying in.

What do the numbers say? About 66,000 franchises, or one in seven, are veteran-owned (about proportional to the total percentage of U.S. adults who are veterans). But information on success rates is harder to come by. Air Force veteran George Eldridge is the head of the International Franchise Association’s VetFran program, and works to promote the 660 IFA members who offer veterans a discount of 10 percent or more. He says veterans’ discipline and work ethic help them do well at franchising, but the data are anecdotal at this point.

"I think it’s a better fit than average," Eldridge says. "You have many more stories of success than failure. But it’s difficult to say a certain type of person is better when you don’t have the numbers on a large scale to prove that."

One high-profile case involved Subway franchisee Leon Batie Jr., who was deployed to Afghanistan in 2005. While he was dodging IEDs, the chain seized his stores for falling behind on rent. A Dallas judge ruled Subway had violated the Servicemembers’ Civil Relief Act, and Batie’s two-year legal battle ended with a confidential settlement in 2010.

Neither Subway nor its lawyers commented at the time beyond saying the case was over.

More commonly, though, veterans who struggle with their franchisors don’t end up in the headlines. Sean Kelly and his website, unhappyfranchisee.com, cites many examples of veterans who were burned by franchising, including the following.  In 2013, U.S. Army veteran Amber Robinson became California’s first franchisee of Rutherford, New Jersey-based NY Bagel Café. NY Bagel Café specifically targets veterans with a $5,000 reduction on the franchise fee and rights to a second store at no additional cost.

But the California Department of Business Oversight says NY Bagel Café was never registered to sell franchises in the state, and senior corporations counsel Joanne Ross says the company is under investigation. Robinson’s store went out of business in just five months.

CEO Joe Smith didn’t return a phone call, but wrote in an email the franchise never happened. "Rest assured NYB does not sell franchises in registration states," Smith writes. "If you’re looking for any other information regarding the company feel free to contact our legal team."

Matco Tools has drawn criticism from some veterans. The company offers veterans a $10,000 military incentive and runs an educational outreach program called The Colors of Freedom that seeks to educate veterans on business opportunities. It also has a robust turnover rate. Franchise disclosure documents show between 2007 and 2011, 1,112 franchisees out of 1,423 left the system: a 78 percent churn rate in five years. Between 2012 and 2014, another 539 franchisees left the system (out of 1,520 total).

While a class-action franchisee lawsuit alleging fraud went to arbitration in 2011 (results were not publicized), other distributors and franchisees are still speaking out. Army veteran Todd A. Peterson, who served from 1988 to 1991 and was stationed in Korea, has led a multi-year effort to warn others. He’s started a petition, a Facebook group and a website to explain his allegations of route manipulation, unfair termination, and a policy of misleading franchisees and then churning them through the system.

"Matco churns 250 to 300 franchisees every year like clockwork," Peterson says. "They forced me into a situation where I wasn’t going to be profitable."

Matco officials would not comment for this story. But former distributor Irvin Baker would. Baker was in the Air Force from 1978 to 1982 and went bankrupt after about four years with Matco. He says Matco assigned him a low-wage route that involved much further driving than he was led to believe would be required. He claims his training was inadequate and he wasn’t provided a copy of his contract.

Of course, these veteran complaints don’t necessarily indicate a widespread problem, and apart from the veteran incentives, their stories don’t differ greatly from non-military franchisees who have problems in franchising. Because no one keeps aggregate numbers, conclusions are hard to draw.

But on the other side of the coin, veteran franchisees who have had positive experiences—and there are many—and their franchisors can offer best practices for making it work. These are just a few examples, but the principles they bring out are broadly applicable.

After six years in the U.S. Army Reserves, Montgomery County, Pennsylvania’s Edward Robbins found a list of veteran-friendly franchises and began researching his options. He was looking for a reasonably affordable concept (so, not foodservice) with no red flags. He says it’s a good sign when a concept is transparent and doesn’t push for a quicker signup.

Toronto, Ontario-based home inspection franchisor Pillar to Post offered a 10 percent veteran discount and won Robbins’ trust by being open about the sales numbers he could reasonably expect.

"Basically they told me it was an opportunity to get business," Robbins says. "Sure enough when I bought the franchise that’s what happened."

Fellow veteran and Sarasota, Florida, Pillar to Post franchisee Steve Williams offers similar advice. After eight years in the Army and a stint in Iraq as a gun truck commander, he was attracted to the veteran-friendly nature of the program. He says veterans should look for fellow veterans in franchising and hear their honest opinion before signing up.

"It was the positive intake from the other veterans that I had asked around about," Williams says. Pillar to Post execs, he believes, "help veterans get on their feet."

Mark Jameson is executive vice president of franchise support and development for Carrollton, Texas–based sign and graphics company FASTSIGNS. For veterans, the company offers 50 percent off the initial $37,500 franchise fee and has been flexible about its normal timing requirements if veterans are about to retire or concerned about a deployment.

But Jameson doesn’t think every veteran should jump on board. The company has strict net worth requirements ($80,000 liquid, $250,000 net worth, credit score of 700) that serve to screen out weaker candidates. That’s because true veteran-friendly franchising means refusing to sell to someone who is unlikely to succeed, not signing up weak candidates for the sake of a franchise fee.

"Certainly, for someone with less experience with the military, they probably don’t have the net worth requirements," Jameson says. "Anyone who’s retiring from the military" or is more senior "tends to be more of our candidate."

Ultimately, franchising can be a very good fit for a veteran. VetFran’s Eldridge says veterans provide a good return on investment and with the right company, they’ll find success.

"At the end of the day you don’t mind getting dirty and working hard," Eldridge says. "I think it’s an attitude and the ability to follow a model or structure and operate in that to achieve success that makes a veteran great for franchising."

Before marching into a potentially bad business situation, here’s how to get the lay of the land. These tips are relevant to all franchisees but particularly important for veterans.

In the military, you move as soon as your commanding officer tells you to move. But in the business world, you should be the one setting the timetable. If a recruiter tells you to make a decision before you’re ready, walk away. Rob Bond of the World Franchising Network says veterans are especially vulnerable when steep discounts are on the line.

"Somebody’s dangling a $15,000 carrot in front of them and they’re told they have a week to make the decision or it’s going to go away," Bond says. "And they make the wrong decision."

Those currently in the trenches usually have the best intel. Ask them about their experiences. This is doubly important if you’ve been out of the civilian business world for a few years as unscrupulous recruiters are experts at selling a false dream.

"The most important thing for a veteran prospective franchisee is to call as many existing franchisees as possible and see if they’d do it over again and recommend it to their kids," Bond says. "That’s critical and especially for a veteran who may not have the business acumen they should have."

Turn your military training into a franchise fit by picking a concept that works with your skill set. Entrepreneurship already involves a significant amount of uncertainty, so if your job was quite regimented and systems-driven, you should pick a franchise with a very detailed, tried-and-true model. Senior officers can use their leadership skills to succeed in a concept modeled on a large number of part-time workers (like some home healthcare concepts) as opposed to a few full timers. Vocational skills like engine repair can be an asset, too.

Franchise disclosure documents have excellent information on profitability and litigation, but can be hundreds of pages long with the bad news squirreled away in the fine print.

Unless you served in the JAG Corps, you’ll want to ask a franchise lawyer for help. Bond says there are also helpful guides available online that show importan metrics.

"You can go and see how many franchises have failed," Bond says.