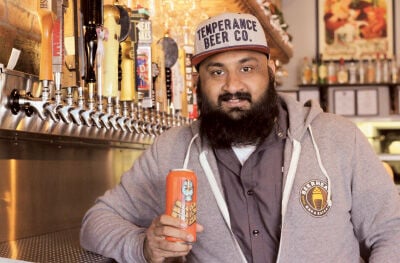 For Krupal Patel, it was a can of Daisy Cutter Pale Ale. Dry, with notes of citrus, papaya and mango, that beer, from Chicago brewery Half Acre, set Patel on a course that’s led him to home brewing and, more recently, to becoming a franchisee of Beerhead Bar & Eatery.

"That was five or six years ago," recalls Patel of a friend handing him that first craft beer. "I used to drink Corona, other mass market stuff."

A craft beer convert, Patel was first a customer of what was then The Beer Market in Schaumburg, Illinois, before signing a franchise agreement in early 2018 to purchase the corporate location and recast it as Beerhead Bar & Eatery at the same time the young franchise was rebranding its other locations.

"The biggest thing that stands out is their focus on local beer," says Patel, who compared other craft beer-focused concepts and even considered opening a bar on his own before going with Beerhead. "At other brands, they mandated certain taps, and I only had 10 to play with. Here I’m able to be creative with my own beer offerings."

Patel left his auditing job at a public accounting firm to focus on Beerhead full time, an admittedly big move but one he felt confident making, especially after reviewing the brand’s financials.

"Every year the financials were going up," says Patel, who pored over five years’ worth of sales and revenue information. Beerhead’s 2018 franchise disclosure document reports average total revenue of $2.25 million for two franchise locations and $1.17 million for three company units.

With no prior foodservice experience, Patel spent a month working every job at the restaurant, from cooking its menu of sandwiches, pizza and beer bites to bartending, serving and working the floor. Through his first year of operation he’s found success connecting with local brewers to make collaboration beers available only at his Beerhead location and says while there are challenges that come along with joining an emerging brand—"Sometimes it’s tough communicating what we actually are experiencing in the store"—he’s not looking back.

"On the plus side, it’s a growing brand, they’re opening in big locations and getting some big marketing for us," says Patel. "I didn’t want to be a number in a huge system but be a family as we grow."

One of those big locations is across the street from Wrigley Field, where Beerhead will open in the new Addison & Clark complex in the Lakeview neighborhood. When it opens in March that location will provide high visibility for a brand co-founder Greg Goodrich says is poised to take off. "We just sold a three-unit deal in Frisco, Texas," notes Goodrich, to go along with a three-store agreement in Ohio.

Seven-unit Beerhead is trying to stake its claim in an increasingly competitive craft beer-focused restaurant segment that includes the likes of The Brass Tap and Tap House Grill, which in 2017 grew sales by 30.3 percent and 18.6 percent, respectively. Goodrich says his concept stands out by creating "a little more of an upscale experience" while also filling the role of "your local pub." There’s also its astounding beer offering, which includes 50 taps and another 450 rotating bottles and cans.

"In any given year we have close to 2,000 different brands because we rotate," says Goodrich. "And we don’t carry Bud Light, Miller, Michelob, any of those." He also calls Beerhead a "bottoms up brand," meaning it wants input from its franchisees.

"They know better than anyone else what their local market wants," says Goodrich.

With friend and Cleveland restaurateur Pasquale Donofrio, Goodrich opened the first location of what was then called The Beer Market in Vernon Hills, Illinois, in 2012, and added four more in just three years. Wanting to expand via franchising, the brand underwent a name change and redesign in 2015.

"The original name we came up with quickly and then we found people were confusing us with a retail store," says Goodrich. "So we wanted a more clear name and one that was more protectable from an intellectual property standpoint."

The redesign also brought more attention to Beerhead’s food pairings and the brand is searching for an executive chef to increase its appeal beyond beer, a "logical step," notes Goodrich. "We’ve already created the beverage experience that we want, so now we want to be able to expand our customer base."

With locations spread out in Illinois, Ohio, Pennsylvania and New York—and opening in Michigan and Texas—the focus now is on adding franchisees to fill in the Midwest. With a footprint of 3,500 to 4,500 square feet, it’s a concept that can work anywhere, says Goodrich, and has proven successful in the suburbs, strip malls and downtown city centers. Beerhead’s initial investment range is $533,000 to $901,000.