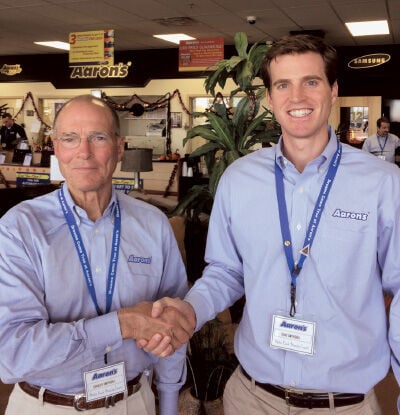 When Charles Smithgall III brought his son Chas onboard, it took more than a handshake.

Since January, Charles Smithgall III has been living in a 250-year-old house in the safest city in Mexico, studying Spanish daily and eating elegant breakfasts for the equivalent of USD $4. "I’m the only American here. They call me El Gringo," he says proudly. On weekends he goes deep-sea fishing, and chats with his 50 closest Mexican friends, all of whom speak to him in Spanish. His wife has elected to just visit from Atlanta for now, he says, of his new home away from home.  Once he’s mastered Spanish, he’ll move on to another project, piano lessons—and perhaps live part time in Spain. "My wife says if I move to Spain, she’ll go with me," he says with a hint of a smile in his voice.

Meanwhile, back in Atlanta, his son Charles "Chas" Smithgall IV is leading the charge at the business Smithgall built—SEI/Aaron’s Inc., 104 rent-to-own stores in 10 states that is the largest franchisee in the chain. The father-son duo has been planning the succession for five years, but it took a few twists and turns to convince the Harvard Business School grad to join his father’s company instead of striking out on his own.

"My dream was to work with my son, but I didn’t want to pressure him," Smithgall says. "One day he said, ‘Dad, what would you do if you were me?’ I said, ‘If I could take a $150 million company and take it to a billion, rather than starting from scratch, I’d do it.’" But he also told his son that he had the intelligence, education and fortitude to take either course.

"My dad had a laissez-faire approach to raising me," Chas says. "Anything I did was great. If I had one base hit or 10, I was doing great." Smithgall’s father wasn’t quite as supportive. Which brings us to one of the reasons Smithgall is living in a centuries-old city on the Gulf of Mexico with two forts on either side of the city to ward off pirates.

"I wanted to leave the country so no one would call me and second guess (Chas)," he says. "He’s going do a hell of a better job than his old man. We just had our most profitable year."

Chas Smithgall knows he had a privileged upbringing. He and the clients Aaron’s serves are worlds apart. "I grew up more or less with a silver spoon in my mouth," he admits.

When Chas was 15, his father’s career took a U-turn. He sold his controlling interest in a cable TV business to get into Aaron’s, after a friend introduced him to the concept. To help raise the cash needed to buy his first unit, the family’s lifestyle took a hit. "We thought he was a failure," Chas says about himself and his two sisters. "We had to move to an apartment. I was the only kid in my private school living in an apartment." The business, fortunately, was extremely successful.

After earning a degree in commerce from the University of Virginia in 2003, Chas worked as an analyst for a boutique venture capital group in Atlanta. "I got to see early- and late-stage companies," he says, "but I aspired to be more like our clients than the intermediaries."

His father’s company continued to grow, and "I knew it would flatter my dad if I went to work with him. We have a good relationship," he says. But before he committed, he says he wanted to bring more to the table. Since real estate is an important component to franchisee companies wanting to grow, Chas moved to Manhattan and joined the real estate group at AIG. This was before the company’s struggles, he adds.

Harvard Business School was on his radar, but first he moved to Hartford, Connecticut, where he spent time as an Aaron’s delivery driver, doing collections and talking to customers. "It was an eye opener to see how most of Aaron’s customers live," he says. He especially remembers delivering a big-screen TV to a single mother’s house. The woman had no sofa or other amenities, but she had several young children running around getting into mischief. The TV wasn’t a luxury, he discovered, so much as a babysitter so she could get some work done around the house.

"It made me think," he says, and to evaluate whether Aaron’s lives up to the Harvard Business School’s mission to "educate leaders who make a difference in the world."

At Harvard, he took a class called "Business at the Base of the Pyramid" that was taught by Michael Chu, an expert in social impact investment. The professor only had international case studies, so Chas wrote a paper on Aaron’s rent-to-own business so students could debate the merits of the company and whether its business model had both financial and societal value. The purpose of any business is to solve a problem, Chas says, and the class determined that providing furniture, appliances and electronics to low-income people who would not otherwise be able to have them, was a needed service, that was also profitable. Chas and Chu still teach the class, and Smithgall says Aaron’s is the beneficiary of the equivalent of free consulting from some of the best business minds in the country.

Once Chas decided to join his dad’s business, he spent four months in Mexico to learn the language a high percentage of Aaron’s customers speak. He also sees Aaron’s future expansion to be south of the border. While in Mexico, he met his future wife. They are now expecting their first child, which is the other reason Smithgall is learning to speak Spanish. "When the grandkids come, I know I’ll be spending time in Atlanta," he says.

But not at the office. Chas says his father’s management style has always been to delegate. "He’s the company cheerleader," he says. To make the transition smooth, Chas spent six months learning the business from the bottom up, and then six months shadowing his dad. The COO, who Chas reported to early on, now reports to him. But since the plan has always been that Chas would take over, it was a matter-of-fact transition, he says.

Not every son would do so much due diligence on his father’s company. But when you have the lofty goal of saving the world, you need to understand everything that’s achievable socially and financially—so you don’t have resort to running for president.