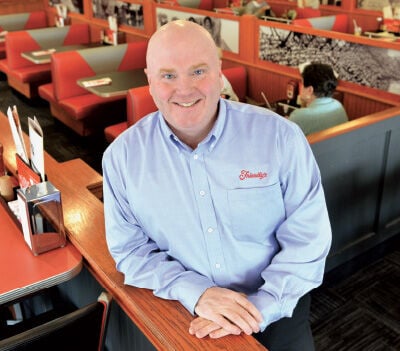 CEO John Maguire is pushing a remodeling program at Friendly's, after many other changes.

Friendly’s CEO calls recent high-profile closures ‘medicine that should’ve been taken years ago.’ His tough approach to right the brand includes a mandate to be, well, friendly. Turns out that’s not as easy as it sounds.

Some struggling brands falter quickly, while others can wither on the vine for decades as stores, menu, customer base and reputation all go south. Such was the case with Friendly’s, an 80-year-old casual eatery that’s been serving burgers, sandwiches, fries and ice cream along the East Coast since 1935.

Many of its oldest stores were aging poorly or located in commercial areas that had become less desirable over time. Worse, some recent high-profile closures harmed the brand. After emerging from bankruptcy protection in 2012, the company has a bright future as it nears the end of a dramatic reinvention, according to CEO John Maguire.

The latest round of trouble hit Friendly’s last fall as franchisee Apex Eagle Hospitality closed all 14 of its Friendly’s locations in Ohio. Then, less than two months later, J & B Restaurant Partners, based in Long Island, New York, closed 12 of its own Friendly’s stores and filed for Chapter 11 bankruptcy protection as part of a restructuring plan.

While the local headlines didn’t help a company looking to shed its bankruptcy baggage, Maguire sees both recent mass closings as evidence the brand is "taking medicine that maybe should’ve been taken years ago," he said. "Coming out of this the other end, the brand and individual franchisees are much stronger for it."

The former COO of Panera Bread, Maguire took the helm of Friendly’s in 2012 after its trip through bankruptcy court allowed it to shed nearly $300 million in corporate debt. Since then, the company has conducted a wide-ranging research project including focus groups to study attitudes, awareness and other favorite restaurants of Friendly’s frequenters.

What did the research show? "We found that the headline was your people aren’t friendly, your food is mediocre, your restaurants are dirty and you don’t fix anything in them when it breaks," Maguire said. "That was a telltale sign for us."

That solution gleaned from the research has come to involve four priorities: people, food, store remodeling and marketing.

"It was a dirty little secret at Friendly’s that we just weren’t that friendly," Maguire said of large-scale staff changes that resulted in turning over 6,500 of its 8,000 employees.

The goal, he added, was removing people who weren’t willing to provide exemplary customer service, while also implementing training systems to support quality employees that were being overshadows by people "who didn’t have the right attitude to be in the business."

Its research showed the menu had grown too large, so Friendly’s cut back by 35 to 40 percent to focus on its signature items: burgers, SuperMelt sandwiches, fries, fried seafood and breakfast offerings.

Food quality was improved with a move to fresh, not frozen burgers, real ice cream in its milkshakes, better fish and bacon, and extra-large eggs.

The final component—remodeling and marketing—may be the company’s biggest challenge, as 75 percent of its locations had not been remodeled in the past 12 years.

With a $125,000 "all-in" cost for franchisees, renovations are comprehensive, including everything from paint, carpet, booths, table tops and in-store art to completely change the look and feel of its restaurants.

Friendly’s is remodeling all 134 of its company stores, while 30 percent of franchise locations are already remodeled, with another 25 to 50 franchisee locations taking the plunge by the end of 2015.

Aral completed two store renovations in 2014, with two more underway this year. He says guests noticed the positive changes, largely focused on the dining room, bathrooms and the building exteriors. He said the changes quickly resulted in a 10 to 15 percent increase in topline sales, a return on investment that he said was "very positive."

Under Maguire’s leadership, he added, Aral has been included in the decision-making process and kept abreast of the corporation’s internal thinking.   "As a partner, investor and someone who has seen many things, I’m very confident if we continue in the direction we are in," he said.

Friendly’s also has a new location opening up at Boston’s Logan Airport, and a new prototype being opened by existing franchisees this year. Its new prototype is a traditional Friendly’s in appearance, but with 110 seats and located in an end-cap or in-line location.

Maguire is looking for new franchisees who have experience in the restaurant business, have their own infrastructure from accounting to HR, are well capitalized ($3 million required net worth) and have local market knowledge.

To help propel the brand out of its doldrums, Maguire says the company is focusing on its differentiation within the restaurant marketplace, and making painful decisions that are setting the company up to continue growing its restaurant count. "We’re ready now to start to grow," he said, and added he views the company’s progress as being "at the opponent’s 30-yard line," ready to start charging toward the end zone.

With most of the heavy lifting and dark headlines behind them, Maguire and his team are focusing on creating a better system to support franchised locations. Slow growth this year, he said, will lead to quicker growth that harkens back to the breakneck opening pace he helped manage at Panera.

"To get to opening 100 to 125 locations a year, which is what we did at Panera, you have to start by opening three to five per year," he said. "As we show success, we’ll be able to rocket up that growth pace for Friendly’s."