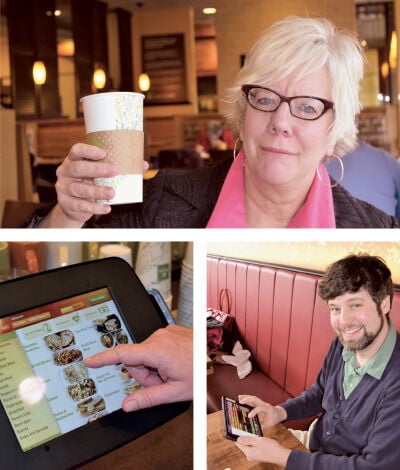 Beth Ewen used the kiosk to order her cappuccino at a Panera, top and above left, but was too slow compared with the real person who helped her colleague. Tom Kaiser, above, tried out a tablet that servers can use at Giordano's, although our server doesn't like them. 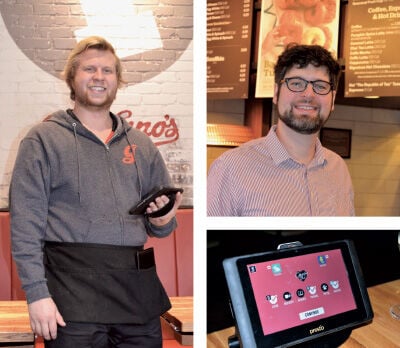 Jeffrey, above, our delightful server at Giordano’s, doesn’t like to use tablets because he prefers face-to-face interaction. Top right: FT’s Tom Kaiser liked ordering from a person at Panera, because she helped him sort his options. Bottom right: Tabletop tablets at Applebee’s provide a fun distraction, but we weren’t smart enough to figure out how to use them to pay.

Beth: So many restaurant chains are rolling out initiatives to use tablets, but then have pulled back or changed things from their initial announcement. Chili’s, Buffalo Wild Wings, Applebee’s…

Tom: It only makes sense that there’s a learning curve in trying to replace people with machines in places where customers are going to expect a human interaction. I don’t like the social component of everything, like Elaine in Seinfeld. Theoretically this should be right up my alley, but I look at it with some distrust. Everybody looks at the whole robot thing as a bad sign of the times, where we’re all becoming obsolete.

Beth: What do you think of the attitude, "Hey, people who want the $15 minimum wage, meet your replacement in fast food—the machine."

Tom: We’ve perfected automation so well, we need a new way for people to engage in the workforce. That reorganization is going to be a big part of the future. But when people say, "Here’s your replacement," that really sucks. What do you think?

Tom: It can change your whole day. I think it’s bad for society if you limit those kinds of interactions with people who are outside of your personal bubble.

Beth: When was the last time you interacted with a tablet, and liked it?

Tom:  I was tired at LaGuardia coming home from IFE last summer. It was glorious not talking to people. I really needed chicken noodle soup and a Sprite. Delta terminals are so nice, where it’s all tablets. You can order food or check your flight status with somebody else’s battery power.

Beth: LaGuardia is where many tablets were recently out of order, though. Plus, I have to emphasize my disdain for tablet ordering at a bar. What is left of humanity when you ask a bartender for a drink, and he reaches around and punches in your order on the tablet in front of your face? Am I supposed to pour out my problems to a tablet, too?

Tom: OK, enough philosophizing. We’re now at Panera, where you can either use the "fast-lane" kiosks, and order off a tablet, or go the other direction and talk to a person.

Tom: Do you need more time?

Beth: I do! It’s going to time out in 10 seconds. Look at how time-consuming this is. If I were working with a person they would already be done. OK, I need to choose a beverage. Definitely not a green passionfruit smoothie. I think a large cappuccino. It’s been a long weekend. Oh, we’re supposed to take a beeper and put in my number. How much time has gone by, Tom?

Tom: How did you enjoy that experience?

Beth: Again, this is why I like people because they can zip right through, boom, boom, boom. People who are trained to work here are better than I am at this.

Tom: I’m going to test that theory by ordering from a person, the old-fashioned way, but I have no idea what I want.

Whitney (the staff person): Are you interested in a breakfast sandwich?

Tom: Yes, one that doesn’t have a lot of cheese in it.

Whitney: I can take the cheese off any sandwich you’re interested in.

Tom: I’ll do a latte with soy, no dairy, please.

Whitney: We do not carry soy, but we do have almond.

Whitney: Have a great day!

Beth: That was way faster, Tom. Just over a minute working with a person. And she is an enjoyable person. Thanks, Whitney.

Tom: So far, people one, robots zero.Would there have been some sort of advantage if the restaurant had been insanely busy?

Beth: If there’s a humongous line, I can see the kiosks helping. The thing about front-of-the-house restaurant jobs, you think they’re easy but to do them well, they’re really not.

Gaming the system at Applebee’s

Beth: So here we are at Applebee’s, and they have small Presto tablets on each table. Once the server sets you up and takes your initial drink order, you can order another round of drinks from the table. You can also order additional appetizers or desserts, but only a limited number of items.

Tom: The printed menu is more confusing than the tablet.

Beth: We asked our server what she thinks of tablet ordering, and how did you interpret what she said?

Beth: Plus she mentioned you can call your server and then the red light blinks on the tablet, but people will see her at the table right next door and push the button anyway. That would be annoying. You’ve been a server. What do you think about that?

Tom: Giving someone an outlet to call a server instead of bottling up that anxiousness would probably chill out the high-maintenance people.

Beth: If you want to get in on the half-price appetizer it doesn’t show up on the tablet, which is annoying. On the other hand, there are games on this tablet. What do you think of these fun questions: I picked the "couples quiz," and then you have to add $1.99 to pay. "What’s your partner’s least favorite chore?" is question one.

Tom: This is for a lonely, distressed person that has wandered into Applebee’s without a phone or a book.

Beth: Here comes your appetizer. Ooooh, listen to that sizzle. That dish looks beautiful, and it’s sizzling hot. And you ordered that from our server. How long did it take?

Tom: No more than five minutes.

Beth: I’ll order from the tablet now, to add to our delicacies. We can only order so many things here, appetizers or desserts, or you can order drinks only if the server has already ordered drinks.

See this is where you need a server, because the server could tell you what’s on happy hour if you’re confused. So I‘m going to refer back to the printed piece. Here we go: the chicken wontons are on happy hour. Doesn’t that sound good? I add that to my cart and our server told us they added an extra step so they don’t have kids goofing around on the tablet. Wow, that was easy.

Tom: Look how well we did!

Beth: Well, a work date. I guess it’s time for us to pay, huh, Tom? Let’s get out of our game now because we were having so much fun. I wonder what’s going to happen with my leftovers; I need a doggy bag. Can I put that in the tablet? Oh, they don’t put a tip on, do they?

Beth: Well, that was worth it. Hmmm, where do I slide my card? We might need to edit this part out. In my defense, that light is glaring, so I can’t see where to run the card.

Tom: Maybe do it like this…. [fumbling with tablet]

Beth: Do you think I’m being charged like seven times now?

Tom: No offense, but I hope so.

Beth: This is awkward. Oof, our quest to be independent is foiled. Maybe we should ask our server to help us. This is definitely a flaw in the system.

Tom: And that symbol on top, what does that even mean? To be continued.......

Beth: Well there you go, wow, we were really lame customers. I’m going to say it. Now we’ve been to two places and the score is: Robots, zero. People, two.

To use or not at Giordano’s

Tom: We’re checking out Giordano’s now, where we’ve been told the servers are armed with tablets to take your order, our third iteration of the trend. But I don’t see any servers with the tablets, do you?

Beth: Here’s our server, and his name is Jeffrey. Jeffrey, why aren’t you using the tablets?

Jeffrey: We started out at the beginning so we all trained with the tablets. It was nice learning on there, but I personally don’t like them because I like the interaction, and I like to pay attention to the table.

Tom: Do you feel pressure from management to use them?

Jeffrey: It’s fully up to us. We know where they are, and we just have to grab one if we want. One of the servers here swears by it, Dorian. For me it’s another thing to worry about. I also work at a bar and grill, and we just use POS systems. And I also work downtown at a nightclub. This is the first place I’ve worked with tablets, but I still don’t use it.

Tom: Is there a difference among other servers when it’s really busy vs. really slow?

Jeffrey: When it’s busy it really helps out, because it frees up the POS system so it’s faster. It takes a server off the floor from a POS system. I know there are places that use a program through their cell phones, and I think that’s would be a lot easier. I would rather use a cell phone, since it’s my personal property if I break it.

Tom: That’s interesting that you say that because when I found out that Giordano’s had tablets, I wondered about breaking it. I like the idea of being someone else’s property and not mine. If I broke it I’d be like, "Sorry, boss."

Beth: How old are you?

Beth: When you go out to a restaurant, do you use tablets?

Jeffrey: The only thing I’ve done is Applebee’s, and to be honest it was more of like … it’s there to mess with it to see how it works. I personally don’t like it because I’m in the service industry. If you use it you just turn into an expo.

Beth: Tom, what do you think of a server who doesn’t want to use a tablet?

Tom: You want to be impressed with your server, knowing they remembered your order and care about you, rather than the computer reminding them. It’s just not the same. There’s no empathy or compassion in doing it that way.

Beth: You have to wonder about Giordano’s, when they spend a bunch of money on these tablets, and then they think, "Oh great, nobody wants to use them."

Tom: Maybe, although if they’re trying to turn tables faster, when it’s busy it would be a good idea.

Jeffrey: I don’t use pen and paper, either. I make mistakes, but I go by my memory. A lot of people get caught up in talking.

Beth: [When Jeffrey leaves] When he took my order he forgot that I wanted the sausage pizza, and he had to come back to ask. I’m just saying. What do you think is the score after this experience?

Tom: This one’s a draw, because it’s personal preference, and there will be people that think it’s convenient, and others who like the old way. I’d say two for humans, one-half star for machines.