Skip to main content
You have permission to edit this article.
Edit
Home
Newsletter
Magazine
News
Top 400 Franchises
Resources
Share This
1 of 2 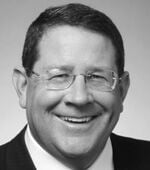 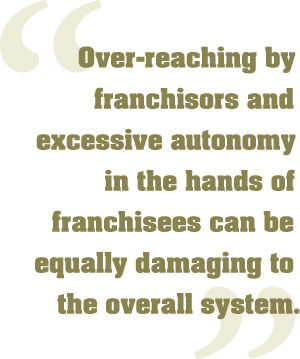 Franchise agreements are frequently criticized as being over-reaching in protecting the franchisor. While criticism is justified in many cases, more and more franchisors are realizing a balancing of the parties’ interests is necessary for long-term success of both franchisor and franchisees. This month, Jim Wahl and Ryan Palmer, two of my partners from our franchise group, collaborated on some of the reasons those often-criticized provisions continue to exist and the "middle-ground" positions certain franchisors are embracing.

Covenants against competition are standard, necessary franchise agreement provisions.    However, franchisors are realizing their best prospective franchisees are already in business operating similar businesses. In the restaurant sector, for example, it is common for successful operators of one concept to build the infrastructure required to support a multi-unit operation only to reach a limit on expansion. A franchisor who hopes to recruit this successful operator cannot have a non-compete covenant that prohibits its franchisees from engaging in any other restaurant operations—that broad a restriction will eliminate the type of successful operators it needs to attract. A reasonable limit on the restriction will need to be reached.

Exclusive territory provisions are commonly sought by franchisees to ensure a buffer zone protecting them against competition from other systems’ units. However, effective market development generates brand awareness and allows more effective advertising. There are a number of ways to balance the franchisees’ legitimate need for protection from competition against the franchisor’s interest in market penetration. All begin with careful analysis of the demographic market served by a typical unit. While a protected radius of a number of miles or a territory bounded by city, county or other governmental boundaries give a simple way to allocate territories, these rarely account for the travel and shopping patterns of an actual population. In some cases, the tension can be addressed by granting a multi-unit developer a territory in which to locate a number of franchised businesses. The developer then makes determinations, based on demographic data, about how the units can most effectively be placed to capture market share without units drawing customers from each other.

While all franchise agreements require reporting, franchisees are generally reluctant to share financial information with the franchisor.  Besides basic privacy concerns, franchisees generally have a legitimate right to structure their financial affairs as they see fit. However, for the system to develop effectively, accurate information on the core metrics of system performance is essential for both franchisor and franchisees.  In today’s lending environment, it has become crucial for franchisors to make Item 19 financial performance representations that enhance franchisees’ ability to obtain financing. Further, without having accurate financial input from franchisees, the franchisor cannot fulfill one of its expected functions, namely early identification of underperforming units and targeted advice on steps the franchisee can take to improve results. The key is not just gathering information, but providing a key systemwide matrix for the franchisee to improve their performance and to adjust concept issues to create greater profitability.

Most franchise agreements put control over collective advertising solely in the hands of the franchisor. Tensions frequently develop between franchisees—who believe they are the best judges of how to effectively advertise in their markets—and the franchisor’s need to establish a uniform brand image for the concept. More systems are including franchisee involvement in the form of advisory groups or other formats, over advertising placement and implementation. In addition, franchisors with new or emerging concepts sometimes consider suspending national advertising fees or delaying implementation of the fees until the system is mature enough to benefit from a national or regional advertising strategy.

The best approach to sourcing requirements is to take a tiered view of restrictions. Certain inputs such as proprietary private-label products and specially formulated ingredients are essential to maintaining uniformity. Below that level are those inputs that must consistently meet objectively defined quality standards, or brand-name requirements.  Franchisors should approve one or more suppliers, and allow franchisees to propose alternative suppliers.

Dennis L. Monroe is a shareholder and chairman of Monroe Moxness Berg PA, a law firm specializing in multi-unit franchise finance, mergers and acquisitions, and taxation. He can be reached at dmonroe@mmblawfirm.com.