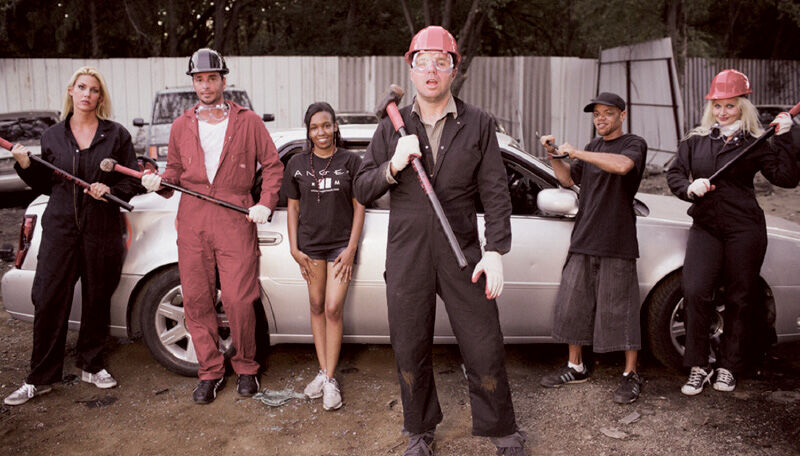 At the Anger Room in Dallas, people pay to break stuff, and these crew members, plus owner Donna Alexander (third from the left), demonstrate some of the weapons of choice.

Donna Alexander grew up on the South Side of Chicago so she knows angry people. She was just 16 when she says she came up with the idea for a place where people could take out their aggression without hurting other people or other people’s property.

The place she envisioned as a teen has grown into her full-time business, the Anger Room, where people pay to break things in either a living room setting, an office or in a room filled with glass. A baseball bat is the No. 1 choice of weapons, with a golf club a close second and a crowbar trailing in third place. Music selections are mostly heavy metal, but she has had requests for classical music. So far no one has requested show tunes.

And yes, you’re right, the office setting is mostly chosen by disgruntled employees who sometimes bring pictures of their boss or annoying coworkers to tape onto the mannequin before swinging a bat at the effigy. Computers get smashed, as well as coffee cups, desks, chairs or whatever a normal office setup would have.

In addition to lone wreckers, the Anger Room has hosted team-building activities, bachelor and bachelorette parties and even birthday parties, where one of the anger-producing props is balloons. "We used to have cake, but it got too messy," Alexander says.

Breaking up is hard to do

Venting sessions come in three price ranges: five minutes for $25; 15 minutes for $45; or 25 minutes for $75. While it doesn’t sound like a lot of time, Alexander says, "five minutes of breaking things is a long time." It takes a lot of energy. Fifteen minutes is the most popular choice. Groups resort to tag team tactics to keep down costs and lessen the workout.

There’s no charge for the protective gear customers have to wear, which is especially needed in the glass room, where flying shards of glass can be dangerous.

It takes about five to 10 minutes to reset the room after a guest finishes destroying the décor. Most of the furniture and appliances are items that easily could have been heading to the dump, but instead are donated to her. Under the "Got Stuff?" button on the website, there’s a solicitation for items with the caveat that while donors won’t receive a tax donation letter for the  IRS, they can get discounts on an Anger Room visit.

The website also has a Lash Out page where people can express their anger through the written word. Right now it’s open to the public, but a note says that at some point it will be a closed site for customers only.

The first manifestation of the Anger Room was out of her Dallas home’s garage. It was so popular she moved it to a one-room site in an industrial park. The demand enticed her to once again move, this time to a larger location where she could have three different themed rooms. In retrospect, she said, she should have kept the first location open and had two locations.

Requests right off the bat

Alexander’s Anger Room is currently just one location in Dallas, but she’s had numerous inquiries about franchising it, and her documents are ready to welcome her first franchisee. What little competition there was originally has come and gone, Alexander says. Currently, a web search reveals an Anger Room in Italy where the clientele is mostly women, and a Rage Room in Toronto, where for an extra $20 you can bring your own stuff to destroy. Perhaps, a less kinder, gentler way to recycle?

The concept is meant as "entertainment," and not a substitute for therapy or court-ordered anger management classes. But still people leave feeling happier than when they came in—or at least vindicated.

"I’ve never had one person that’s not satisfied," Alexander says.