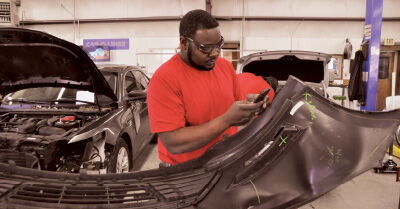 A Carstar shop in Lexington, Kentucky. Carstar expects to add 100 to 120 owners this year.

When Dean Fisher works with Carstar collision repair franchisees who want to go to the next level, he suggests handing out packets of sticky notes in different colors.

The shop’s owners use yellow notes to map what they believe is the work flow in the shop. Technicians use green to make their map. And front-of-the-house or admin people use pink.

Then they get together over a pizza lunch and talk about why the versions are all so different. "The very best thing that happens is that the back end of the facility knows what’s going on in the front end," said Fisher, a former franchisee turned chief operating officer of the Charlotte, North Carolina-based brand. Plus everyone can see the bottlenecks.

The exercise is one of many components of Carstar’s EDGE Performance Platform, which Fisher instituted starting in 2013. The acronym stands for Education & Development through Growth & Excellence, Fisher explained, and its breadth and depth displays his detailed approach to ‘zee support.

Fisher started his quest to make repair shops work better for his own facility back in 1992. "I recognized there were inefficiencies" at existing shops, he recalled. "I looked at huge, 25,000-square-foot boxes. I took that and built it into a 9,000-square-foot space," installing equipment in the floor, for example, to save space.

Now with corporate, he uses the myriad of detailed programs to help convince independent repair shops they will be better off as Carstar franchisees rather than staying on their own or selling to the aggregators that are gobbling up auto shops. "We’re very competitive," he said, during an interview at Carstar’s annual convention in Chicago in July. Carstar added 50 owners in 2017; 100 in 2018; and expects to add 100 to 120 this year.

Carstar U is the brand’s main training vehicle, and like most processes at Carstar, Fisher and his team recently gave that an overhaul, too. "Two years ago we tore it down. We decided to segment it to specific job roles," also linking with major vendors to embed their processes in the online training modules. A utilization of 57 percent a few years ago has grown to 90 percent, he said.

The modules are helping franchisees such as Kelly Domer, who with her stepfather has two shops in Colorado. Like most operators, she counts hiring technicians to be her biggest challenge. "You can’t find them any more," she said. Using training from Carstar and industry program I-CAR,  "we can grow our own technicians."

In the past, she says, "If you could get your hands on a body you’d just throw them to the wolves." Now, all roles in the shop are required to complete a certain amount of training every week. Insurance companies have long required this, but now OEMs, or the original equipment manufacturers like Honda and Ford, are requiring it, too.

"Three years ago no one scanned" a vehicle, he said. "Now you do that" first and last. "We have a guy that all he does in scan cars."

And those equipment needs? Cross’s operation bought new scan tools for $30,000 last year. A couple of years ago when aluminum cars came to the fore, they spent $150,000 to gain certification.

Fisher, not surprisingly, also has a process or two to help franchisees with the labor problem, notably an analysis of all jobs in the shop utilizing an A, B or C level tech, with "A" being the top tier and "C" being the entry level. "We’ve done studies that show 65 percent of the vehicle can be repaired by B and C" techs, and his team shows franchise owners how to segment jobs that way.

Cross said falling behind on technology investments leads to a vicious cycle, when the insurance carriers send less and less work to your shops and the OEMs won’t send work, either. The game, noted Hinton, is simple to state but hard to achieve: "Just keep up." Added Domer: "Just keep swimming."