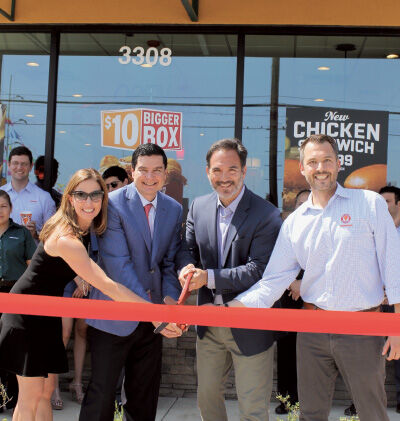 When its 150th Popeyes restaurant opened in July, Guillermo Perales and Dallas-based Sun Holdings crossed the 1,000-store mark with nine brands. There’s 293 Burger Kings to go along with the 150 Popeyes units, plus 94 Arby’s restaurants, 20 Golden Corrals, 31 Cici’s Pizzas, 18 Krispy Kremes, 160 T-Mobile stores, 80 GNC stores and 10 airport restaurants. Another 144 restaurants came from Sun Holdings’ purchase of Tex-Mex chain Taco Bueno earlier this year. "I’ve been multi-franchise since 2000," says Perales, Sun Holdings’ founder and CEO, "so I see us as one of the pioneers in looking for brands that don’t compete with each other." The labor shortage, increases in commodity prices and escalating competition are on Perales’ mind, but he believes Sun Holdings’ continued shift into the QSR segment will help mitigate some of those pressures. "We moved a lot to the QSR segment which I feel provides higher margins and is somewhat safer, with that convenience factor versus fast casual," he says. Proximity has also played a role in his strategy, with 90 percent of Sun Holdings’ stores located in Texas and Florida. "I think the fact that we’re in a lot less states makes a difference. It’s easier to operate," he says.

Only 16 percent of U.S. franchises have more than 100 units, and a mere 4 percent have 500-plus locations. Twelve percent fall in the 100-to-500-unit range, while 11 percent have between 25 and 50 stores. These were some of the FranData numbers shared by David Barr, chairman of the International Franchise Association, during his industry update at the Faegre Baker Daniels Franchise Summit August 1. A few more to mull over: While large multi-unit operators get much of the attention, single-unit owners still account for 46.2 percent of the franchise market. Franchisees with between two and nine locations make up a 30 percent piece of the pie; 9.8 percent own 10 to 24 units; 8.6 percent own 25 to 99 locations; and just 5.3 percent of franchisees have crossed the 100-unit mark. New brands continue to make their debuts. Since 2012, more than 1,740 brands have started franchising, an average of 300 new additions to the market each year.

"My inbox was flooded with emails and text saying congrats," recalled Susan Beth of the hours following NRD Capital’s announcement October 16, 2017, that it would acquire legacy restaurant chain Ruby Tuesday. "They all said, ‘I loved Ruby Tuesday,’ past tense." Beth, NRD’s chief operating officer, noted in the subsequent two years since the firm took the struggling franchise private it’s been focused on harnessing dormant devotion to the brand and improving the guest experience. "We have a very strong belief that that brand love and devotion is strong enough that if we can deliver on the basics—hot food hot, cold food cold, clean bathrooms and service with a smile—we can get them to love it again," she said. While she declined to talk about specific strategies for turning around Ruby Tuesday, Beth stressed the team was "incredibly focused on winning on the basics." "The menu got too big, so a lot of work is going into that part," said Beth, along with efforts to deliver a better customer experience, particularly as competition intensifies. "People are only going to give you so many chances. There’s too many options to not get it right."

Shaved-ice food truck franchise Kona Ice just passed the 1,200-unit mark, only 18 months after reaching 1,000. A key factor to the unit gains, said CEO Tony Lamb, is more existing franchisees adding trucks; the mix used to be 50-50 but this year is skewing 70 percent existing franchisees to 30 percent new. Those existing franchisees have been enticed to add units, in turn, by same-unit sales increases of 14 percent each year for the last three years, Lamb said. A new product line called Krafted is a hit, especially for corporate clients, with flavors like lavender, white wine spritzer and more.

Drive-Thru Times Slow Some During COVID