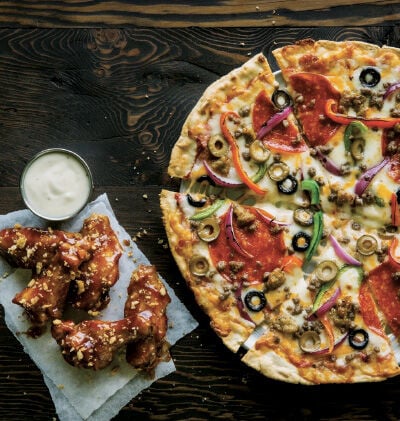 Pie Five is testing pizza delivery at two locations and is also trying out chicken wings.

Scott Crane joined Dallas-based Rave Restaurant Group as CEO in January, after the parent company of Pie Five Pizza and Pizza Inn had turned in some tough quarters and the former CEO was gone. Several months of research have led to some promising tests, especially of delivery at Pie Five. "When you want it, how you want it," Crane says is the mantra for customers today, and research showed people would increase their ordering if they could get Pie Five delivered to their home. The issue for the fast-casual pizza brand was logistics—how to adjust operations to accommodate more orders, and how to deliver the orders to the consumer. Pie Five is testing both third-party and first-party delivery. A new prototype for both Pie Five and Pizza Inn and catering at Pizza Inn are showing promise, too. Crane is best known as CEO of Smashburger for 10 years. Last November, before he joined Rave, Pie Five reported a 14.7 percent decrease in same-store sales for the quarter, while Pizza Inn’s rose by 0.2 percent. The stock was trading this October at $1.70 per share, down from about $1.78 a year ago. In other words, Crane still has plenty of heavy lifting to do.