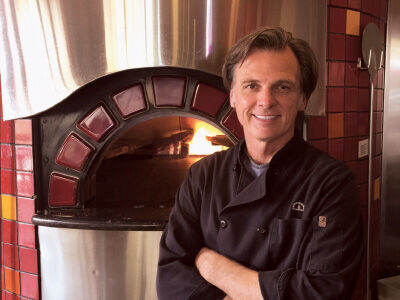 Jim Minidis is co-founder of RedBrick Pizza, which he sold to BRIX Holdings last year to concentrate on his foundation.

Travel the world. Hit the golf course. Start or buy another company. These are a few typical paths when founders cash out by selling their franchise to investors. Instead, Jim and Lynn Minidis are pouring their resources into their three-year-old foundation aimed at feeding hungry Americans.

Their franchise is RedBrick Pizza, started in 1998 in California with pizzas cooked in under three minutes, long before the current fast-baked artisan pizza craze. "We’ve always been very health-conscious, into exercise, and we understood what exercise and a healthy diet meant to your overall well-being. We formulated our products to be healthier than the competition," Jim Minidis says.

They started franchising in 2001, zoomed up to 70 locations by 2006 or so and then ran into trouble. BRIX Holdings, the Dallas-based franchise holding company, bought RedBrick last year and plans to re-launch the brand.

Sixteen restaurants are open now with plans for 15 to 25 per year beginning in 2016. BRIX is testing two prototypes, called Modern Milan and Classic Italian, and Minidis spends part of his time consulting with the new owners.

But their all-consuming passion is the foundation and its website, called One Family One Restaurant or 1F1R.com. Here’s how it works: Restaurants go to the website and post meals that can be sponsored by the community; restaurants also donate meals themselves "out of their generosity," Minidis says.

Visitors to the site can bring up a restaurant and donate any number of meals. Then an encrypted reservation number goes to participating food banks, which issue meal reservations "to food-insecure people they’re already working with and that they’ve already approved," he says.

"Then the hungry family comes in and dines in the restaurant," Minidis says, and it’s a sight to see. "I cannot begin to tell you what happens, the experience in that restaurant when you see not only the hungry family dine, but also the waiters, the waitresses, the manager and the owner experiencing this. There’s just a connection that takes place that is beyond description."

They’ve launched the site in Ventura, California, with nine restaurants and counting participating and more than 400 donated meals served. The next step is to begin a national tour to introduce the program, with a goal to sign up restaurants and food shelves and other participants across the country.

Minidis calls hunger in America a "hidden secret," and illustrates the need for education by relating this tale, when he was in Newport Beach talking with a group of executives. He said, "How many people do you think go to the food bank every month (in the area)?" They said, "Maybe 800 or 1,200." He said, "No, try 300,000 people. And how many get turned away because they run out of food?" They said, "No, that can’t be. This is Newport Beach, Orange County. And I said almost 100,000 people."

Jim, Lynn and their two sons started this undertaking about three years ago. Why? "Mother Teresa said it best: The problem in this world is we see our family circle as too small," Minidis says. "When you realize we’re all basically family, you realize that what you do with an open heart comes back to you with great abundance."

It’s an abundance he wishes for his franchise, yes, as RedBrick’s new owners re-launch the brand. But more so, he is working for heaping plates across America.