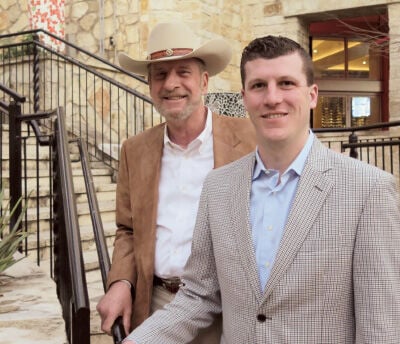 Gordon B. Logan smiles as he thinks back to his son’s first job with Sport Clips, the haircuts franchise Logan founded in 1993. The younger Logan, then a student at Southern Methodist University in Dallas, visited company stores for plan reviews, his dad paying him $100 per store.

"It gave him some beer money, I think," Logan says with a laugh.

Now, as the company celebrates its 1,500th store opening, Gordon Edward Logan’s role is much different and the expectations much greater.

"We’re preparing him to run a billion-dollar company," says Mark Kartarik, Sport Clips president and one of the younger Logan’s self-described mentors. Sport Clips took in $500 million in systemwide revenue last year, with an outlook of $600 million in 2016. That billion-dollar figure isn’t wishful thinking, continues Kartarik, and Gordon Edward, now vice president of operations following a promotion earlier this year, is ready to help Sport Clips get there.

"He’s got the credibility, he’s got the skill set," says Kartarik, who previously held leadership roles with Minneapolis-based Regis Corp., which owns franchises or has ownership interest in more than 9,500 salons worldwide. And the elder Logan agrees.

"He has the respect of our franchisees," stresses Logan Sr. "He’s not being promoted just because he’s my son; he’s being promoted because he’s the best guy for the job." Calling his son "my retirement plan," Logan Sr., 69, plans to promote himself to chairman "eventually," at which time his son will take over as CEO.

It can prove a tricky transition, however, when a child is groomed to take over for a parent. John Francis, now a franchise consultant and Sport Clips board member, knows this firsthand as the son of The Barbers salon founder Joe Francis (sold to Regis Corp. in 1999).

"When you’re the kid, the bar is set so much higher," says Francis, recalling times he would walk into the lunch room at the office and "everyone would stop talking. Everyone expects that everything they tell you goes straight to the boss, so it takes awhile to build those relationships."

Francis says early on he advised Gordon Edward to nix his "my way or the highway" approach and instead recognize the necessity for the entire team to participate in decisions. He also urged the younger Logan to be patient and work with those on the senior management level to ensure a smooth transition, noting "I didn’t have to tell him twice."

Gordon Edward Logan joined Georgetown, Texas-based Sport Clips full time in 2010 as the director of 32 company-owned stores after working as a consultant with Deloitte Tohmatsu Consulting in Dallas. That time at Deloitte, away from the family business, proved invaluable, says Gordon Edward, not only for its practical business experience but also for the confidence it gave him to go work at his father’s company.

"In our relationship, I think it was helpful so I could say, ‘yes, I can do this,’" says Gordon Edward. His mom, Bettye, who was running the company stores when he took the director role, has been another positive influence.

"It was good because we could be really honest with each other," says Gordon Edward of working with his mom. "We didn’t have to worry about playing politics, we could just get down to brass tacks."

Sport Clips has locations in all 50 states, plus Canada. With its strong track record and reputation within the industry, "simply not messing up what’s already working" is half the job, quips Gordon Edward. The other half is new ideas.

Enter Vent, the Logans’ take on the blow dry bar idea for women gaining popularity in places such as Los Angeles and New York City. Gordon Edward, who’s heading up development with his wife, Christy, says Vent is completely different from Sport Clips, with a focus on female consumers who want hairstyles they can’t achieve at home. Nobody has dominant control over this category, says Logan Sr., "so the potential is huge."

The plan is to open six to eight more Vent locations this year and begin franchising the brand by February 2017, likely offering it as another business opportunity to current Sport Clips franchisees.

"Franchising is what we do," Logan Sr. concludes, and it’s a family affair. The one holdout? "My daughter is a trapeze artist and I haven’t figured out how to franchise that yet."