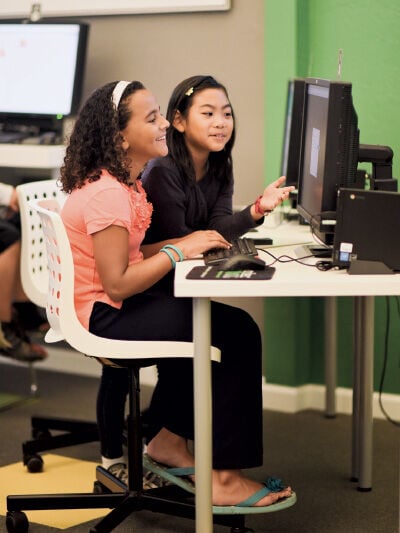 Coding isn’t just about getting to the ending, "it’s about the process," says Wayne Teng of theCoderSchool, where the girls shown above are digging it. 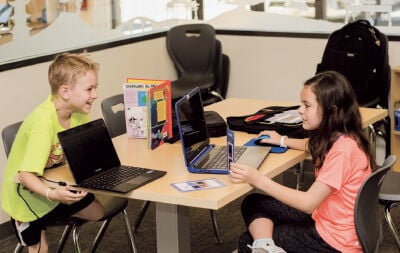 There’s a new breed of kids education, preparing them not just for the jobs of the future, but the logic of the future. If everything is digital, then kids today need to understand the basic logic of code.

A pair of franchised startups are among those taking on that challenge in the education space—creating a path to arcane code concepts without torturing the poor children in the meantime.

They each approach the challenge a little differently, but at the core, they let the kids themselves drive the curriculum—because if they’re not engaged, the knowledge necessary for the future won’t sink in.

What do trees and music have to do with learning to code?

To the leaders of theCoderSchool, Hansel Lynn and Wayne Teng, those very non-technical things are the key to learning the fundamentals of coding at their 20 locations.

At the core of the concept is the Coder Tree. The roots are foundational logic necessary to make sense of any language, the trunk is the various code languages and the branches are topics such as video games, robots or big data.

That might sound like some very Bay Area lingo, but Teng said he saw the results firsthand while he was running another franchise, The School of Rock. He was busy with operations, and turned his daughter on to an education website. She burned through the content, but was unable to answer the big "why?" questions.

"The way kids look at those things is they just want the get to the ending, but coding isn’t just getting to the end. It’s about the process," said Teng. "That’s when I released the music model—sitting with someone who is passionate and can teach you these things was the key ingredient."

So instead of building the concept around how adults learn to code (bashing your head against tutorials and lots of Googling), he wanted to start with the foundational logic that links all code languages.

"We continue building on something to make it more and more educational," said Lynn.

So if kids love tanks, educators might teach them how to make a tank game or a physical tank bot with a physical computer. If they also love big data (and what kid doesn’t), the educators might help them parse tank statistics to find patterns, or even tap into artificial intelligence in advanced lessons.

"They can get a tank right there on the computer and get it to move. As they do, they will build confidence and will start to ask, ‘Hey, what is a core loop,’ while you’re actually building and learning a project," said Teng.

"The kids don’t know they’re learning, they just want to get the tank shooting bullets, and then they want to make rapid fire and you just start working on the functionality as the coach," said Teng. "Then as they mature, they learn the fundamentals that are behind that."

As for operators, they say a software background is nice, but not necessary. It’s a relationship business first and foremost. The franchise fee is $29,950 and the average investment falls between $87,550 and $170,650 with a royalty rate of 5 percent.

Getting kids to code can be tricky. A screen of text, squiggly brackets and semicolons is just not as fun as blasting zombies or other enemies with lasers. That’s something Code Ninjas founder David Graham saw personally.

He had seen a Gallup poll that showed nine out of 10 parents wanted their kids to learn coding. So the entrepreneur with a history of adult coding camps tried to recreate the trendy educational method for kids. The squiggly brackets and semicolons didn’t really hold their interest.

"It just wasn’t fun, so we asked what if you could play games to teach you to code, so we got to 75 percent with that," said Graham. "But even that got boring. So what we’ve done is give them the path forward to write out their own imagination into a game. They build their own games and stay on the track we give them."

That’s when the idea clicked and became the foundation for the Houston-based concept that has grown to eight locations since 2016 with 206 commitments sold so far across the country.

Unlike adult coding camps or other short-term coding classes, Graham said the Code Ninja differentiator is the length of the program. The full program lasts four years.

"It goes all the way through the kids publishing to the app store," said Graham.

Of course, there are classes, camps and parents-night-out events during which kids can continue on their progress, earning belts from their sensei (teacher).

Graham said while it’s a long, in-depth program, it’s meant to be fun, not spit out professional coders but prepare them for the increasingly digital future.

"Our whole goal here is to not create professional, vocationally ready kids at 14, that would be ridiculous. We’re trying to give them the problem-solving skills for the jobs that don’t exist yet," said Graham. "If we can give them the underlying foundation of foundational concepts, no matter what they go into, medicine, law or programming, they’ll be better off."

On the operating side, it’s a relationship business and doesn’t require a technical development background, just a willingness to follow the program. Graham said they started out with the franchise model in mind.

"We’re built from the ground up to be a franchise support organization. We’re not going to say, here’s the curriculum, have fun, we thought about every floor tile to ceiling tile and everything in between," said Graham.