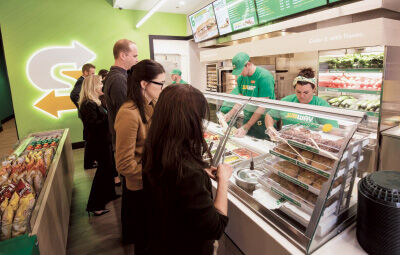 Inside an updated Subway that brings more attention to fresh veggies and customization.

There are a lot of large, legacy brands updating the look and feel of restaurants across the country. The trick is getting the operator to invest in a costly remodel with unclear or anecdotal return on investment.

There are all sorts of tactics that help systems accelerate updates. It’s a big ask from the brand in the many M&A transactions across the industry, loading up new buyers with renovation commitments. Showing off the benefits has been a driver as well. Across the franchised restaurant industry, operators see anywhere within a 5 to 10 percent sales lift in the year after an update as a fresh look and feel means customers new and old check out the newly polished restaurant.

At Subway, a pair of remodel programs called Fresh Forward and Fresh Start have been working through the system for a year and already more than 1,200 restaurants reflect the new design and another 500 are in the pipeline.

After closing more than 1,000 restaurants around the world in 2018, Don Fertman, Subway’s chief development officer, said the brand has seen some good traction as it focuses on unit-level economics and the new design of Fresh Start.

"For the last six months, we’ve been moving into positive territory as a brand overall and the remodels are helping drive that," said Fertman. "Based on the feedback we’ve gotten from some of our business development programs, there’s enthusiasm in the company. That is something that we haven’t seen in a while."

To spur that remodeling effort and drive that enthusiasm further, Subway created a new grant program that provides $10,000 for U.S. franchisees to help offset new decor costs. Fertman said the remodels are delivering similar results seen in other brands, but with just shy of 25,000 locations the company is looking to speed things up.

The grants cover what were two tiers of investment, but have since been dubbed simply the Subway redesign. And it builds off an $80 million investment in the FreshNOW program that adds new beverage stations or bubblers and tweaks to the sandwich line and menu boards to restaurants free of charge. The rest of the redesign includes decor updates and a new floor overlay, designed to be affordable. The decor redesign generally comes in at about $40,000 but can dip lower for non-traditional locations, said Fertman.

At 25 percent of the cost, the grants were meant to cover a substantial portion of the investment. "We said we got something that is a significant part of that investment and is very important to our franchisee owners. I think the number is right," said Fertman.

He said it’s a significant change, and anyone comparing an updated Subway to an older location can see that freshness was put front and center.

"For me, it’s the overall experience of being in there, everything from the station to pick up your remote order, the way it brings the convenience factor into focus to the way it showcases the protein and vegetables. The frescas that are in the bubblers create a real sense of freshness," said Fertman. "This is Subway’s commitment to the future.

There is a new landscape out there, the QSR industry is changing. With new competitors coming every day, consumers have more choices. Their expectations are evolving and it’s our job to evolve with them and be what’s coming next."

He said the development team is prepared for a wide pipeline of updates.

"It’s nothing that we’re not used to, we’ve dealt with volume. We understand throughput—it’s not just sandwiches you put through in a given restaurant, it’s how many floor plans you can get though the restaurant design department in a given day," said Fertman.

He said he hopes for the bulk of grant recipients to be signed up by the end of June, and for "several thousand" updates to be complete by next July.