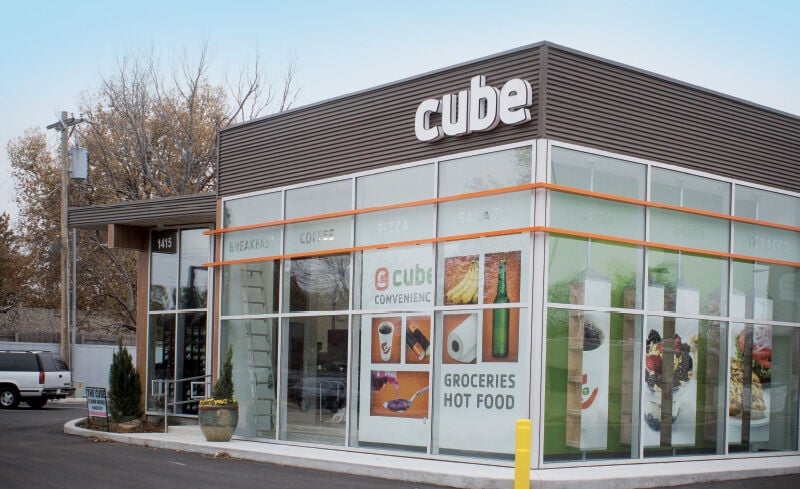 A Cube store is about half the size of a typical convenience store.

A new convenience store concept, The Cube allows patrons to buy items ranging from fresh sandwiches to lip balm without leaving the car.

Some 115 stores of c-store giant 7-Eleven plan to offer delivery in the near future, although that figure may change.

Huddle House has found a niche offering quality food served at the table, making it a popular option with many c-store operators.

Although the c-stores have always adapted to meet consumers’ needs, there’s now a growing number using innovative approaches like drive-thru and delivery options and apps to meet consumers’ rising demand for more convenience and provide them greater flexibility to buy goods.

Lower fuel prices and a gain in the sale of prepared food items contributed to record in-store sales of $213.5 billion in 2014, up 4.7 percent from 2013, reports the National Association of Convenience Stores in Alexandria, Virginia. Overall industry sales last year totaled $696 billion. The U.S. convenience store count rose to 152,794 stores as of December 31, 2014, a nearly 1 percent increase from 2013, according to the 2015 NACS/Nielsen tally.

"Consumers have already moved on this," says consultant Steven Johnson of Foodservice Solutions in Tacoma, Washington. "It’s the c-store lagging behind in the case of drive-thrus."

Based in Norman, Oklahoma, The Cube opened its first store there in December 2014. It plans to add three more stores in the city in the next 18 months. A Cube store is about half the size of a typical c-store.

CEO Joe Lawrence says data reveals, and customers affirm, the typical c-store model is not convenient for things like parking or self-service. He contends The Cube’s drive-thru model is less costly to build and operate. With plans to consider franchising, The Cube would cost about $1.5 million to open a store. Plans call for a 6 percent royalty fee on annual gross profit, with the fee waived the first year.

Lawrence owns the business with Bill Breedlove and Jake Sharp. So far, Lawrence says business has been good. Customers come back and bring someone with them. "We think our concept has broad appeal," he says.

Farm Stores is another drive-thru concept that plans to begin franchising, although little news has come from the chain since its initial announcement last spring.

Steve Montgomery, president of b2b Solutions, a Lake Forest, Illinois-based consultancy in the convenience retail/petroleum marketing industry, says the Farm Stores’ concept is very similar to one being offered by Swiss Farms based in Broomall, Pennsylvania.

Marking its first foray into delivery, 7‑Eleven began offering on-demand delivery in San Francisco and Oakland in California and Austin, Texas, in July. Plans called for 7-Eleven to add stores by late August in New York City, Miami and Seattle. The retailer has teamed with Postmates, a San Francisco-based tech and logistics firm with a network of couriers, to have items like snacks, food, medicine and even Slurpees delivered to customers. DoorDash is another partner.

So far, at least 36 participating in Austin are offering a variety of 7‑Eleven’s products. Raja Doddala, vice president of innovation and omni-channel strategy at 7-Eleven, expects to expand delivery later this year to other areas with a high density of 7‑Eleven stores, including Los Angeles, New York City, Chicago and Washington, D.C. The Dallas-based 7-Eleven hopes the new service appeals to customers who are more on the go, pressed for time and prefer fast-paced, urban living.

The company’s founder, Joe Thompson Jr., used to say 7‑Eleven’s mission was to "give customers what they want, when and where they want it," Doddala says.

"Through the modern-day technology that Postmates provides, we can fulfill that promise in a way we haven’t done before."

To reach more folks in Portland, Green Zebra Grocery is partnering with Instacart. Founder and CEO of Green Zebra Lisa Sedlar says the Instacart app allows people to easily shop online and have groceries delivered to their home within two hours. She added delivery has been a big convenience hit with the health-oriented convenience store’s customers.

Green Zebra operates one store in North Portland, has one under lease in Southeast Portland and plans to open three more in Portland over the next two years. Future plans call for opening 20 stores by 2020, in the Seattle, San Francisco and Los Angeles areas.

Other major c-store trends include a migration toward prepared food offerings, companies looking for ways to offer prepared food and interact with customers. Pizza delivery is one of the ways to achieve that, says Bill Walljasper, CFO at Casey’s General Stores.

Based in Ankeny, Iowa, Casey’s has about 350 stores that now deliver pizza. In stores where Casey’s introduces pizza delivery, the company typically sees about a 30 to 40 percent lift in pizza sales. By late next April, Casey’s plans to add pizza delivery to about another 100 stores. Plus, Casey’s plans to launch online ordering for pizza and submarines at some of its stores by the end of this calendar year. "We believe there are customers who prefer this type of service that we are not attracting," Walljasper says.

In a reverse tactic, Huddle House has for years been trying to make c-stores more appealing by adding full-service restaurants. The Atlanta-based company had 64 locations in various c-stores and travel centers nationally as of late August. It plans to add five more by April 2016.