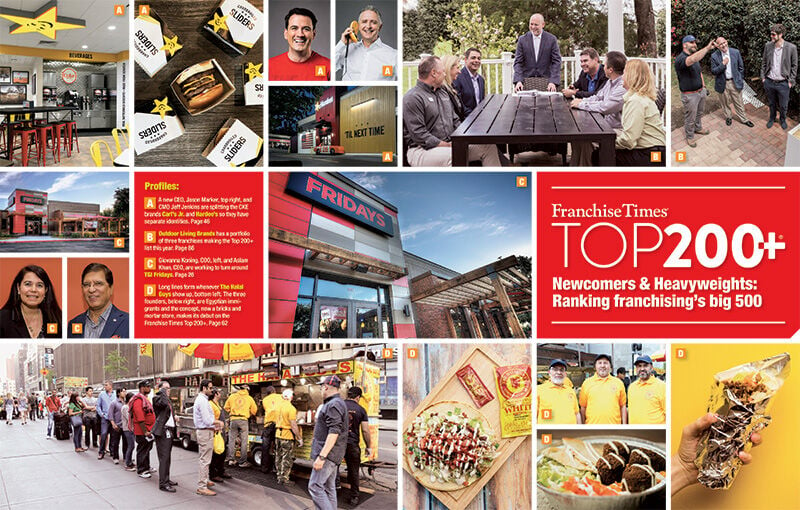 The largest brands in the Franchise Times Top 200+ keep getting larger, but there is plenty of growth across the exclusive ranking of franchised brands by systemwide sales.

McDonald’s retains the top spot. The company broke the $90 billion in sales mark for the first time as it added more than $5 billion or 7 percent to topline sales even while growing units by just 0.9 percent.

The rest of the top six held their lofty positions as well, adding significantly to sales.

There was, however, quite a shakeup for the rest of the top 10.

At No. 7, Domino’s officially surpassed Pizza Hut in the rankings. It even accelerated sales from the prior year, growing sales 12.4 percent—the strongest sales growth among the top 10—while growing its unit count by 7.6 percent. Those numbers make the company look more like a growth brand than a 58-year-old giant that rakes in more than $12.2 billion. In another tricky year for restaurants, the brand’s convenient, digital-first strategy worked well in 2017.

Strong across the board

That growth came from all across the list and just two segments were in the red (casual dining subcategory and the  printing  and graphics subcategory). The ubiquitous boost is illustrated by the number of double-digit growers. In 2017, 42 companies grew sales by double digits. That’s up from 33 companies in last year’s rankings, suggesting things are going pretty well across the franchise economy.

The best-performing class of franchised brands was services, reflecting the ongoing macroeconomic shift away from brick and mortar retail. Within that class, personal services grew sales by 11.4 percent, topping $19 billion in sales. Just behind was healthcare and medical services, which grew by 9.3 percent to $6.7 billion in sales.

Business and cleaning service categories grew by 7.9 and 6.9 percent, respectively. But don’t pronounce retail dead quite yet: The retail category ticked up some, growing 3.7 percent to $124.9 billion in sales.

The fastest-growing individual brand by far in the largest 200 companies was the fitness brand Orangetheory. The company saw 63.7 percent topline sales growth and 47.4 percent location growth. It’s been quite a two-year performance for the brand, which was the strongest grower the year prior as well, with 111.3 percent sales growth and 73.2 percent unit growth.

The next strongest sales growth came from Hand & Stone Massage and Facial Spa, which grew topline sales by 32.7 percent while adding 17.6 percent to its unit count.

Selling off corporate stores to franchisees is nothing new, but it came back in vogue in the last few years as large legacy brands sought to move toward an asset-light model with no or limited corporate locations.

The percentage of franchised locations in the top 10 jumped 2 percent, driven largely by one massive McDonald’s transaction. It unloaded more than 2,600 restaurants in China to a single franchise partner. The move is part of a plan to add more than 1,500 restaurants in the country via franchising. That took the brand from 85 percent franchised to 92 percent.

The top 200 added plenty of units in 2017, but it also closed a lot. Driven by Subway closures, the Top 200 actually shed 165 locations in the United States, but added 8,800 locations internationally.

How we rank the top 500 franchises

The Franchise Times Top 200+ is an annual ranking of the 500 largest franchise systems in the United States by global systemwide sales, based on the previous year’s performance.

In a five-month research process and building upon a database that began in 1999, our research team uses a combination of companies’ voluntary reports and publicly available data, including the franchises’ most recent franchise disclosure documents and Securities and Exchange Commission filings.

Systemwide sales is defined as the total sales for both franchise and company units. Those sales figures should represent sales to customers, and not corporate sales to franchisees or prospective franchisees, such as royalty revenue or franchise fees. Other revenue not directly related to franchising should not be included.

Franchise Times’ estimated revenue for hotels is based on a formula multiplying the chain’s revenue per available room (RevPAR) by the number of rooms and the number of days in the year. RevPAR comes from the company, or from industry estimates.

Research begins for next year’s project in late April. To submit your brand’s numbers or for more information, contact Franchise Times Controller Matt Haskin, who leads the research effort for Top 200+, at mhaskin@franchisetimes.com.