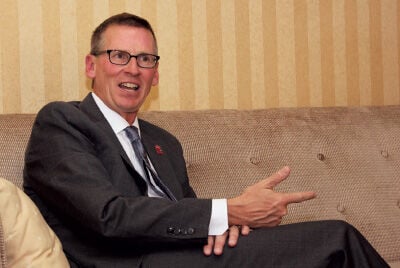 The breakfast menu was designed with low complexity in mind using current equipment and similar processes as Wendy’s traditional menu.

The way Wendy’s CEO Todd Penegor talks about company growth doesn’t sound like someone with a CPA background. He has a plan to invest heavily in international growth, pushing overseas markets.

"The big opportunity today is going back into Europe, we’re going to build company restaurants in the EU—120 restaurants in the next years," said Penegor during his keynote address at the Restaurant Finance & Development Conference. "We plan to double international sales from $1 billion to $2 billion in the next five years with 1,500 more restaurants."

Sounds a little crazy, right? And it would be if it were almost anyone else saying they’d like to add $1 billion in sales. But Penegor has a steady track record at Wendy’s thus far, something he credits to a strong franchisor-franchisee relationship.

"I joined the company and we were trading at $5.50, and we’re at about $21 today. But it’s been because we have a great partnership with the franchise community and they’ve grown with us as well," said Penegor. "It’s not just same-store sales, but investing on reimaging and new builds have all paid well."

And while he’s opening locations across the EU, he said business in the U.S. will evolve as well. Stateside success of late has been helping franchise operators forge ahead with new growth. Wendy’s starts by benchmarking the entire system based on financials, then utilizing those benchmarks to chart the course for near and long-term success.

"We do that annually but we meet on a regular basis to really do work that we call joint capital planning, we really sit down and talk face-to-face with the operator," said Penegor. "What do they have to invest in new builds, technology and make sure it’s paced and sequenced, and see where we have mismatches between franchise term, lease term and match those all up, make sure they have a healthy growth algorithm ahead of them."

He said the company will use the same mindset and focus on three key areas, what Penegor calls the three pillars for Wendy’s future growth: technology, breakfast and international expansion.

The latter depends on the company seeding growth in the European Union, and with large, strong operators in China and a handful of savvy franchise groups across Southeast Asia.

The technology pillar is less focused, with many innovations still taking shape. Digital delivery, however, has been a bright spot. More than 80 percent of restaurants are covered by DoorDash and the company boasts a delivery time average of just 30 minutes—the fastest on the DoorDash platform.

The company is investing in fully integrating delivery into the point-of-sale system, which Penegor thinks will shave three to five minutes off the delivery times as well.

Beyond that, the company has invested $10 million in scanners to speed things up at the counter, allowing employees to scan offers on phones or paper coupons.

Another $15 million went to broadly updating digital platforms, including the work around delivery.

But the most talked about pillar is Wendy’s big push toward breakfast. It’s something he and the company have gotten a lot of flack for after failing a few times in past attempts to shake up the breakfast daypart. But this time it’s different, said Penegor.

"You never want to hear that, but it is different this time," said Penegor. "I know there’s a lot of skepticism, people say we’ve failed three times. But we’ve never launched breakfast nationally; this is our first national launch. And we never brought the franchise community along the way we brought them along. We brought in our top 300 owner-operators about a month before our convention, before we announced to the street that we were going into the breakfast daypart."

He said breakfast has been in the works for a long time given those hard lessons of the past. It began with the franchise owners to come up with ways to leverage existing equipment so there were no big capital expenditures for operators or the company’s roughly 360 locations. Then the research and development team came up with 18 key items for breakfast, enough to provide a spectrum of value without over-complicating the operation. Then, the company invested $20 million to help fund the modest outlay for operators.

Penegor cautioned that it’s not going to be an overnight success, or even a big factor in 2020, but it’s an investment for the long term.

"As we looked into 2020, 2021 and 2022, we committed to spend in advance of the system on advertising. Basically we’re taking on the royalty income stream and investing that all back into the growth of the business," said Penegor. "From a profit perspective, we’re going to invest more than we collect in 2020 as an investment year. We expect to be breaking even in 2021 and start looking really good in 2022."

He said the biggest thing for franchisees is hiring three to four people to staff the morning drive-thru hours—essentially two to open and three to operate. The plan is to keep the dining room closed, breaking into the breakfast habit in a convenient and low-cost way.

"We know it will take some time, it’s a habit you have to break into, but once you break into it—you can think about all our own habits—you do about the same things every day," said Penegor. "You just have to break the habit a few times a month and you can have a huge business."