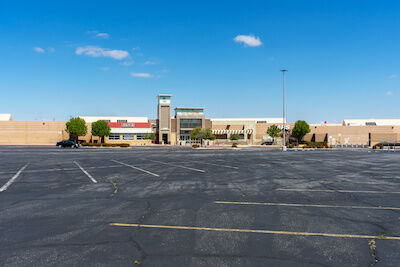 Victorville, CA / USA – April 13, 2020: Empty parking lot at The Mall of Victor Valley located in Victorville, CA, during the temporarily closure due to the COVID-19 crisis.

One not so surprising effect of the COVID-19 pandemic has been the intense pressure on mall retail. Social distancing and malls just don’t mesh, as is plain to see from the traffic data.

Simon Property Group, the largest global mall owner, reported that revenue was down 24 percent in the second quarter and it was still in negotiations to collect rent. It collected just 73 percent of rent due in July, up just slightly from 69 percent in June. CEO Davd Simon said he was "totally confused" by the slow ramp up. The company reported that 91 percent of retail outlets had reopened. He also lambasted municipalities for shutdowns and volatile guidance on social distancing.

But it’s really not that confusing. People weren’t flocking to malls prior to the pandemic, and they certainly aren’t now, as shown by Simon’s traffic patterns.

On average, mall traffic was down about 41 percent, with New York’s Woodbury Common a bright spot at only negative 8 percent traffic. Minnesota’s Mall of America is at the dismal end, down 75 percent. Without traffic, there aren’t sales.

The big classic malls aren’t the only sore spots in mass retail; big retailers everywhere are hurting. The switch to online shopping—or at least away from big boxes—is yet another trend accelerated by the pandemic. In response, the big boxes are pulling the plug.

The latest company filing for bankruptcy protection and closing hundreds of stores is Stein Mart—it’s closing many of its 300 locations. In all, 25 major retailers declared bankruptcy in 2020. Among the notable names are J. Crew, Neiman Marcus, Muji U.S., Pier 1 and J.C. Penny, but many others have expressed troubled financials. And when those big box anchors close, the domino effect of even lower traffic is going to be difficult all around the 116,000 U.S. malls.

Operators will be sure to dust off the co-tenancy clauses in their leases and seek reduced rent or outright termination. Operators of mall-focused franchises like Rocky Mountain Chocolate Factory (down 65 percent year-to-date) will have some tough decisions ahead and a unique challenge as malls look to fill those massive anchor spots.

Does a play area, food hall or Amazon distribution center (which may replace J.C. Penny stores) constitute an anchor? Watch for those arguments in court soon.