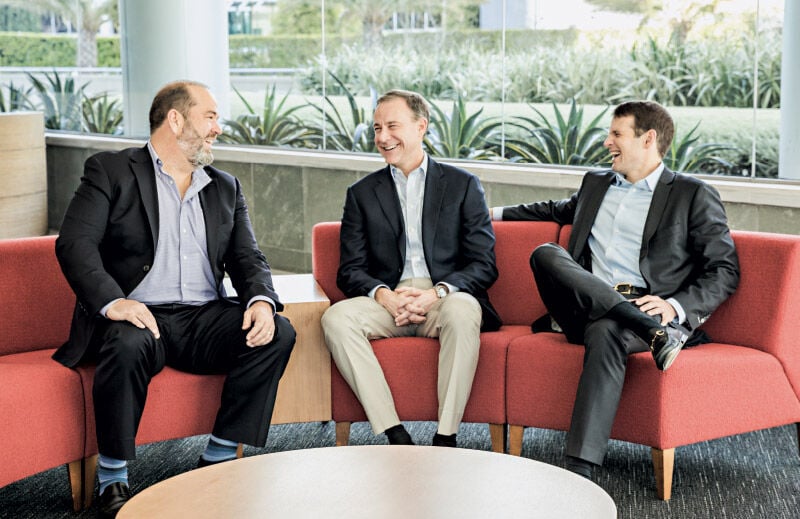 When Co-founder and Managing Partner Richard Fitzgerald walked into the CapitalSpring conference room on a typical sunny January day in El Segundo, California, I asked him about the 80 or so tombstones lining one wall of the room in chronological order.

The first in the lineup was an Eatza Pizza franchisee. How’d that investment turn out?

Not so great, he replied, smiling wryly. The investment was CapitalSpring’s first in the restaurant industry 15 years ago. It invested in a franchisee who had one location in North Carolina, which was outside of the franchisor’s core market. The franchisee didn’t have a lot of support from the franchisor, Fitzgerald explained. And that wasn’t all.

Road construction began in front of the store a few months after it opened and "traffic was severely, almost totally, cut off," he said. "He and the other businesses near him had headwinds out of the gate. There’s not a lot you can do."

Although he and fellow CapitalSpring co-founder Chris Unrath tried. They worked shifts in the store, and during road construction walked the neighborhood handing out coupons.

"We supported the business, but ultimately the operator decided to move on and do something else. It was the formative days of our firm, and there were some hard lessons," said Fitzgerald.

Years before, Fitzgerald started out as a private equity generalist, focusing on numerous industries, although not specializing in any of them. He found the restaurant industry when approached by an operator who wanted to sell his business to his second in command.

"We took a step back and thought, the restaurant industry is huge, and there have to be hundreds of people like this," he recalled. And, he felt there would be a competitive advantage in doing what most PE firms don’t: investing in one sector and becoming an expert in it.

CapitalSpring raised its first fund, $2.5 million, through friends and family, and Fitzgerald kicked in his own capital. "It was our money from our savings account," he said, "as well as friends from business school" and others they knew personally. It was used primarily to invest in preferred equity of single-unit and small multi-unit franchisees to finance development of new locations.

Fitzgerald knew they couldn’t approach larger operators of the prominent brands back then—their fund wasn’t big enough. And the franchisees in smaller brands "were the people who needed that type of capital."

While their first investment didn’t go so well—at that time CapitalSpring consisted of Fitzgerald, Unrath and an analyst working out of a windowless office in New York—they didn’t take what they learned on that investment lightly, or subsequent ones after that.

"One thing we like about the industry is it is fairly formulaic," he said. "The learnings you have on that one deal are relevant to the next one. And when you are doing the same thing over and over, you build an expertise."

Their approach was working, and fund two, raised just three years later, was about $45 million, with the same investment strategy used in fund one. "We could talk about some of the successful deals we had done, and what we had learned," said Fitzgerald, "and that was a compelling opportunity to the new investors."

Part of this fund was used to enhance CapitalSpring’s infrastructure. "We felt we had to build our team, and bring in people who were experts in operations. And we were getting more calls about investing than the capital we actually took in," he said.

But along came the financial crisis of 2008 and 2009, and things changed. As other lenders in the restaurant industry retreated, CapitalSpring’s team was privy to new opportunities.

"Suddenly those larger restaurant operators were calling," Fitzgerald said. During the crisis, "fundamentally, people were still eating out and demand did not fall off for certain brands."

Those larger franchisees wanted access to senior debt and equity so they could continue to grow. Fund two began to invest in first-lien senior debt, second lien, mezzanine financing and other subordinated capital. All of a sudden, CapitalSpring "was relevant to a much larger part of the restaurant industry," said Fitzgerald.

Fast forward to today, and CapitalSpring has raised a total of six funds, investing about $1.7 billion of capital through 190 transactions for more than 60 brands, including franchisees, franchisors and operating companies. It’s a moon landing away from that $2.5 million they started out with.

And the company has evolved: "If you are a PE fund, and you are a generalist, you have one product—equity—and you invest across many industries," said Chad Spaulding, managing director and head of originations with CapitalSpring, who joined the firm in 2013. "We are the exact opposite: We are a product generalist and an industry specialist."

Spaulding said they find out what the company needs first—what’s the capital solution? Debt, equity, both? The CapitalSpring team reviews about 300 restaurant opportunities a year. Once they land on the right deal for the firm, they may offer the operator three different capital solutions. It all depends on the situation.

"That still exists today," Erik Herrmann, CapitalSpring’s partner and head of the Restaurant Investment Group, pointed out. "We are investing in multiple parts of the structure, and there is a versatility of the way the funds are put together" so the firm can be creative. "We’re a one-stop solution."

The firm is looking for, as he described, restaurant concepts that have a daily demand. "The premise is that we’re going to wake up and have three meals. And, we’re oriented to the value end of the spectrum, with strong unit economics."

One of his concerns when he joined the firm back in 2010 was whether he would get bored just doing restaurant deals. The answer has been a strong no. "I haven’t done the same deal twice," he said.

In addition to getting the capital structure right for each investment, CapitalSpring also added an operations department while building its infrastructure years ago. Headed up by longtime restaurant management and turnaround expert Jim Balis, who’s managing director of the Strategic Operations Group, the team consults with each of their restaurant companies.

As Fitzgerald said, "To think about what we’ve learned over the past 15 years, it’s crazy." Sharing "the learnings," as he calls them, is vital to the success of both CapitalSpring and the brands in its portfolio.

CapitalSpring "doesn’t like to get involved in the daily nuances of running a restaurant business," said Mike Colonna, president and CEO of Norms Restaurants with 22 units. The firm acquired Norms in 2014, its first full ownership of a restaurant company.

"They are there to support us with strategic thinking, planning, site selection and major changes in the concept," Colonna said.

Norms is an iconic, 70-year-old family dining chain in Southern California that serves 8,000 to 10,000 guests per week per restaurant. When CapitalSpring purchased Norms, it was not a company in need of a turnaround.

"When you take over a heritage company like Norms you have to be careful," said Colonna. "In the early days, CapitalSpring was trying to figure out why this family dining chain was such an anomaly. We wanted to tweak it to make it better, but we talk about ‘evolution, not revolution.’ You have to be careful how you infuse change."

Because Norms is a value-oriented restaurant operating in a state known for its high minimum wage among other things, one of the areas in which CapitalSpring could tweak was to maximize its purchasing. "We ride on the coattails of their purchasing power of all their brands," he said.

"We try to find obvious ways to leverage the scale of all the businesses," Herrmann noted.

And, as Spaulding remarked, it can be as minute as "looking at the SKUs for straws. Why is there a difference in the cost" between companies? "We aggregate that data." They have to, he said, "because this is a pennies business."

Having that laser focus on the restaurant industry helps them understand the ups and downs operators face. "If the road in front of your building goes under construction, there’s no freak-out factor on our end," said Herrmann.

"Look, we know when McDonald’s turns on Monopoly," Spaulding added. "We know your sales might be down, and we won’t lean on you." Having all is this data "is another reason for companies to come work with us."

"They understand what it takes to run a business," said Colonna. "They fund your growth and development as long as you have a clear plan and objectives. They get in the boat with you—they are a true partner."

When asked where he wants the firm to be in five years, or 10, Fitzgerald paused and then answered, "I wouldn’t say we want to be twice as big. We’re looking for strong management teams that want to grow. I think just staying the course."

Added Herrmann, "Fundamentally, we’ve arrived at who we are."