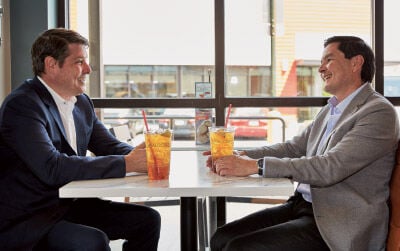 McAlister’s Deli has been around for 30 years. "We were fast casual before they called things fast casual," declares Joe Guith, president. When he joined the brand three years ago, he noted the longtime success of the restaurants in many markets and the history of "larger, very successful franchisees" in the 450-store system.

Guith’s thought: "Why can’t we have more? I think we hadn’t made the effort" in a concerted way. He talked to the sales and development team, "and said I think we should engage larger operators. There were people on a list, not a very long list, and one of those names was Guillermo."

That’s Guillermo Perales, founder of Sun Holdings in Dallas, who crossed the $1 billion mark in revenue across his empire last year including Burger King, Arby’s, Krispy Kreme and his acquisition of the entire Taco Bueno brand in January 2019. The deal started as a modest commitment. But once Perales got to work doing deals of his own to convince five separate franchise groups to sell their McAlister’s Deli stores to him, Perales ended up buying 51 stores across four states and the rights to develop 47 more.

"He wants to grow," Guith said about Perales. "It quickly went from probably what would have started as a 10- to 15-unit deal, all the way up close to 50. And that made it complex because it happened in waves."

Perales said he needs a big enough package to make it worth his while. "Competition, growth, things get harder because of the unit economics every year," he said. "So bigger is better, scale definitely is better. To jump into a brand just to develop from the ground up … it’s going to take forever."

"Here, our mentality is, you go in and create a large base, it’s going to be easier to build 10 stores or so a year. To build 10 stores, you have 50 stores to produce managers and train people. I think the larger the base the more capacity you have to build. Not only that, for McAlister’s there’s so much room to grow, that it’s easier for us," Perales said.

"So, you have scale on one side, and then you have territory on the other, so it’s not like you go into a Panera where every market has a lot, and there’s always encroachment issues," Perales said. "You go into a market, like El Paso has nothing, or Orlando has one" McAlister’s Deli, "so you can go in and build."

Guith believes brands that want to attract multi-unit operators have to make a plan. "I think you have to start with the end in mind," Guith said. "We took a step back and said, what does our growth look like? Two years ago we wrote a very detailed plan on how we could accelerate the growth of McAlister’s … to understand where we want to go and how we want to get there. And then it’s understanding who might be the best fit and opening strong lines of communication with that candidate."

The third piece to deal-making is flexibility. "Knowing that things can change and pivot, and that opportunity, like in this case, grew over time," he said.