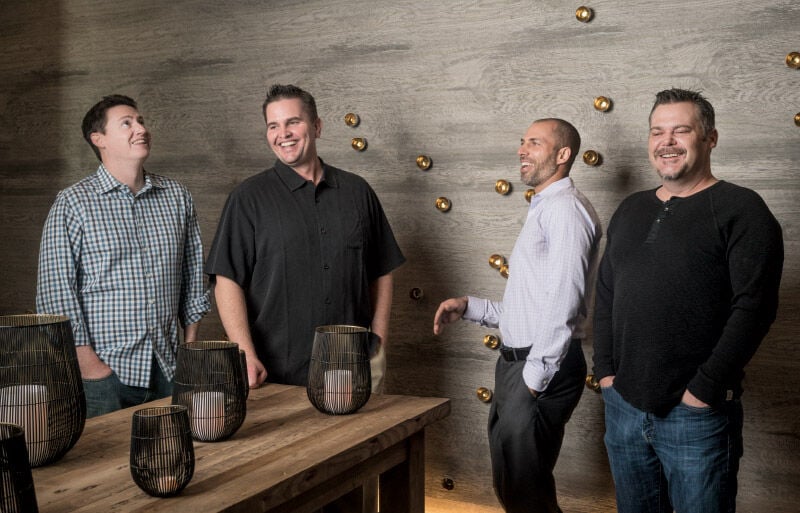 CEO Matt Hale, second from left, and co-founders of Modern Acupuncture, which attracted Strand Equity as an investor.

Modern Acupuncture is putting the expertise of its new equity investor, Strand Equity led by Seth Rodsky out of Los Angeles, to immediate use: doing due diligence to roll out a line of five to seven "pharmaceutical grade supplements," Chinese herbal remedies, to add to the acupuncture services performed at its studios.

"So, having a partner who has experience in that arena, from the R&D perspective, from the relationship perspective," said CEO Matt Hale, "we wouldn’t have had that if we couldn’t have done the deal with them."

The franchise is "sort of democratizing the access to the medicine, and we partnered with them, and lucky us," Rodsky said.

A second initiative for Hale & Co. is to pursue relationships with third-party insurers, who are covering acupuncture treatment more and more. Blue Cross & Blue Shield of Tennessee in 2019, for example, dropped coverage of certain opiates and replaced that with acupuncture, Hale said.

Third, nationwide initiatives by the Veterans Administration to use acupuncture to help service members look promising to Hale. "So we put together that discovery team to look at third-party reimbursement, and we’re going to beta test the possibility of living up to our mission" on a larger scale.

Testing new ideas while keeping the focus on today’s unit economics is tricky, but Hale believes that’s what franchisors must do. "We’re not going away from where we started, being a cash practice," he said. "But it’s having the ability to adapt, be forward-looking, seeing what the opportunity is in the marketplace, and it’s always changing."

Bringing in private equity is a first for Hale, and so far, so good, he said, after holding the first board meeting, in early February, since the investment.

"When you’re forming your initial partnership, there’s a tremendous amount of trust that needs to be on both sides of the table. You’re in a relationship that we’ve never been in before," he said, so detailing the roles and responsibilities of each party is a must.