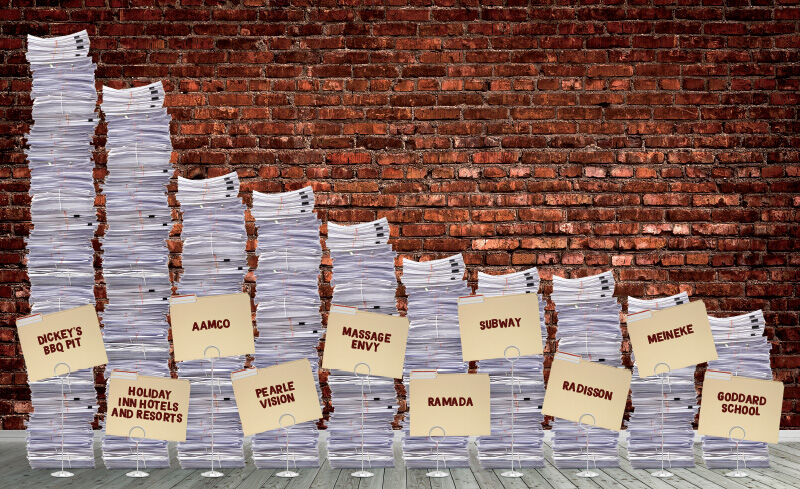 Franchises with the most lawsuits per 1,000 units

From breach of contract lawsuits to sexual harassment allegations and data breaches, most large franchises end up dealing with litigation at some point. But there’s a big gap in the amount of litigation each franchise faces: some almost never set foot in court, while others are steeped in legal battles.

Subway, for example, lists 855 cases in Item 3 of its franchise disclosure document, or about 20 per thousand units. McDonald’s, by contrast, lists 32 cases, or a mere one case per thousand.

On the other hand, 21 of the franchises examined listed no lawsuits at all, including 9Round, Lawn Doctor, Hungry Howie’s and Zaxby’s.

Franchise attorneys gave a variety of possible explanations for the gap, ranging from different opinions about which lawsuits are "material" and thus need to be disclosed; to opposite stances toward settling disputes without going to court versus taking a hard line; to the inability to make money at some brands and the rancor that follows.

After reviewing Item 3, which requires franchises to list any lawsuits deemed "material" dating back 10 years, in more than 380 FDDs and tallying up the number of lawsuits listed, we’ve created a complete ranking of how much legal turmoil is on each franchise’s plate.

Our list includes franchises in our Franchise Times Top 200+ database with at least 500 units, and ranks them by the number of cases filed by or against the brand per 1,000 units. (See related article on page 74.)

Dickey’s Barbecue Pit tops our list with 44 cases per 1,000 units, facing a variety of allegations including fraud, breach of franchise agreement and unauthorized closure of restaurants. While most disputes were resolved in individual arbitration cases, Dickey’s legal proceedings with Utah franchisee Campbell Investments and Maryland franchisees Justin Trouard and Jessica Chelton counted as multiple cases on our list, as the original suits were appealed from the American Arbitration Association to higher, federal-level courts.

Although Dickey’s was No. 1 in litigation per 1,000 units, this was partially due to its smaller unit count of 526. The brand faced just the 10th most total cases on our list when not adjusting for unit count.

Jeff Gruber, senior VP of franchise relations for Dickey’s, said fiscal 2017-18 was "a hot year for us," with "a lot of tumultuous stuff going on," and the number of franchisor-initiated lawsuits was an anomaly.

He said fast growth led to some of the problems. "We ended up with a good majority of owner/operators that are happy and healthy and proud to be part of the brand, and of course we ended up with some that the partnership didn’t work out."

The franchisor-initiated actions noted in the FDD, he said, "at this point are resolved and dormant. Further worth noting, we’re a third of the way through fiscal 2020, and we have zero initiated."

"It was a difficult patch but we feel like we’re out of it and back on track," he said.

Holiday Inn Hotels & Resorts wound up second on our list with 51 cases across 1,251 units. Much of the litigation concerned allegations of unpaid system fees and wrongful terminations of the hotel license agreement.

Parent IHG said in a statement it "typically reports more litigation than required by the FTC franchise rules. IHG is committed to protecting the trusted reputation of its hotel brands and enforcing the terms of its license agreements."

Pearle Vision, fourth on the list with 15 lawsuits before adjusting for unit count, said most were attributed to other brands/divisions under the giant Luxottica umbrella, its parent firm.

"As part of a global company, Pearle Vision is required to disclose litigation surrounding its specific business unit as well as that of other business units owned by the same company within Item 3 of the franchise disclosure document," Pearle’s statement said. "Within Item 3, only three of the cases involve Pearle Vision; two of which are specifically related to the franchise business."

Those 12 cases could just be the beginning. The 2017 Buzzfeed News article that exposed the breadth of the scandal reported that franchisee employees had allegedly assaulted more than 180 women. As a result, Massage Envy admitted in its FDD that more legal trouble could be coming its way, stating the brand "may be named as defendants in additional lawsuits by customers asserting similar claims." Massage Envy did not respond to a request for comment.

Subway ranked seventh on our list with about 20 cases per thousand units, but was involved in far and away the most total litigation of any franchise when not adjusting for unit count. The restaurant brand listed 855 cases in its FDD; the next highest in terms of total cases was GNC, with less than a tenth of Subway’s total at 82 cases.

The majority of Subway’s cases were franchisor-initiated lawsuits against franchisees. The restaurant brand also served as a defendant in numerous cases, including 13 class action complaints against the company alleging its signature footlong sandwiches measure less than 12 inches in length.

Subway said in a statement: "Subway upholds high standards to ensure that guests can rely upon the same quality experience at any Subway restaurant they visit. And all franchise owners who have invested in the Subway trademark should uphold those standards so there is consistency in guest experience.

AAMCO Transmission ranked No. 3 with 29 lawsuits per thousand units. Hotelier Ramada is No. 6 with 22 per thousand. Meineke Car Care Centers is No. 9 with 17. None of the three responded.

Radisson Hotel Group, ranked No. 8, said in a statement, "because we don’t have access to the Item 3 report created by Franchise Times, we are not able to comment specifically on its contents. We value our relationships with our franchise owners and operators as we collectively work towards our shared business goals."

The Goddard School rounded out the top 10 with eight total lawsuits for an adjusted rate of 15 per thousand, just a tick higher than a competing education brand. Goddard didn’t reply.

GNC also ranked in the top 20 in litigation per 1,000 units, largely due to a series of 27 cases alleging the DMAA and Aegeline contained in the nutrition company’s fat-burning supplement OxyElite led to severe liver damage. GNC did not respond.

On the other end of the spectrum, McDonald’s fared fairly well with this metric. Its 32 cases, when spread across the company’s 37,855 units, amount to less than one case per 1,000 units.

The most litigation-free franchises on this list were those owned by Yum Brands. Combined, Pizza Hut, KFC and Taco Bell listed just two cases, placing all three companies at under 0.1 cases per 1,000 units.

Jim Goniea is general counsel at Self Esteem Brands, parent of Anytime Fitness, who noted its remarkably low lawsuit count when interviewing two years ago. "I’ve spent most of my career as a franchise litigator, and to see a company of this size with virtually no franchise litigation was very surprising to me," he said. The reasons?

"The biggest one is the mindset, the culture. It’s a very collaborative culture with our franchisees, it’s not a confrontational culture."

He also credits a robust resale program so people can exit in a way that is "financially beneficial to them." Third is a flat fee model, rather than revenue-based, so everyone pays the same every month regardless of top-line sales. "It eliminates the friction point," he said.

Catherine Monson, CEO of FastSigns and a franchise with zero lawsuits in its Item 3, said, "It’s actually something I’m very proud about. We have never had franchisee-initiated litigation in the history of the company."

She cites an intense focus on being "the franchisor of choice," adding "we truly focus on helping franchisees be more profitable." She also cites a secret weapon of sorts: a "limited service" provision in the FDD that she’ll pull out if personal phone calls don’t work to get someone in compliance.

This list includes franchises in the Franchise Times Top 200+ database with 500 units or more, ordered by amount of litigation per 1,000 units, so brands with units closer to 500 than 1,000 will move higher up the list than they would without that adjustment. We include the number of units for each listing to provide that context.

The number of units for each franchise was sourced from our Top 200+ list, our annual ranking of franchises based on systemwide sales, using 2018 numbers, and the number of cases per franchise was calculated by analyzing the Item 3 of each company’s franchise disclosure document.

For litigation affecting a franchise’s parent company or a partner company as opposed to the brand itself, we evaluated whether the litigation had an impact on the specific brand in question.

If the parent company experienced a data breach that affected all its subsidiaries, for instance, that would be counted. If a sister company faced a lawsuit that was unrelated to the brand and was only reported in Item 3 because the two companies share a parent, that would not be counted.

Note: We were unable to include three Choice Hotels franchises (Comfort Inn & Suites, Econo Lodge and Quality Inn & Suites) on our list because their FDDs didn’t specify whether certain lawsuits corresponded to sister hotel units that were immaterial to the brand in question.