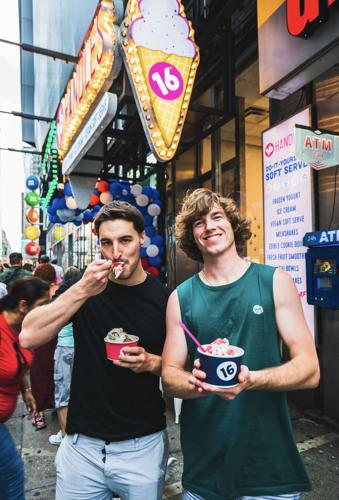 16 Handles' largest franchisee, Neil Hershman, has teamed up with comedic YouTuber Danny Duncan to buy the self-serve frozen-yogurt chain from its founders. Hershman, who also owns three Dippin' Dots franchises in New York City along with seven 16 Handles shops, plans to put his operating chops to work at the 30+-unit brand.

"I was the majority franchisee, and I obviously love the franchise, I love the concept, I love the product," Hershman said. "I just thought there was more opportunity for it, and I thought it needed more leadership and someone who was experienced in the stores. The former owners weren't so engaged with the store concept any more."

16 Handles opened its first store in Manhattan's East Village in 2008, the first self-serve frozen yogurt shop in New York City, with "endless" toppings and 16 separate soft-serve flavors. Founder Solomon Choi came to New York City in his 20s and started 16 Handles "as part of my lifelong dream and passion to create my own brand and build it into something great. Today, I see this same desire and fire in Neil as a successful franchisee who will now take over the direction," Choi said in a press release.

Hershman said the brand will benefit from "having somebody who's in the stores and knows what it's like to operate as a franchisee and own stores, also be making some of the decisions for the franchisees that can improve operating margins."

Duncan is a YouTuber known for posting prank videos and skateboarding, often while wearing "Virginity Rocks" t-shirts from the clothing line he acquired. He has more than 6 million subscribers, and between 2020 and 2021, during COVID lockdowns, did over $50 million in merchandising, Hershman said.

"He sold out three world tours to over 95 percent occupancy at a bunch of different venues, with the market that everybody's trying to get to know, Gen Z." Hershman, 27, and Duncan, 30, are millennials themselves.

Duncan, who is now chief creative officer for 16 Handles, came to one of Hershman's shops "just on coincidence. He had 16 Handles, and he was telling my employees, 'this was my favorite froyo experience ever.' It turned into the conversation of, he wanted to be part of it. He loves the product," said Hershman, who is CEO, declining to state the cost of the purchase or its capital structure.

"He knows the online industry, he knows how to reach audiences that no other brands can, and he brings so much knowledge into the business in addition to obviously a massive network that he's built."

Hershman also owns three Dippin' Dots/Doc Popcorn shops in New York City, the parent company of which changed hands in May 2022 when J&J Snack Foods Corp. acquired it for $222 million. The sellers were Mark Fischer and his son, Scott, who bought the brand out of bankruptcy for $12.7 million 10 years earlier.

Hershman said the effect of the change on the Dippin' Dots/Doc Popcorn brand is "neutral," because "the franchising wing of Dippin' Dots has really strong leadership and it's being run very well." J&J Snack Foods kept that leadership team intact, he said.

Last June, Hershman told Franchise Times one of his key tenets in running his business is "stay close to your stores." His mode of transportation was an electric scooter, which he used to visit his five 16 Handles shops and one Dippin' Dots/Doc Popcorn shop (at the time.) "It became my signature management style. I can get to the stores in 10 minutes. It's been a big success because emergencies happen." Read about Neil Hershman's three entrepreneurial principles here.

Asked if he'd have to abandon that idea now, he laughed. "Yes, that is true," the empire is too big to visit every store on the scooter. "My primary role is where I'm focused. Not to sound crazy, but I'm kind of focused 24 hours a day" on his new role as franchisor.