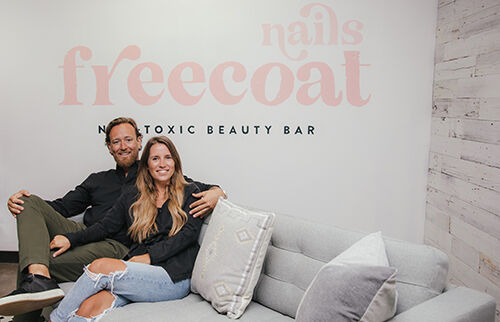 Freecoat Nails, a non-toxic nail salon, is the first acquisition for Landon and Kat Eckles, the co-founders of Clean Juice. They expect it won't be their last as they look for more brands to add in the health and wellness space.

"I love doing that work," Landon says about acquisitions. "I like to look at what something could be, but also what it's worth now." The key to doing a good deal is being willing to walk away, he says, something he has no problem with. Kat shoots back: "He's called Lowball Landon."

The pair weren't the first in the juice bar business, although they were first to have a U.S.D.A.-certified organic juice franchise, and they're not the first in non-toxic nails.

At least two other nail care franchises, Prose Nails and Frenchies Modern Nail Care, also tout non-toxic nail care and are ahead of Freecoat, which was called Mylkbar Eco Nails + Beauty and has two stores. Katie Shields is the founder of Mylkbar.

But Landon and Kat say they like to make a category better rather than start it. "It's a $14-billion industry that's been done very, very poorly," said Landon about nail salons.

"You walk in and there's a stench" from the chemicals in nail polish and related products, yet customers "go in on a biweekly basis. We feel we can really improve it." Freecoat salonshave a medical-grade air exchange system, Landon says, for instance.

Added Kat Eckles, chief branding officer, "I think we can build a little better from the get-go," both in systems and franchisee selection. When they began franchising Clean Juice in 2016, "we spent the first two years of franchising fixing everything," Kat said, and now they'll apply those lessons.

"Clean Juice took six months to get an FDD," or franchise disclosure document, said Landon. "With this, it took 10 days." Other acquisition targets may include an infrared sauna concept and a fitness brand.

Fit20 USA welcomed its first investment partner—Raymond Kusch, the founder and CEO of consulting and investment firm Kinvesting—as its newest shareholder and member of the board of directors. Founded in the Netherlands, Fit20 has studios in Virginia, Florida and Michigan and features a 20-minute slow-motion workout once a week with a certified personal trainer. Kusch entered the Army after high school and was injured from an IED blast in 2012, causing him to lose his left leg. An advocate for veterans and those living with disabilities, Kusch tried the Fit20 workout and found it challenging and intense, yet accessible to all ages and abilities. "He felt strongly he could be an advocate for Fit20 methodology, and as we visited with him about his interest, he wanted to not only support our franchise growth but also invest in the company," said Ben Litalien, Fit20 chief development officer. "The shareholders were willing to provide him the opportunity to become an owner in the master franchise, and we couldn’t be happier to have such a high-quality person who has overcome such significant challenges in service of our country." Litalien plans to work with Kusch on expanding the brand's presence and reach in the military sector with veterans and service-disabled veterans. Kusch has founded and owned multiple businesses, including UMG Events and American Professional Gutters. Litalien, founder and principal of consulting firm Franchise Well, worked with ExxonMobil Fuels Marketing Co. as the U.S. franchise development manager and helped scale to 1,000 franchise units using a regional developer model.

Private equity firm Levine Leichtman partnered with management to acquire Atlanta-based Tropical Smoothie Café, the terms of which were not disclosed. Based in Los Angeles, Levine previously invested in restaurant concepts such as Bertucci’s, Cici’s and Wetzel’s Pretzels. Tropical Smoothie Café, which was founded in Florida in 1997 and sold to BIP Opportunities Fund in 2012, has more than 870 locations in 44 states, and averaged 23 percent sales growth systemwide over the past five years. Existing management will continue to run Tropical Smoothie, including CEO Charles Watson.

IPH Enterprises, a new franchisee group led by Charan Dhaliwal, acquired 30 Pizza Hut restaurants in Kentucky, Indiana, Iowa and Illinois from 2JR Pizza Enterprises. Jeff Reetz, leader of 2JR Pizza Enterprises, began working for Pizza Hut corporate in 1985 and acquired the Louisville market in 2000 as part of a refranchising initiative. He later purchased the Illinois and Iowa markets in 2008 and hired his son Brian, who spent the last decade working in business operations. Unbridled Capital provided sell-side advisory services to 2JR Pizza Enterprises. The transaction took longer than normal with COVID in the mix, said Unbridled Capital managing director Rick Ormsby. As a condition of closing, the franchise M&A advising company will donate to the Pizza Hut museum at Wichita State University.

Brightway Insurance multi-unit franchisee Ken Toney acquired Brightway Insurance, The Kennedy Family Agency, in South Daytona, Florida. This makes Toney the brand’s first four-unit owner, with locations in Florida, Georgia and Texas. Angie Kennedy will become the new principal agent at the store, who has worked with Toney for more than 20 years. Toney opened his first Brightway store in central Florida in 2009, then opened another store in Georgia in 2016. Earlier this year he became the owner of his first location in Texas. The national property and casualty insurance distribution company began in 2008 and has more than 200 offices across 22 states.

FAT Brands is set to acquire Johnny Rockets for $25 million, which sounds like a great deal for FAT Brands, but President and CEO Andy Wiederhorn said it was no fire sale on behalf of owner Sun Capital. He said the deal had been discussed for some time prior to COVID. Johnny Rockets will be a part of the overall platform of FAT Brands that includes Fatburger, Elevation Burger, Buffalo’s Cafe, Buffalo’s Express, Hurricane Grill & Wings, Yalla Mediterranean and Ponderosa and Bonanza Steakhouses. According to Wiederhorn, adding Johnny Rockets would push his company’s overall revenue to north of $700 million.

Fifteen corporate-owned Steak 'n Shake restaurants were set to be sold in early September via public auction, a process that can benefit sellers that fail to find buyers for troubled stores in the traditional way, said Harold Bordwin of Keen-Summit Capital Partners, the firm that handled the transactions. "They were not sold, and the company was kind of tired of the traditional brokerage approach. They decided to work with us on an accelerated auction process," he said. A minimum bid of $367,000 per location was set, but Bordwin did not disclose the final prices or identify the buyers.