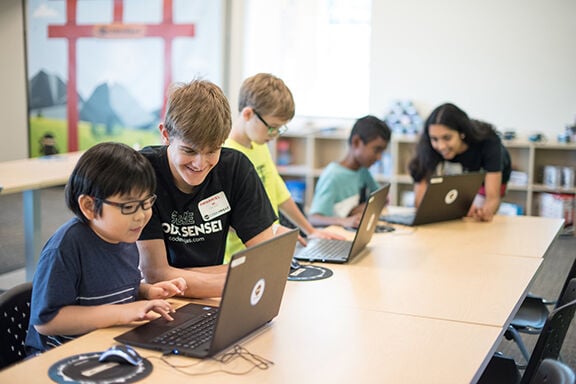 Eagle was introduced to Code Ninjas last December, and liked the computer-coding tutoring industry. "There was a lot of macro tail winds around software learning; parents interested in spending money on kids; and kids being interested in software gaming. It was right at that intersection," said Croft, a former investor in an IHOP franchisee who said his firm takes a franchisee-first approach because of that background.

The firm's first job, after installing a new CEO, will be to zero in on average unit volumes. "Our No. 1 goal is to increase that AUV. Its' in the $300,000 range. We think it could be 40 to 50 percent higher than that and we think that will increase profitability," he said.

Eagle's method is to do an "analytical deep dive around the top franchisees," to learn what they're doing that is different from the average or below, and take those lessons throughout the system.

With Code Ninjas, "we believe the No. 1 factor is around, who is the franchisee or their center director, and is that person driving sales through digital marketing and active recruitment? We think that's going to be the biggest opportunity," he said.

The franchise recently launched Code Ninjas Studio, which is for current franchisee who can open units in alternative sites such as an office building or church daycare. "That could be a pretty interesting opportunity as well," Croft said. "It will be a tack-on, hub-and-spoke system."

Eagle is taking a stairstep approach to investing in Code Ninjas. Poised to buy a majority stake earlier this year, the private equity firm switched to a minority investment.

"When COVID hit, we said a full majority investment would be tough for everyone to agree on valuation," said Croft. The ultimate deal: "We'd buy a minority piece, we'd take a board seat, but if things go well, we'd have a call option to make a majority investment" in the next 18 months or so.

One attraction to the deal, Croft said, was founder David Graham's willingness to both seek assistance and also bring in a new CEO to take the 240-unit franchise to a new level.

"He really knew he needed help in areas we could help," including site selection and franchisee selection, Croft said.

Under the leadership of CEO Trey Owen, United PF was then a collection of 59 Planet Fitness franchisee locations in nine states. Today, United PF has 160 locations in 14 states.

"Both of those we felt were companies that we helped build for the long term," Croft said. "My key focus and Eagle's key focus is to try to find the next ones. Ninjas has potential," he said.

Craftworks gets buyer as the crowd funds Pure Green

Many sources of capital flowed into this month's franchise deals, from SPB Hospitality's rescue of Craftworks to "money from the people" into Pure Green.

Neighborly acquired HouseMaster, making the professional home inspection franchise the 25th brand under the large home service umbrella. "We were in dialogue for several months. Fortunately, we were able to complete a site management visit prior to it becoming clear that COVID-19 was becoming a serious issue in the U.S.," said Mike Bidwell, president and CEO of Neighborly. "We certainly would have closed sooner had we all not been navigating this pandemic." Brad Stevenson, chief development officer at Neighborly, anticipates selling more than 400 new franchise units this year because of the rise in unemployment. "What we saw was potential candidates looking for their own business, and other organizations shut down some of their development side," Stevenson said. "For us, it was a time to double down in development and help people find what they were going to go do next."HouseMaster's CEO Kathleen Kuhn and her staff will join the Neighborly umbrella, Bidwell said.

Pure Green, a New York City-based juice and smoothie chain, launched a crowdfunding campaign through Republic.co and raised $1.07 million from 5,104 micro-investors. "What interested us about equity crowdfunding was the effect of having thousands of investors," said Ross Franklin, Pure Green founder and CEO. "We were approached by lots of private investors and private equity firms that wanted to give us way more money than what we needed and wanted too much control. We really liked the idea of raising money from the people." The brand has five corporate-owned retail locations in New York City, another in Orlando, Florida that recently opened, a store in Chicago that is slated to open August 1 and another location in Miami, Florida signing a lease. The brand plans to use the funds raised through Republic.co to support staff and operations at current locations as well as aid in franchise expansion.

Franchise group Gold’s Gym Tennessee—led by partners Robert Dennis, John Davis and Andrew Davis—acquired Jackson Sport and Fitness, a 30,000-square-foot gym. As of July 4, Gold’s Gym Jackson closed its gym at 106 Carriage House Drive and is transferring those gym members to their newlyacquired space at 1068 Vann Drive in Jackson, Tennessee. Gold’s Gym Tennessee has 14 other facilities open across the state.

SPB Hospitality, a Nashville-based hospitality group and an affiliate of Fortress Investment Group, bought former Craftworks Holdings brands out of bankruptcy for $93 million in waived debt and assumed liabilities. Former Craftworks restaurants, which filed for Chapter 11 bankruptcy in early March and cleared the sale in May, include Logan’s Roadhouse, Old Chicago Pizza & Taproom and other concepts. SPB Hospitality will take control of Craftworks’ 261 company-owned locations, all of which closed during the pandemic, and reportedly plans to reopen at least 150 of them.

Crescent Acquisition Corp, a publiclytraded special purpose acquisition company, acquired F45 Training Holdings, a fitness franchisor with more than 1,900 franchises sold in 50 countries. If completed, the merger will create a publiclytraded brand with an expected to have an enterprise value of $845 million. The combined company will retain the F45 Training Holdings name, will trade on the Nasdaq exchange and will continue to be led by CEO Adam Gilchrist. F45 has more than 1,200 studios open in 40 countries, including the U.S., Australia, Canada and the U.K.

Restore Hyper Wellness + Cryotherapy attracted an $8 million investment from Level 5 Capital as it seeks to accelerate what CEO Jim Donnelly called "the democratization of hyper wellness." The investment will help Austin-based Restore quicken the pace of its franchise growth, open more corporate locations, bolster research and development, and integrate new technology, said Donnelly, who co-founded Restore with Steve Welch in 2015. Restore has 50 locations, 10 of them company-owned, in 24 states.