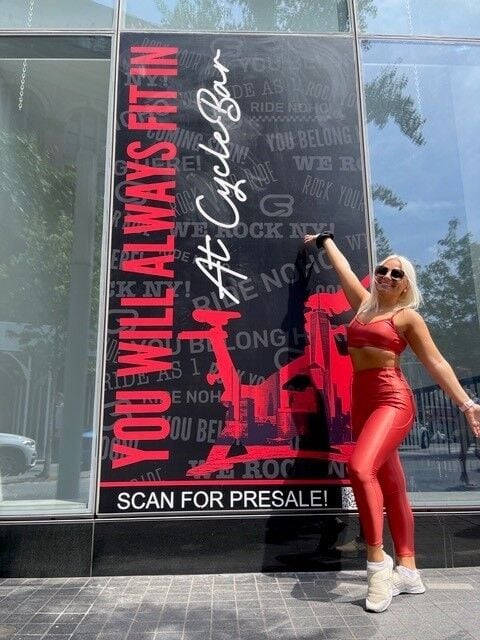 A staffer shows off the new CycleBar location in New York City, which will debut June 29.

New York City-based franchisee PB Metro is bringing CycleBar, the indoor cycling franchise, to the Big Apple for the first time, assuming the leases of six former Flywheel Sports studios that closed last year and rebranding them. The first opens next week.

Backed by Palladin Consumer Retail Partners and formed in 2019, PB Metro also has development rights for 23 more CycleBar studios in the New York metro over the next five years. It will also open a studio in Philadelphia. The group owns 16 open Pure Barre studios in the market, with an additional 12 licenses to be developed over the next three years.

“We’re very excited, especially after such a year of loss in this community,” said Kaitlin Vandura, CEO of PB Metro, which is now the largest franchisee of CycleBar and Pure Barre in the Xponential Fitness system. How does that feel?

PB Metro was formed in 2019, with Boston-based Palladin providing the capital to consolidate Pure Barre franchisees in NYC. “I owned at one point four locations of Pure Barre, and sold three of those to Palladin with a group of other New York City owners,” Vandura said, counting up the number of former owners. “So we merged 14 studios owned by one, two, three, four, five different ownership groups. It was complicated and very painful.”

Flywheel filed for Chapter 7 bankruptcy last September and closed all 42 of its indoor cycling studios, at the time contacting Xponential to see if the franchisor would purchase some or all, Vandura said. “Xponential actually looked at the deal, and they were like no, we have these great partners, they have the presence in New York, so we were the ones looking through the information, all the numbers.”

Flywheel had locations in Washington state; Washington, D.C.; Miami’s South Beach and more. “They did have a pretty vast presence. We ended up deciding that the ones in the tri-state area” made the most sense.

Before committing, PB Metro made sure they could re-work the leases with landlords. “We were going to position us to be way more cash-flow positive, just taking advantage of the retail market and what landlords were willing to do at the time,” she said.

“We started looking in April or May of 2020, so it was a great time to be talking to landlords about getting a good deal.”

What kind of deals? “It’s a real variety of things, based on the landlord. Pretty much all of them had TI,” or tenant improvement funds, “which was not normal pre-COVID. Generally you get very little if any TI. And then a period of free rent. And then one thing we negotiated is rent based on capacity” rules from the state and city. “So if we’re at 50 percent capacity, we would pay 50 percent rent,” she said.

The first CycleBar studio is opening June 29; New York City fully opened up last week. “I think we got lucky in our timing,” she said, adding if she had been on her own last year rather than part of PB Metro and backed by Palladin, “I think I would have called it and said it’s been a great run. I don’t think I would have wanted to navigate the COVID crisis alone.”

She’s grateful Palladin was willing to back PB Metro in 2019, even with multiple owners. “I think Palladin was the right partner for us because that didn’t faze them,” she said. “It was several cooks in the kitchen, but we got it done. It just took a lot of teamwork on the different owners’ part. I think everyone had the same basic priorities and clearly the same mission: let’s get this done because it’s the right thing for the client and the right thing for the market.”