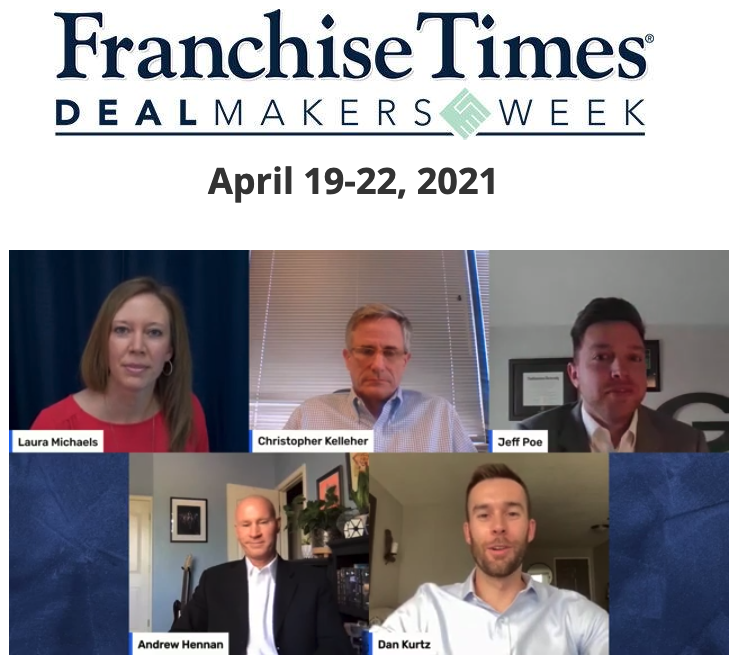 It’s a great time to be a borrower “not just because of the competition but just the general rate environment,” said Chris Kelleher of Auspex Capital today on a panel during day one of Franchise Times Dealmakers Week. “It’s a great time for franchisees to lock in long-term capital structures.”

But he urged a bit of caution, too, for everyone in the franchise M&A game. “These are heady times and you’ve got to make a commitment that these cash flows in your mind are real and sustainable,” he said. “And if you’re paying the heavy multiples, you have to have the conviction that these cash flows are there and you haven’t deluded yourself into thinking that this hockey stick is going to last forever.”

Jeff Poe with Fifth Third Bank said 2022 is the year “we’ll see some of the dust settling. And when demand comes back, what does that mean for QSR and delivery? How much of that gets absorbed by indoor dining, and how much gets absorbed by virtual kitchens and ghost concepts?” he said. “A lot of our franchisees are feeling they don’t want to be caught unprepared for uncertainty.”

Dan Kurtz, also with Fifth Third Bank, seconded Poe’s thought and added another topic vexing operators today. “The labor market is heating up. It’s hard to attract and retain workers. Even though there’s still a number of restaurants jobs that have been lost, some have been replaced in other sectors,” like e-commerce and the grocery sector. Amazon, he noted, added an astounding 430,000-plus employees during 10 months last year.

Andrew Hennan, COO of Taco Bell franchisee J.A. Sutherland, listed having strong advisers as a must for restaurant operators. He hired Auspex Capital after joining J.A. Sutherland in March 2019 and finding it was on the ropes. Auspex led a recapitalization effort, bringing in Fifth Third Bank as lender, and now Hennan says the operation is back on the growth track.

“I’ve always believed that you’re either growing or dying. So I think it’s important for us that you look at small M&A opportunities, look at incremental opportunities. We have opportunities to grow between restaurant to restaurant,” he said, about their operations in northern California and southern Oregon.

But first, focus on the basics, he said—in each and every restaurant, doing better than last year, last week and yesterday. “For me it’s being very humble and disciplined. It’s been really buckling down and focusing on that, and where is the next opportunity for us.”

Presented by Franchise Times and the Restaurant Finance Monitor, Dealmakers Week continues Tuesday with a discussion on Buying Into a Turbulent Market plus more M&A topics. Register or access panel recordings here.