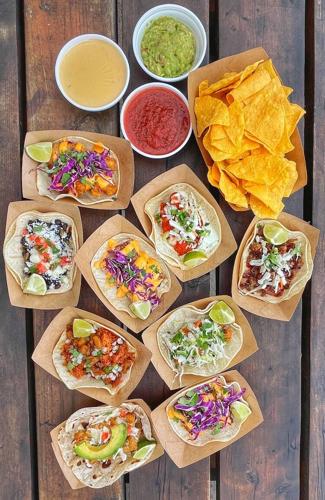 "They've had the brain trust of Inspire, and they've had so much done as a brand, not just from a marketing perspective. There's just so much more discipline than you'd normally find in a 35-unit brand," says Anand Gala, founder of Gala Capital Partners and Rusty Taco's new owner.

Gala Capital Partners acquired Rusty Taco from Inspire Brands in a deal including new equity investments from co-founder Denise Fenton and other executives and an expected better "strategic fit" for the 35-unit taco chain.

He notes Fenton, the widow of Rusty Fenton and the brand's namesake, is "not only part of the leadership team, she is also a partner. She co-invested with us." So she thinks there's another bite of the apple for Rusty Tacos owners? "She thinks that there's going to be another bushel of apples," Gala said.

"I understood how it was not a strategic fit with Inspire. They're very focused on large-scale enterprise brands," said Gala, who noted Rusty Taco was initially bought by Buffalo Wild Wings, in 2014, and within 12 months BWW attracted an activist investor who pushed for a management shakeup and sale.

"So years go by, the intent was to grow it, and in fact the management team of BDubs is completely focused on other things as by the way they should have been. It leads to an odd set of circumstances for Rusty," Gala said. In 2018 what is now called Inspire Brands bought Buffalo Wild Wings and Rusty Taco; it also has Arby's, Sonic, Dunkin', Baskin-Robbins, Jimmy John's and Mr. Donuts under the umbrella.

Rusty Taco has one company store and the remainder are franchised, "but we're committed to developing more corporate stores" as well as franchised. "There are some remarkable franchisees in the system. Many of them are really thriving," Gala said. Taco brands are popular M&A targets, with Dine Brands buying Fuzzy's Taco Shop late last year.

A former franchisee himself who purchased Mooyah Burgers & Fries in 2017 and Dunn Brothers Coffee in 2022, Gala said "our sweet spot is a little bigger, probably 50- to 150-unit brands, but usually those opportunities are not as well developed as Rusty. They've had the brain trust of Inspire, and they've had so much done as a brand, not just from a marketing perspective. There's just so much more discipline than you'd normally find in a 35-unit brand."

Brendan Mauri is CEO of Rusty Taco and one of the management team's new investors. He was promoted to president of the brand from senior marketing director in February 2020. "I was happy that Inspire really treated the process in the right way," he said about finding a new investor for Rusty Taco. "Their focus was on what's right for the brand and our franchisees and our team. The culture at Gala aligns well."

February 2020 was "certainly an interesting time for me to come in and take over. I was tasked with a lot right away, as far as COVID. Being part of Inspire was very valuable, just the resources they had to navigate that," he said. "Inspire did a lot of great things. Inspire brought a lot to us in terms of just building foundations, pushing further on digital and that side of the business," along with "optimizing how we approach site selection and design prototypes and those types of things. That said, I think this was the right time" for new ownership.

"We have a real big runway because we've put a lot of great processes in place. Gala's coming in at an interesting time where they can bring focus, but a lot of the processes are there," Mauri said.