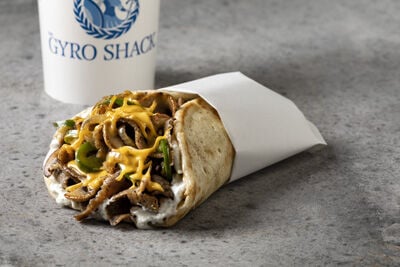 Two investors who were also The Gyro Shack's largest franchisees, with four locations in Boise, Idaho, have purchased the brand and plan to restart a franchising program that foundered after a promising push beginning in 2015.

Then, Doug Miller and Seth Brink purchased The Gyro Shack from the founder, Gus Zaharioudakis, and started building the systems needed to franchise. "We had never sold franchises" before, Brink said. "We sold 40 units in four different markets, in Washington and Northern Idaho, and all of them have since closed," in the fall of 2019.

"There were a number of factors, and I will own all of these, because we made the decision to franchise to all these people. You don't know what you don't know, until you do it," he said. "We franchised to people who had been in other brands for some time. They just forgot what it was like to open a new brand in a new market."

The Gyro Shack now has eight corporate stores and one franchised, owned by Miller who no longer has a stake in the company nor his executive post. The deal closed on February 29, "which is rather serendipitous because COVID hit two weeks later," said Brink, who is now president.

Mark Urness and Matt Jeffries are the two investors. Urness, the majority shareholder,

built a cell phone brand with 123 locations called MyBullfrog.com in Idaho, Nevada and Utah until 2015, when he merged with Go Wireless with 700 locations in 33 states, Brink said.

Jeffries, a minority shareholder, acts as Urness's CFO, managing his investments including Gyro Shack. "He's bringing a level of financial acumen that we've never had," Brink said, noting the two men were Gyro Shack franchisees.  "They wanted to diversify, so why not diversify with a brand that you love the food and you know the people.

"Mark and Matt, they are primed and ready to grow, and they're much better funded. And it takes that," he said.

Brink's job will be "really, just re-proving the brand," and focusing on Idaho, Utah, Colorado, New Mexico, Montana and Arizona at first. "We're looking at the Phoenix market corporately, to get a store or two open. Phoenix is really interesting, because of the diverse demographics from Idaho."

Asked if the track record of the brand will hurt his efforts, he said not necessarily. "You can take it either way. You can say it's going to hurt us, but I can tell you, we learned a lot," he said. "I'm not worried about it. I think we have a brand that we can sell."

As 7-Eleven Makes Biggest Deal, MOD and RSG Buy Too

Bankruptcy court proved fruitful buying territory for Aurify Brands, MOD Pizza and RSG Group, a few of the players that acquired assets out of Chapter 11. Meanwhile, 7-Eleven topped the deal charts this month with its offer for Speedway.

MOD Pizza acquired 13 existing locations in North Carolina after the stores’ previous owner and operator, SD Holdings, filed for bankruptcy in February. The multi-brand franchisee had ventured into Sonic Drive-Ins, Fuzzy’s Taco Shops and Oxi Fresh in addition to MOD Pizza. "Our partner there, Yaron Goldman and his team, are wonderful people and have done a great job building MOD in the North Carolina market and brought MOD to life out there with a great culture," said Scott Svenson, co-founder and CEO of MOD. "Unfortunately, he bought another business and leveraged himself and had an unfortunate circumstance where he bought real estate, sold it, then through that transaction had an unexpected big tax bill. He got sideways in his balance sheet which pushed him into bankruptcy, which was a tragedy for him and his team." As of July 27, MOD assumed full control of the 13 locations spread between Charlotte, Wake Forest, Raleigh, Fayetteville and Asheville and is keeping more than 300 employees hired, plus gave them a raise, Svenson said. "We didn’t miss a beat because they’d been executing at a great standard before. On a day-to-day basis, very little will change other than technically, them becoming company employees," Svenson said. "This is the first time anything like this has happened. We have a very small, high-caliber group of franchisees, so this is unusual." MOD has 406 company-owned locations with this acquisition and 82 franchise locations. "It’s pretty straightforward actually," Svenson said. "It’s a sad story for Yaron but a positive outcome for the team, and we couldn’t be more excited to be working in North Carolina."

7-Eleven offered to acquire about 3,900 Speedway stores in 35 states from Marathon Petroleum for $21 billion. This is the largest acquisition for the large convenience-retail chain, expanding 7-Eleven’s total number of stores to approximately 14,000 in the U.S. and Canada. 7-Eleven will form an integration steering committee with leadership representatives from both its company and Speedway and plans to retain 40,000 Speedway employees. The combined company will also utilize more eco-friendly packaging, sustainable food supplies, reduce their plastic usage and set 2027 targets to reduce CO2 emissions.

Conifer Industries sold their 16 KFC restaurants in Maine and New Hampshire to KBP Foods, led by Mike Kulp and Barry Dubin. Conifer Industries was founded in 1972 by Fred Thurston, who began cobranding many of their KFC restaurants with Taco Bells in 1996. The Thurston family had never transacted in the M&A world prior to this, and Unbridled Capital provided advisory services to them. As a condition of this closing, Unbridled Capital made a donation to the KFC Foundation.

Rainer Schaller’s Berlin-based RSG Group placed the winning big for Gold’s Gym. If approved by the U.S. bankruptcy court, RSG would pay $100 million for Gold’s 61 company-owned gyms and more than 600 franchisee-owned units. TRT Holdings, a Texas-based private company that also owns Omni Hotels, is the current owner, run by Robert Rowling, whose family's oil and gas company was sold to Texaco in the late 1980s. TRT bought Gold's for $158 million in 2004. In July 2018, TRT said it was exploring a possible sale of the company, but then reversed its decision in February 2019, saying it would instead reinvest in the brand and bringing back its chief information officer, Adam Zeitsiff, as CEO.

Aurify Brands was on the favorable side of the so-called bankruptcy cramdown when buying 50 Le Pain Quotidien restaurants in the U.S. from the Belgium-based parent company in June. "The beauty of the bankruptcy process is, it enabled us to shed the underperforming stores and focus on the good stores that we wanted, and restructure the leases in a more favorable way," said John Rigos, co-CEO of the New York City-based Aurify. The other 48 stores will remain permanently closed, with their landlords no doubt less enthused.

The newly formed Radiance Holdings led by Christina Russell and including Sola Salon Studios acquired Woodhouse Day Spa, a Victoria, Texas-based franchise with 65 locations in 21 states. Sola, for its part, is owned by a consortium of investment groups—MPK Equity Partners, AHR Growth Partners and PNC Riverarch Capital—that acquired a majority stake in the Denver-based brand in 2018. With Russell’s transition to CEO of Radiance, Sola’s president and COO, Myrle McNeal, will continue to lead day-to-day operations of that brand. Ben Jones and Nathan Jensen were appointed Radiance’s chief development officer and chief counsel and chief financial officer, respectively, roles they previously held with Sola.