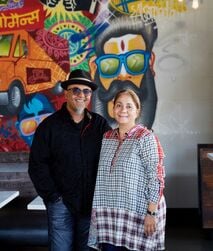 "I dream of this, and I preach this passion to my team," said Akash Kapoor, co-founder of Curry Up Now. "We have to be the biggest and baddest Indian food brand, and the way it works out is you always need cash."

The fast-casual concept moved one step closer to the goal, with a seed-stage investment in January from Liquid 2 Ventures, whose general partner is Hall of Fame quarterback Joe Montana, plus Ph.D. physicist and founder of Cloudant Mike Miller and founder of Talkbin Michael Ma.

That’s an unusual cadre of San Francisco Bay Area tech investors backing a restaurant company, Kapoor acknowledged, but said Curry Up Now’s technology and position in the restaurant industry were two of the draws, plus its location in the midst of tech power players.

"Being where we are, it’s very easy to be tech forward and not cool to not be adaptive of tech," he said. "So a lot of the partners we work with on technology are in the Bay Area," with Curry Up Now being an early client. "DoorDash started out of Stanford, and our DoorDash customer code is 003 or 004."

Curry Up Now started as a food truck in 2009, "and we wanted to make sure that we did Indian food slightly different," he said. "Burritos are our No. 1 seller," along with Sexy Fries, Naughty Nahn, Holy Moly Fried Ravioli and Dynamite Tangra Wings.

He’s used technology for "anything that makes us do our job with as little work as you can," he said. "We had an app on the food truck back in 2010. We were the first truck who had an app that was taking multiple orders…people used to tweet us their orders" in the early days.

Liquid 2 Ventures partners said via email, "We've been impressed by the growth of the company and how they've leveraged technology to scale up the business. In some ways it reminded us of Travis Kalanick's (Uber founder) new company CloudKitchens. We've also been incredibly impressed by the quality of the management team," they said.

"Increasingly we've been looking at companies that are less traditional tech and seeing if they scale the same way technology has. I think VC investors ultimately invest in innovation and sometimes that looks different than a software company. Even Uber looked like a taxi company at first, or AirBnB like a hotel company. I think the VCs backing Sweetgreen and the Melt also saw a similar opportunity in food," they said.

Liquid 2 Ventures is not disclosing its investment amount and are not taking a board seat. "We are advising the company though with some of the best practices we’ve seen in our other portfolio companies," they said. And the ultimate goal: "We think Curry Up Now can be a publicly traded company some day!"

What will Kapoor do with the investment? "Buy some cars," he said with a laugh. "No, growth, growth, growth. Franchising is a very cash-intensive" business. "Franchising, it just needs a lot of cash and the returns are not there right away. The money keeps growing but you still have to spend the money. It’s corporate stores, upgrading structures."

Cost of investment for a Curry Up Now franchise ranges from $400,000 to $1.7- to $1.8 million, the latter for two-story buildings with a bar, ranging from 1,200 to 3,300 square feet. The minimum deal size is for five units. Curry Up Now has more than 50 franchise and corporate locations in varying stages of development across the U.S., the company said.

A failed attempt to get a new buyer last fall, plus sales declines of 3.4 percent last year, led Bar Louie into bankruptcy court and seeking new ownership. The gastropub chain expects a minimum bid of $82.5 million bid from secured lenders and a hope that other, higher offers will follow. Meanwhile, Greek from Greece Bakery Cafe lends its easier-to-pronounce name to Fournos Theofilos.

Fournos Theofilos will merge under the easier-to-pronounce Greek from Greece (GFG) Bakery-Café brand label. The former specializes in freshly prepared Greek delicacies, while the latter serves up traditional Greek fare and café beverages sourced directly from Greece. The initial merger conversations started in July 2019 and signatures were signed December 21. GFG will rebrand Fournos Theofilos’ two Manhattan locations to GFG Bakery-Cafés, thereby doubling their number of locations in New York City. "The merger was a monumental event for our brand that united two brands of the same origin," said Georgios Drosos, Greece native and founder/ CEO of GFG Bakery-Café. "We believe it will be a win-win situation." A new expansion plan is also on the way, Drosos added.

7-Eleven Inc. will acquire more than 100 7-Eleven stores in the greater Oklahoma City metro area that have been independently operated for 67 years. The transaction is anticipated to close in 60 to 90 days. Seven & i Holdings Co., Ltd., the parent company of 7-Eleven, operates almost 70,000 stores in 17 countries globally.

Graphics and visual communications franchisor FastSigns International acquired Sign Me Up Signs & Advertising. Seven total Sign Me Up locations will be converted to FastSigns centers throughout Long Island and New Jersey in February, and the brand is projected to open more than 30 locations this year in the United States.

Bar Louie filed for Chapter 11 bankruptcy protection and put itself up for sale, seeking a so-called stalking horse bid (an initial bid on the assets of a bankrupt company) from its secured lenders, with a minimum bid of $82.5 million. Owned by Sun Capital, Bar Louie hired an investment banker last fall but failed to get a deal despite three letters of intent to buy the gastropub chain. It closed more than 38 corporate-owned locations (out of 134 total units) at the end of January because of "accelerating" sales declines. Revenue fell 3.7 percent to $252 million last year. "The sale through Chapter 11 will help us to focus on our profitable core locations and expand in areas that have a proven track record of success," said CEO Tom Frick in a statement.

Mid-Atlantic brokerage TriStar Realty was acquired by HomeSmart, a residential real estate company. Its nationwide network has nearly 18,000 agents with 190 office locations. "In less than two decades, we’ve scaled our model to 35 states," said Matt Widdows, HomeSmart’s founder and CEO in a statement. "Expect a similar trajectory in 2020."