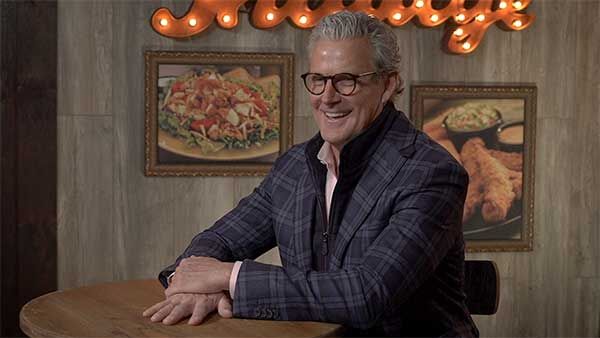 "We're breaking up the band after all these years," said Zach McLeroy, CEO of Zaxby's, about the buyout of his business partner and best friend Tony Townley by the Goldman Sachs Merchant Banking Division.

The pair opened their first chicken fingers restaurant 30 years ago, funded with credit cards and McLeroy's sale of his drum set for $8,000, ending McLeroy's ambition to become a professional drummer. Operating primarily in the Southeast, Zaxby's today has more than 900 restaurants in 17 states.

The Goldman Sachs investment will fuel expansion. "We want to take the brand nationwide. That's a goal we have, and Goldman wants to help us with that," McLeroy said, adding international expansion may follow.

"With the engine of Goldman behind us, the attention that brings to us, it validates we're a great brand, we're doing great things," he added. "It's been a mom and pop brand, run by my partner and I," and the investment "really got people's attention."

Townley and McLeroy got plenty of attention themselves when they went to the private equity market for the first time earlier this year, at a brand nearing 1,000 stores. "There are not a lot of founder-led organizations" of that size "that are going out to try to do a deal, so there will be a lot of demand," their investment banker told them, and that proved true.

"We decided why not, let's take a look, and see what the demand will be. We started off with about 30 banks, and then narrowed to 14, and then six or eight really negotiating hot and heavy for Zaxby's." Goldman Sachs rose above, he said, perhaps surprising given the seeming mismatch between slick East Coast bankers and the Athens, Georgia-based Zaxby's founders.

"It was a little strange" at first, talking to private equity firms, he said. "That's how I viewed Goldman and other private equity groups. You come in, you clear house, you hire new people, you go public. That's a fear of mine, but as we talked more," he became comfortable with his new investors. "This is not a short-term deal for them, they're in it for the long term. That's where I think we found our alignment."

Nonetheless, "It's a big change," he said, to operate without Townley. "I've been together with my partner for 30 years. People tend to change. This was a great opportunity for him to step aside. I believe in the future of the business and I wanted to stay in."

The NPC International deal continued in the spotlight after Flynn Restaurant Group offered $816 million for the entire company in early November. Recent filings showed a great deal of activity between creditors, NPC and the Flynn legal team, and it seems at this point that the deal is Flynn's to lose. Hearings in later December and a final confirmation hearing slated for January 15 will give the final word on the massive NPC deal. Other dealmakers are making moves as well. On November 19, Wendy's made a bid for NPC's nearly 400 Wendy's locations and said a consortium of franchisees would operate them. Wendy's objected to Flynn's bid, saying the Arby's and Panera Bread stores that Flynn owns are competitors to Wendy's, and calling the minimum $10.5 million breakup fee in the Flynn bid too high. CEO Greg Flynn called the objections "solvable" in court filings, and the Wall Street Journal reported last week that the two sides were negotiating. On Nov. 29, NPC International canceled its bankruptcy auctions scheduled to conclude December 4. The auctions for NPC's 1,300 locations, including 900 Pizza Hut units, drew nearly 60 potential buyers, according to Restaurant Business. NPC filed for Chapter 11 bankruptcy protection in July, citing a $903 million debt load. Flynn Restaurant Group is No. 1 on the Franchise Times Restaurant 200 ranking of the nation's largest restaurant franchisees, with $2.3 billion in sales in 2019. NPC is No. 2, with $1.6 billion.

Gala Capital's investment in LunchBox Technologies early in 2020 paid off in late October, when the online ordering concept attracted $20 million in a Series A funding round led by Coatue. Investors include former Venmo COO Michael Vaughan and HelloFresh founder Bryan Ciambella. "They just raised $20 million on a $100 million valuation," said Anand Gala, founder of Gala Capital, in an interview about his firm's investments this year. A second investment is EcoTrak, which uses artificial intelligence to simplify and automate equipment maintenance. "It's a fascinating company and they're growing very quickly in the chain restaurant space," Gala said. "And lastly, we made a small investment in Proper Food, which is a fresh grab-and-go restaurant chain, and they have central commissary kitchens and very small units, 500 square feet," which can be run with three people. "We are working with them to evaluate what we believe is the big opportunity of franchising, because the labor model is so good." Gala Capital acquired burger chain Mooyah in 2017.

Direct marketing agency Money Mailer, based in Chicago, acquired the assets of advertising publisher The Inside Coup, which focuses on hyper local, direct mail magazines and digital platforms for small businesses. David Sliman, The Inside Coup’s founder and CEO, will join Money Mailer’s executive team as senior vice president of corporate sales and will report to Tom Baber, CEO of Money Mailer. Baber, who started out as a Money Mailer franchisee 27 years ago, purchased Money Mailer on April 23 with his partners at Local Marketing Solutions Group after COVID-19 hit and Money Mailer shuttered its doors late March. “The transition from ceasing operations to reopening was obviously a shock, but we decided Money Mailer was a brand and business worth saving,” Baber said. “It was a risk during COVID and we knew we had to do it in a short period of time to give the franchisees their businesses back, and we were able to do that in less than 30 days and reopened for operations 30 days after that.” Money Mailer’s recent acquisition of The Inside Coup adds 1.2 million homes to their circulation network, plus it brings their total number of franchisees up to 60. Nearly all employees at The Inside Coup, based in Phoenix, will be joining Money Mailer’s team, totaling about 75 employees. “You have an internal talent pool at Inside Coup that joined us which we’re very happy about, plus more circulation for both Inside Coup and Money Mailer franchisees with much more to sell into for both sides,” Baber said. “You also have expertise in a different product format that both companies can enjoy.” The boost to both brands’ visibility is an added bonus. Money Mailer will continue its transformation to more of a sales and marketing company less focused on production, which is what they heavily leaned on for their first 35 years of existence.

Painting with a Twist acquired Color Me Mine, a paint-your-own pottery franchise that’s now part of Twist Brands, the parent company formed through the deal. The two parties were “able to come to an attractive deal on both sides,” said Twist Brands CEO Joe Lewis, who joined New Orleans-based Painting with a Twist in 2018 from Smoothie King, where he was vice president and general counsel. Color Me Mine reported systemwide sales of $34.6 million in 2019, down 17.5 percent according to the Franchise Times Top 200+ ranking. But despite that sizeable drop, Lewis said from a profitability standpoint, “they actually improved last year.” Lewis says Color Me Mine is a complementary brand to Painting with a Twist. “We felt the concept is solid, it’s been around a long time, it’s proven,” he said. Color Me Mine’s 140 locations will operate as a separate concept with support from Twist Brands, which now has more than 400 studios, more than double the No. 2 player, Pinot’s Palette. Sean Goodwin, Color Me Mine’s vice president of operations, and Controller Carol Assadi will continue to help lead the brand. This is the second acquisition for Painting with a Twist, which in 2018 scooped up 20-unit Bottle & Bottega and added co-founder Nancy Bigley to the executive team as COO. The rebranding of those locations to Bottle & Bottega by Painting with a Twist is on pause, noted Lewis, because just as Painting with a Twist was about to roll out a new studio design, the COVID-19 pandemic hit. “So we’re waiting on that to ask those franchisees to transition,” he said.