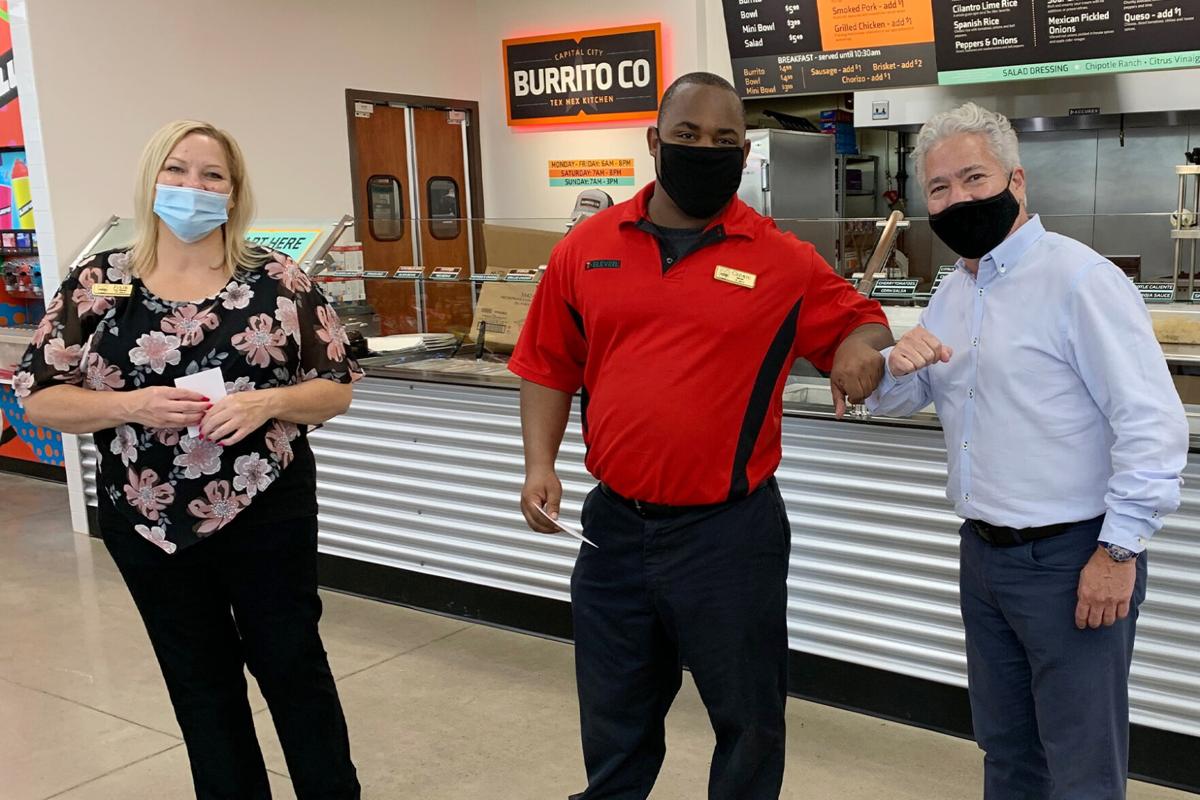 “You’ve got to be there in the stores, where the action is happening,” said Chris Tanco, COO of 7-Eleven, shown above right with associates during one of his many visits during the pandemic.

Chris Tanco, COO of the Irving, Texas-based 7-Eleven, credits their stores’ designation as “essential” during the pandemic, plus quick work to respond when COVID-19 restrictions began. “We were fully prepared,” he said. “We started a daily emergency COVID-19 call that galvanized the entire 7-Eleven system. The No. 1 principle for us is to be customer-obsessed.”

Work done before the pandemic also paid off in spades last year. “For example, we had launched our 7Now Delivery app out of several hundred stores in 2018. We added more in 2019, so we were well positioned in coming into the pandemic,” he said in an interview in late August.

Saying he tests out the service himself, he added, “We did over 3,000 products for delivery, and we deliver within 30 minutes. When I get delivery to my house, and I said don’t flag me as the COO, I get mine in 22, 23 minutes.”

Another new initiative is 7-Eleven’s “Evolution” stores, now numbering eight but with more to come, which he calls “more like a laboratory store that allows us to test different platforms,” especially its three new restaurant concepts, led by Laredo Taco Co. The idea is to “see which really resonate the most with customers, and if we get a lot of success, we take those ideas, those platforms and we retrofit them into the store standard.” Sales are “so much higher in the Evolution stores,” he said, up to three times higher in some cases.

Tanco joined 7-Eleven 11 years ago, initially running its international business for six years. He’s been COO for roughly five years. Before that he spent nearly 20 years with Pizza Hut when PepsiCo owned it and later Yum Brands.

But his roots in hospitality run deep, back to when he operated three restaurants in the Philippines. “Being an entrepreneur, you feel it. It’s your money; it’s your livelihood,” he told D CEO magazine in October 2020. “A lot of corporate people don’t understand that because they haven’t been a franchisee or haven’t been entrepreneurs; they haven’t put their own money at stake—their own blood, sweat, and tears. So sometimes, they don’t realize what a franchisee is going through. I fully understand, and I can put myself in their shoes.”

Last year he spent lots of time in the stores, masked up but talking to owners and managers and customers, encouraging them in times of trouble. And there are a lot of stores. “We have over 77,000 stores globally; we went from 29,000 in 2005 to 77,000 stores in 16 countries, and that was the demarcation we passed in just the last few months,” he said.

“You’ve got to be there in the stores, where the action is happening. You have to talk to customers, you have to talk to the operators, and find out what’s going on, not just understand the symptoms but the actual root cause that’s happening,” he said. “I don’t know you can do that remotely. It’s quite different when you’re talking to franchisees, and that allows us to really fine-tune our strategies.”

This year, he and CEO Joe DePinto are focusing attention on their $21 billion acquisition of Speedway, the convenience store arm of Marathon Petroleum Corp., with approximately 3,800 stores in 36 states across the U.S. That acquisition, which closed in May 2021, brings 7-Eleven’s North American portfolio to 14,000 stores.

Will it finally allow the company to push past McDonald’s for the No. 1 spot on the Franchise Times Top 400 list? Tanco isn’t saying, except to call the acquisition “transformational.” We’ll check back next year.