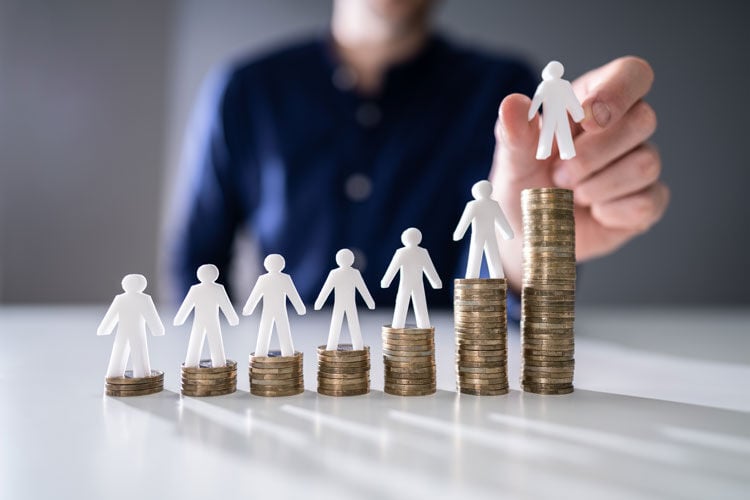 As the country tracks toward a $15 federal minimum wage, two analysts took a look at what it would mean for the restaurant space.

Peter Saleh of BTIG and Michael Halen of Bloomberg both released reports. A $15 minimum wage is part of the Democratic platform. The latest look at the plan was a phased approach from the current minimum wage of $7.25 to $15 by 2026.

That, according to Saleh, means a federal minimum bump will have drastically uneven effects across the country. Places like California won't see a big impact, but states across the Southeast could see a big jump and compounding effects on top of that.

"For many states on the West Coast and in the North East, the impact will be negligible, as their current mandated state minimum wage is already well above the federal level of $7.25. For other states including Texas, Oklahoma, Georgia, and Pennsylvania, the impact could be more pronounced as their minimum wages will be forced higher," wrote Saleh. "Additionally, we see wage compression as another headwind to the restaurant industry as more experienced employees will want to be paid more than new crew members earnings the minimum wage."

He said the potential of losing that tipped wage could be dramatic and as some leading cases showed, didn't work.

"The average hourly wage for waiters was $12.88 in 2019, $10.75 more than the $2.13 minimum for tipped staff. A $15 wage may force chains to adopt more wireless handhelds for servers and reduce waitstaff. A European model of raising prices and removing tips is more equitable for kitchen employees but isn't a viable option in the U.S., as evidenced by failed attempts by Union Square Hospitality and Ignite Restaurant Group," wrote Halen.

In short, he said it would be a "nightmare" on top of 2020, especially for margins.

"Higher wages may cause more acute margin pain than in most sectors. Labor was 31.3 percent of 2019 restaurant-level costs for companies we cover, surpassing food (29.6 percent) as the top unit expense," wrote Halen.

What will happen as wages do rise to $15, stepped or abrupt? Both Halen and Saleh pointed to more automation and fewer jobs.

Halen said a higher wage could push more operators to make costly investments in kiosks, wireless handheld tablets and other tools that reduce labor hours at the unit level. He cited a report from the Congressional Budget Office that estimated a $15 minimum wage by 2025 would cut 1.3 million jobs in the U.S.

Saleh wrote that the trend toward smaller footprint locations, ghost kitchens and smaller menus could all be accelerated. He also predicted menu prices would rise at a 1 percent greater rate than the standard 2.5 percent seen annually.

"We expect restaurant operators to streamline menus, slashing low mix items in an effort to drive labor productivity. In our view, this dynamic suggests a much higher sales hurdle for menu innovation going forward. Lastly, we believe operators may be more willing to utilize ghost kitchens which operate without a dining room and yield 15 to 20 percent labor as a percent of sales, significantly less than traditional restaurants which operate with approximately 30 percent labor," wrote Saleh.

There is a counterpoint. The Congressional Budget Office also noted that a $15 minimum wage would lift 1.3 million people out of poverty and put an additional $8 billion in household wealth into the economy. Brands and operators in high-wage states like California have often done better than the industry average despite the labor costs difficulties.

“That money would be put to work through consumer spending, and savings, ultimately providing support to the broader economy,” Mark Hamrick, senior economic analyst at Bankrate.com told CNBC.