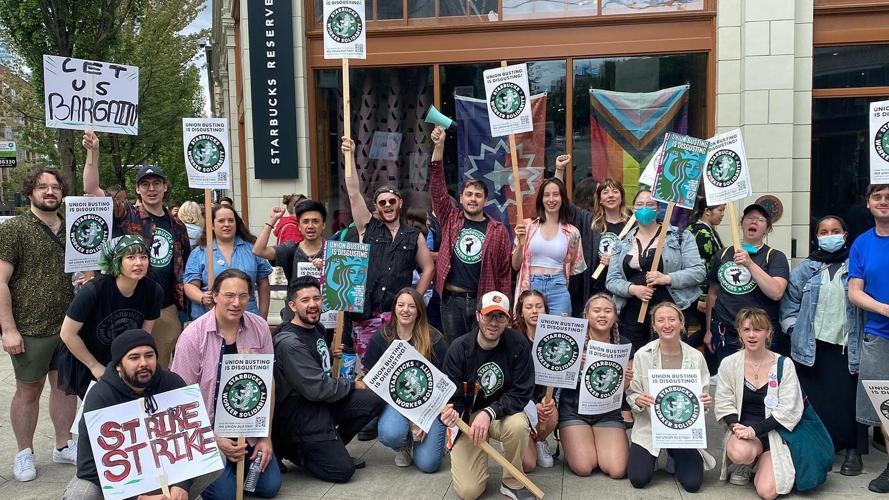 Union members picketing at a Seattle Starbucks in July.

Employees at 145 Starbucks stores and counting voted to unionize since just last December. In April, an Amazon warehouse was the first in the giant retailer's history to vote in a union. In July, a Chipotle store in Maine filed a petition to unionize, the chain's first.

The push is on to unionize restaurant and retail chains. During the first nine months of fiscal year 2022, union petitions filed at the National Labor Relations Board increased 58 percent, to 1,892, from the prior period. Petitions filed in the first six months of 2022, 1,411, were the highest since 2015.

What's behind the union drive? And when will it arrive at a franchised chain? (Chipotle, Amazon  and Starbucks are not franchises.) Barry Saltzman of Pitta Law, which represents unions, said the pandemic multiplied workers' misery.

For many people, "just in general, when they were isolated and even more so when they had to work their way through COVID and felt their own mortality, said, 'Wait a second, there's got to be more to life than this.'"

Organizing a franchised chain is difficult because of the many individual business owners and high turnover at restaurants. Meanwhile, franchisors lobby fiercely against efforts to count them as joint employers along with their franchisees, which some say would make organizing efforts easier.

"It's being fought tenaciously," Saltzman says. "And the franchise industry has a lot of political allies. The stakes are big and the fight is very, very fierce. I don't see that quickly changing."

Thomas Gibney of Eastman & Smith, which represents employers, says the explanation for today's union drive at restaurant chains is simple. "I don't mean to be cynical, but most union organizing is about getting new sources for dues, so it's an untapped market."

The tides change with different presidents. The NLRB under the Obama administration allowed units smaller than the entire workforce to organize, which in turn is one reason he believes organizers may soon target franchisees—to gain a foothold in the chain.

On the other hand, a rule issued by the NLRB regarding joint employer under Trump's administration was viewed as favorable to franchisors. "The Biden board has signaled it's a priority for it to go back to where the Obama board had been, but it's harder for them to do that because the Trump board actually issued a rule, it wasn't just a decision in a case," Gibney says.

"It is hard as a labor attorney to say what is the current law, when you have the constituency of the board changing from administration to administration. And with the last three administrations, there has been little reluctance to change recent precedents, and to change things back."

We'll have more of their discussion in an upcoming edition of Franchise Times.