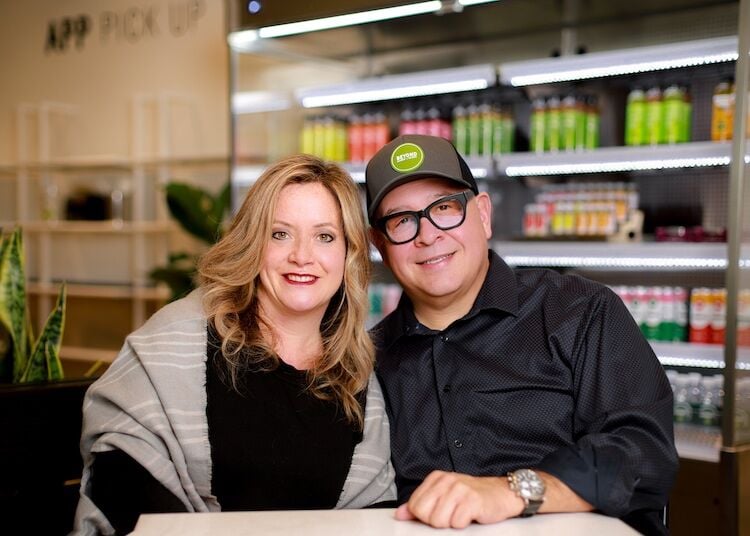 Pam Vivio and Mijo Alanis, the husband-wife duo who founded Beyond Juicery + Eatery in 2005 which offers smoothies, salads, juices and wraps.

Mijo Alanis started washing dishes at 15 years old to fund his first car. From the moment he began working, he always looked to the next step up and became general manager of the restaurant by 18.

“I soon learned I loved the restaurant business, and I worked every aspect. Bartender, server, I was even locked in at night to clean,” Alanis recalled.

He met his future wife and business partner, Pam Vivio, when she came in one minute before the restaurant was closing. He credits that moment to forming his philosophy of making sure every customer receives the same attention and level of service, no matter when they come in.

“I should’ve known from that moment that we’d always be one minute from close when I met her,” Alanis joked.

Their story is part of a Franchise Times digital series this month featuring founder success stories.

After Vivio received a graduate degree from an Arizona college in international business management, she and Alanis moved to Michigan. Alanis struggled to find a job there and ended up working with Vivio’s father, John, in his restaurant called Vivio's—the one thing he said he would not do.

“I said, John, I love you, but I don’t want to work for my girlfriend’s dad. He said, 'how about just one day?'” Alanis said. “I said OK, went in one day, and after that shift, which was chaotic and crazy busy, he said, ‘can you come back tomorrow? Just try it.’ That decision on that day was the best decision I ever made in my life.”

From how to stick a key in the door in the morning and locking up at night to the cost of insurance and napkins, Alanis said he also learned there how to live life with a family in the restaurant business while working nights and weekends.

“Luckily, my wife has been very supportive having come from that (background), so it’s nothing for me to get home at 2 a.m. in the morning and work on holidays,” Alanis said. “There’s never a conflict there. The standard operating procedure of the restaurant always came first.”

Starting from when he was a dishwasher, Alanis took note of what customers were throwing away and what they liked. He noticed people tossing out hamburger buns and french fries around the year 2000, and started asking why. They replied that they didn’t want to feel full or were trying to eat healthier, which caused Alanis to flash back to a juice bar he stopped at after hiking Camelback Mountain in Arizona.

“Something about that juice bar made me feel different. Just that fresh juice or smoothie after working out or doing something hard, and that stuck with me. There was no place like that in Michigan,” Alanis said. That’s what sparked his idea for a fast-casual health food restaurant.

Alanis and Vivio ended up founding Beyond Juicery + Eatery in 2005, which offers smoothies, salads, juices and wraps. Franchising since 2019, the brand has grown to 33 open locations operated by 19 franchise groups.

“There are pivotal moments in everyone's lives that steered you where you are today,” Alanis said. “It was conversations with my wife, father-in-law, and the fact I was a dishwasher that made me think this way and be what I am today.”

“I even look at the people on our team and the pivotal moments with each one of them,” he added. “They didn't know if they were going left or right, and we were able to paint a picture of what could be—that's what's exciting, for the people around me to get excited about their career, see what they’ve built and created, and continue to create and learn.”