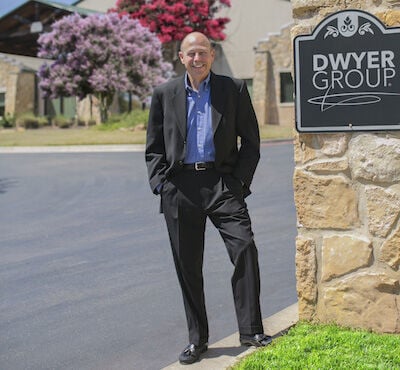 Mike Bidwell, CEO of Dwyer Group, acquired 11 service brands since August of 2014 and the franchisor was itself acquired by Harvest Partners this week.

One every four months. That’s the number of acquisitions, or 11 in total, the Dwyer Group made since August of 2014 when The Riverside Co. acquired the franchisor. Harvest Partners of New York is the new majority investor, announced June 4.

"It was really a crazy sprint," said Dwyer’s CEO Mike Bidwell. "Even while we were in this last process we closed another one, Real Property Management." About Harvest Partners, Bidwell said, "they thought it was very likely we would continue to have success being acquisitive. They like our growth trajectory."

Unlike its sale to Riverside in 2014, which was a private process when Riverside contacted Bidwell, Dwyer took this one to the wider market with Harris Williams as investment banker.

"We’ve had a lot of inbound interest on Dwyer for a while. It’s a very frothy market so folks have been following companies that they think will be going out at some time" to find a new private equity investor.

With Harris Williams, "we had quite a broad process. Each time we met with Harvest, the management team got more and more comfortable with them. We had an opportunity to pick our next partner and we picked Harvest," Bidwell said, adding Riverside's fund was beginning to mature, they were raising a new fund and thought it was a good time to get a great price for Dwyer.

"They didn't have to exit...we had been so productive that they knew they could get a good return," he said.

Harvest Partners of New York City owned Canto Restaurants in Puerto Rico, a franchisee for Yum Brands. They also bought Driven Brands, the automotive aftermarket franchisor, in 2011 and sold it to Roark Capital in April 2015. "So they’ve had it on both sides and so they definitely know franchising. Franchising’s a relationship business," Bidwell said.

When Harvest Partners bought Driven Brands, they appointed a new management team and independent board, but Bidwell laughed when asked if that was part of the plan this time. "Well we certainly hope not. I’m not in on that plan," he joked. "They say that’s one of the things that they really like," the management team. "We’ve got a great management team here; there’s seven of us at the senior level," he said. "As long as we keep growing, everyone’s going to be fine."

Bidwell said the acquisition pace might slow a bit from the frenzied clip of the last three-and-a-half years, but Harvest Partners has the capital to fuel much bigger transactions. "Some acquisitions have been in the 10s of millions of dollars and some have been north of that. If we wanted to do something in the 100s of millions of dollars range," Harvest would be on board. "We’ve got big ambitions here."

"We wanted to make sure we had alignment on, Look, can you keep making capital available if we want to do some ambitious acquisitions, and they were absolutely signed up for that," he said about Harvest. "There’s not that many verticals left, but we’d like to get something chunkier in the future."

Based in Waco, Texas, Dwyer Group is a holding company of 20 service brands and supports its franchises under the umbrella brand Neighborly.