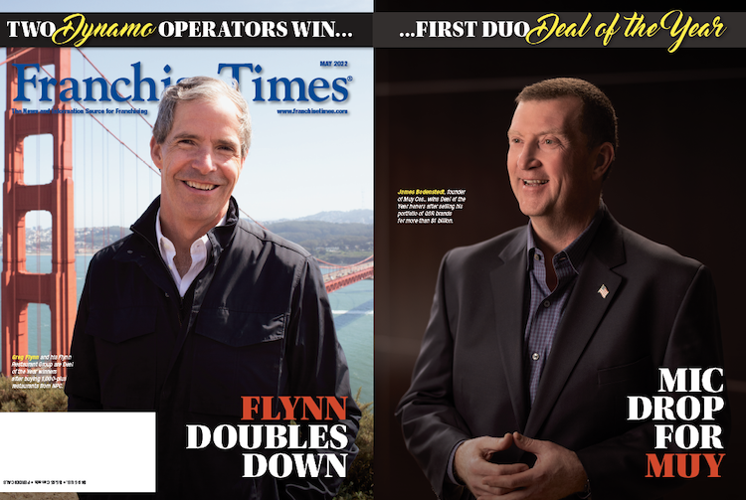 It's the first time in the project's 10-year history that dual deals were recognized. Flynn more than doubled his restaurant count, and Bodenstedt executed a grand exit for more than $1 billion.

Flynn Restaurant Group bought 937 Pizza Hut and 194 Wendy's restaurants from NPC International in 2021, nearly doubling its annual revenue to more than $3.5 billion and keeping the Pizza Hut employees together after NPC's bankruptcy filing. The Cypress Group represented NPC and shares in this award.

One of the deal's attractions "was how difficult it was going to be, because that's a barrier of entry," Greg Flynn told Franchise Times in its May edition, published today. "I don't think there were many other potential buyers that could get through the process. I have a high tolerance for pain."

James Bodenstedt, founder of Muy Cos., sold all 755 of his Taco Bell, Pizza Hut and Wendy's restaurants in a grand exit in 2021 for more than $1 billion, also creating 17 millionaires among his executive ranks who had equity. Auspex Capital, Bodenstedt's longtime investment banker, shares in the award.

"I started at McDonald's at minimum wage" as a teenager. "It's not the minimum wage business. It's the maximum opportunity business," Bodenstedt said about his career in restaurants.

Flynn and Bodenstedt share a double, gatefold cover in Franchise Times' May edition. Ten other Franchise Times Dealmakers winners are featured as well, with details about how they attracted their new suitors and now available in print and online.

"These dealmakers are smart, creative and most of all relentless in finding the capital they need to grow their companies," said Franchise Times Senior Editor Beth Ewen. "Our panel of judges, all experts in franchise finance, noted the persistence and creativity needed to land the boldest deals in franchising."

Started in 2002 to highlight excellence in growing franchise companies through mergers and acquisitions, the Franchise Times Dealmakers project this year chose two deals to share Deal of the Year for the first time. "These deals were so large, complex and had so much impact that we could not choose only one," Ewen noted.

The rest of the 2022 Franchise Times Dealmakers award winners are:

FAT Brands and its $917.5 billion in strategic acquisitions over 18 months.

Levine Leichtman Capital Partners purchase of Tropical Smoothie Café and sale of Nothing Bundt Cakes, among others.

Meritage Hospitality Group and its 50-store area development agreement with Taco John's, with the option to build 150 more.

Princeton Equity Group's acquisition of seven franchisors in 18 months, including D1 Training and Card My Yard.