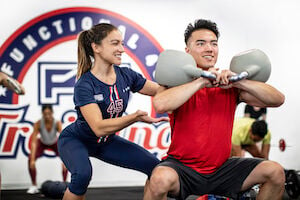 At F45 fitness franchises, the "F" stands for functional and the "45" is how many minutes the workout takes.

Two fitness franchises born in Australia and now pursuing U.S. expansion—F45 Training and the much smaller Body Fit Training—are suing each other in a long-running dispute over technology and business strategy.

Body Fit Training filed suit on August 6, seeking a declaratory judgment in federal court in Central California that two U.S. patents owned by F45 Training are both invalid and not infringed by Body Fit Training.

Body Fit's co-CEOs, Cameron Falloon and Richard Burnet, filed their lawsuit to "defeat F45's improper efforts to assert invalid patents to try and hinder our ability…to advance what we believe to be a superior business model and approach to fitness training," they said in a statement.

"We see the United States as an important next step in our global expansion and even though we are a much smaller company, we do not intend to let F45 or any competitor push us out of the marketplace."

F45 is set to go public via a special purpose acquisition company formed by Crescent Capital Group, which has $28 billion of assets under management. Through an outside spokesperson, F45 declined to comment for this article.

Bob Beyer, executive chair of Crescent Acquisition, is bullish on F45, he said during a webinar promoting the IPO in June. "After reviewing over 100 actionable opportunities, we became convinced" F45 was the one. "This is simply one of the most exciting public market stories we've heard."

Adam Gilchrist, CEO and founder of F45, said on the webinar the "F" stands for functional and "45" is the number of minutes it takes to do what he calls "the world's best workout." He started the chain in 2013.

He ended his pitch to investors by touting success in Venice Beach, California, home of the original Gold's Gym and one of the world's most competitive fitness markets. "We've actually smashed it here in the U.S.," he said on the webinar.

F45 started in Australia in 2012 and has more than 1,700 units throughout the world. Last year the chain claimed Body Fit Training infringed on its innovation patents around management of franchises via a central computer system, according to The Sydney Morning Herald. F45 claimed financial losses because franchisees bought from Body Fit Training instead of F45.

Body Fit Training denied it operated studios like F45, and pointed out its astro turf tracks, ski machines and other fixed equipment in its studios, the Herald article said. Started in 2017 by Falloon, Body Fit Training has about 50 studios around the world, with a big push into California now underway.