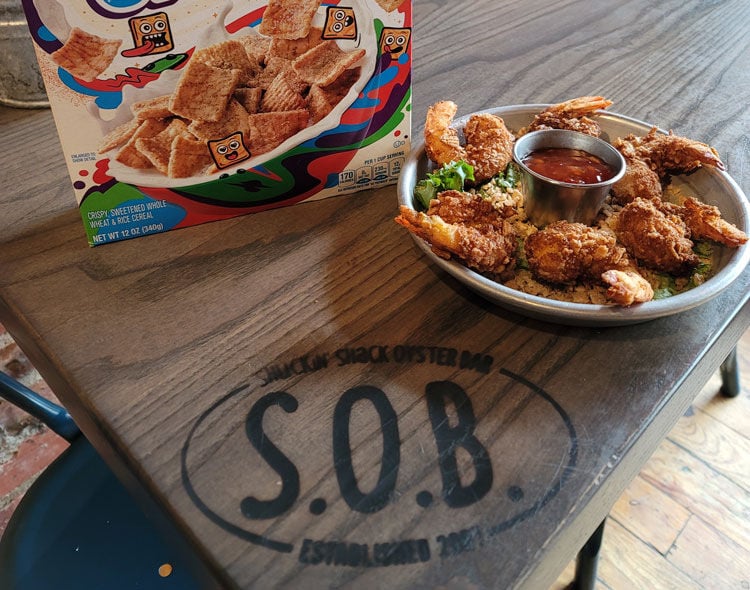 For a few days, the social media world was all aflutter with the latest viral meme. This time, a guy said he found some shrimp tails in his Cinnamon Toast Crunch.

It was the perfect recipe for a viral moment: weird, kind of gross but with ample room for jokes because nobody actually got hurt. Without diving into the rabbit hole of nonsense that includes actress Danielle Fisher, best known as Topanga from "Boy Meets World," as the shrimp guy's wife, let's just say it caught a lot of attention.

Shuckin' Shack Oyster Bar, the 16-location seafood franchise based in North Carolina, was able to grab a sliver of that attention with a viral tie-in item of its own: Cinnamon Toast Crunch Shrimp.

CEO Jonathan Weathington said he first saw the story on Reddit, and largely ignored it. Then it hit the network "news of the weird." The next morning, he woke up to a text from a friend saying they could make something of it.

"I came to the office, walked down to the Dollar General and got family-size box, walked to the restaurant and one of the lead cooks there and I said let's try a few things," said Weathington of picking up his own Cinnamon Toast Crunch to try out in the kitchen. "He said, 'What about double-battering it?'"

The result was a buttermilk, flour and pulverized Cinnamon Toast Crunch batter with a side of Thai chili sauce. It's a lot like one of the best sellers, the sweet and spicy Sharkbite Shrimp, but with a dash of cinnamon, said Weathington.

"It's got that sweet and savory favor to it. Our shrimp is such high quality, so there is a little bit of a sweet flavor. So, when you add the cinnamon sugar and fry it, it's got this kind of caramelized cinnamon taste," said Weathington, noting it's not exactly his new favorite. "I don’t do a lot of sweet meat; I don't like sweet and savory together. But the other people who were there all tried it and they loved it."

The verdict is somewhat split, and it's selling "here and there. I don't think everyone's intent when they come to a seafood restaurant is, 'I want some Cinnamon Toast Crunch,'" said Weathington.

The social and media response, however, has been loud and frequent. Local radio stations picked up the story, food media has as well, as did the regional paper. It was a hit on social media platforms, too. He said that's the real lesson here, the shrimp isn't going to be a big sales driver, but it puts the brand into the social media conversation and gives the marketing team something new to talk about, regardless how silly.

"We did not use it to drive sales. In fact, if we had held it out longer, we could have had this timed with April Fools," said Weathington. "I think playing along with it is a good rule of thumb. We try to participate in those because it's fun, that’s really us as a brand, that’s our brand DNA. None of us take ourselves too serious, we're consistently sharing meme ideas here and there."

Something like that wouldn't resonate with a white tablecloth seafood restaurant, which is the core marketing lesson here, Weathington said. Shuckin' Shack doesn't participate in every viral bit of nonsense, but when there's an opportunity that makes sense he's happy to seize it.

He said franchisees, who are not required to make their own Cinnamon Toast Crunch Shrimp, thought it was pretty funny. He said he even got a few "LOLs" when he sent out the recipe and technique. Currently, it's only on the menu for the flagship in Wilmington, North Carolina, and it will only be there until demand or the local Dollar General runs out of cereal.

As for the next viral menu item? Weathington said the team is pondering the latest aquatic meme: the Suez Canal ship.