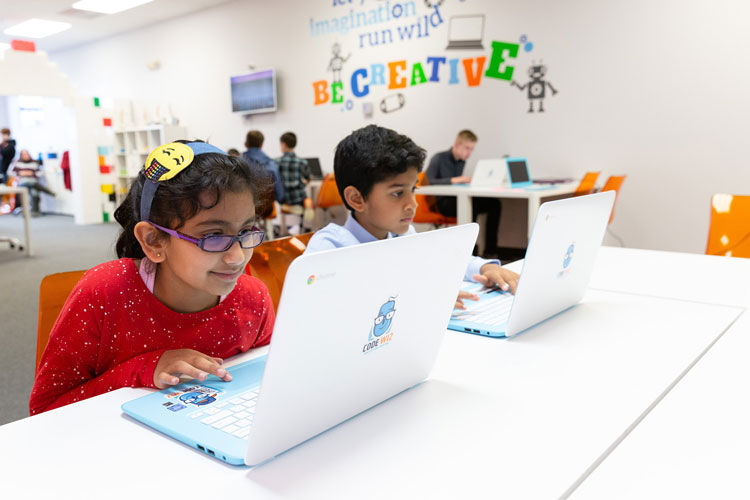 Starting a franchise brand is no simple task, but as Code Wiz founder, CEO and "Nerd-in-Chief" Ruth Agbaji says, there is an active network to help address the many challenges that have come up in her childhood code-education concept.

Agbaji said she saw the need for childhood coding education while in college earning her computer science degree and then as she worked at Microsoft. Growing up in Nigeria, she did not have a lot of exposure to coding during childhood. It wasn’t until college that she found a passion for code, robotics and electrical engineering (her other degree). At Microsoft, she saw a stark difference between herself and lifelong coding peers.

"You could tell between me and someone who learned it when they were 10, of course they were better," she said.

She started Code Wiz to help kids learn modern tech skills and also problem-solving skills for those kids that don't go on to become professional coders. Kids even learned to help with the COVID-19 PPE shortage by printing masks and face shields.

Since founding the concept, it's grown to six locations, including four franchised locations. It hasn't been easy, but the educational mantra kept her and early franchisees going, and Agbaji said she found a fertile network of support to address almost every challenge. She said coming from Nigeria, seeing the broad and helpful franchise community was illuminating.

"When you come from the other side, you see so many people with great ideas who want to do their own ideas but there's zero support, and banks only give loans to rich people," said Agbaji. "But here, you have the SBA begging you to come take loans, banks are there, the IFA is super supportive. Everyone is kind of rooting for you. It really sets you up to succeed. It almost feels irresponsible not to take advantage."

And she did. She was part of the International Franchise Association's NextGen In Franchising competition in 2017, which helped her tap into that deep network of helpful folks in franchising.

"I didn't win, which sucked at the time because I had plans for that money, but the network that I gained there has been so much more than any prize I could have won," said Agbaji. "The thing about franchising, it's like a big family. People generally just want you to succeed and give you good information."

An important part of that support system was financing. Getting money for a new franchise is never easy and often not enough.

"In terms of financing, we've been blessed. I work with a local bank here in Massachusetts. And just leveraging the story, and the vision and the mission, they agreed to finance any franchisee we have," said Agbaji as she gave props to Northern Bank and Trust.

As with any business, there were challenges. She had to learn quickly how to talk to franchisees and how to work with them. She also had to figure out who the right franchisee was for the very early stage of growth—it's not the big-money, passive investor type to be sure. She's learned that those who see education as part of the ROI is part of it, and so is a willingness to try new things.

"The people who are drawn to emerging brands are more entrepreneurial, so they are happy to learn and explore," said Agbaji. "For us, we need someone that enjoys thinking of ways to market the offering, we find that our operations are pretty simple. If you follow that system, you're good. The kids love it and they stay. The biggest challenge is getting kids to the door, so people who are creative to come up with ways and ideas to market, that works great for us."

With limited resources, how exactly to support franchisees—even those that are eager to figure things out—was another challenge.

"For an emerging franchisor, what I'm learning, it's not necessarily about having all the fancy tools and having the fancy CRM and all that, it's really about saying, 'Hey, I'm there for you if you need me, just pick up the phone and I'll be on the other end and we'll walk through this together.' I think for an emerging franchisor, who is always budget constrained, it's just making people feel supported."

Talking through the daily challenges through her founder's lens, she said, is one of the most important things for the handful of franchisees. The network and her early experience also helped he see clearly what she's good at: innovation and marketing. Spreadsheets and key performance indicators? Not so much.

She said her next phase of growth will depend on finding a strategic partner who can help bring more structure to the vision and help it scale to the goal of 1,000 locations in the first 10 years.