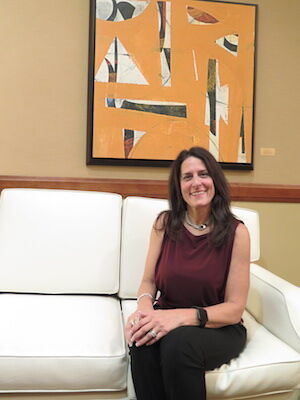 Nancy Bigley is the new COO at Painting with a Twist, after the largest brand in the paint-and-sip business acquired in mid-October the company she co-founded, Bottle & Bottega.

Painting with a Twist gained 20 units in nine states when the New Orleans-based brand acquired Bottle & Bottega, but that wasn’t the biggest prize from the transaction. That would be Nancy Bigley, co-founder and CEO of Bottle & Bottega, who will now be COO of the much bigger brand.

"I don’t know if I would say I wouldn’t have done it without her, but that’s what was extremely attractive to me," said Joe Lewis, who joined Painting With a Twist as CEO about six months ago. A mutual colleague introduced him to Bigley, and said Bigley was potentially interested in an acquisition. "That’s how the conversation started. I just found out the quality of person Nancy was, and that’s kind of what I see with Bottle & Bottega. It’s small but everything is done with quality."

He believes she can help with the assimilation of the new brand, too; although a timetable is not set, the intent is to convert B&B franchises to the Painting with a Twist brand.

Founded by Cathy Deano and Renee Maloney nearly 10 years ago in New Orleans right after Hurricane Katrina, Painting with a Twist has just over 300 units, more than double the No. 2 player, Pinot’s Palette. B&B franchisees will benefit from economies of scale and better buying power, Lewis believes.

Lewis was with Smoothie King, another New Orleans-based brand until CEO Wan Kim moved headquarters to Dallas recently. There he worked for co-founders Cindy and Steve Kuhnau as they built a smoothie franchises before anyone knew what smoothies were.

He sees similarities at Painting with a Twist, where the co-founders pioneered the paint-and-sip industry that now has many copycats, and benefited, he believes, from being first to market.

Lewis said this was a relatively small transaction that used bank financing. He isn’t planning more acquisitions, but would be "open to it in the future as long as it can benefit the company. I would say we would definitely consider it but we would want it to be a very strategic move."

Bigley was with Dunkin’ Brands, American Leak Detection and The Dwyer Group, now known as Neighborly, before co-founding Bottle & Bottega seven years ago. Many of B&B’s units are in Chicago; Portland, Oregon; and Northern California, three markets where Painting with a Twist is not, another advantage of the acquisition.

Known as a thoughtful and vivacious executive, Bigley talked about the difference between a small company vs. a big one in an interview with Franchise Times last January.

"When you’re the top person in the company there’s no hiding from anybody. It’s all personal, and it’s on you if there’s a mistake and it hits your heart a lot harder," she said. "I’ve learned and am still learning simplicity. As an entrepreneur we have so much passion and drive but you can’t go so fast that everyone’s in your rearview mirror."