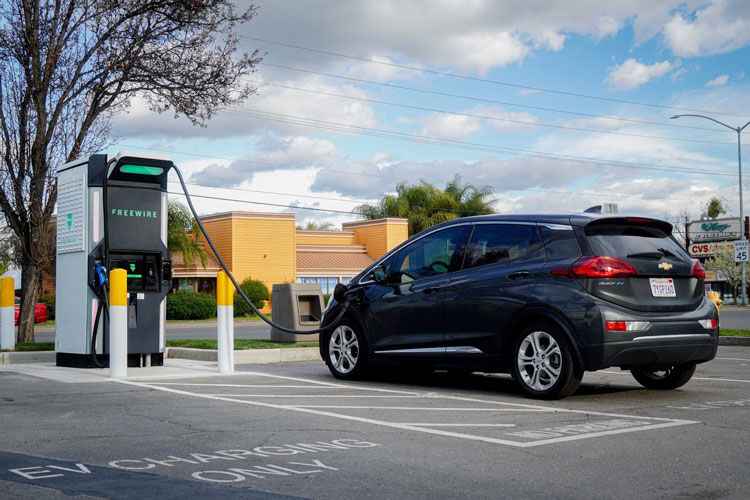 A lot of businesses are looking to capitalize on the electric vehicle explosion, but maybe the most effective way is capturing those drivers when they need to recharge.

Installing a charging bank could be a big opportunity for restaurants to grab some of the projected 35 million electric vehicle drivers by 2030 and keep them around while they charge up. On average, people spend 25 to 30 minutes charging their car. That's far longer than the typical gas-station stop of 7 minutes and perfect timing for a relaxing bite to eat and a pit stop.

Installing a bank of electric vehicle chargers is no small task or cost for the fast-charge stations people want while they're on the road. Fast charging gets people back on the road in that 25 to 30 minutes, but each charger can cost as much as $50,000, according to a survey of property managers. On top of that is securing the incredible amount of power necessary to charge an EV that fast, a vastly expensive and complex job.

Arcady Sosinov, the founder and CEO of charging infrastructure maker FreeWire, said there is a good reason only major retailers have done big charging banks.

"It's really difficult to get that kind of power to a site. First, it's expensive. You'll have to go to the utility and they'll have to assess if they have that capacity at the substation level. Then they have to do easement on the roads. You need a new transformer, a new panel, then you have to dig up your parking lot. The cost and complexity is overwhelming for smaller companies—it's overwhelming for BP," said Sosinov.

A typical restaurant might have 100 kilowatts of service. That's the same amount of power necessary to fast-charge a single electric vehicle, so the rollout of charging was largely limited to retailers that already had massive power infrastructure. He said there are new tools out there to make things much easier on the end business. FreeWire is the first to market with a tool that allows small businesses to offer charging without those power needs.

Basically, FreeWire's Boost Charger is a big battery that sucks up available power and saves it for the next EV charge.

"We integrate a large battery inside our charger. That battery acts as a buffer. If they only have 50 kilowatts, that’s fine, that goes into the buffer," said Sosinov.

Simplifying the technology drastically, he linked it to a bathtub. It draws power to charge the battery and drains it quickly when an EV plugs in. So while FreeWire’s charger isn’t necessarily cheaper, it means instead of a new power line, digging up a parking lot and paying a lot more for power, his company can just show up with a device, plug in and get to charging. Sosinov said deployment happens in about three hours.

So why is adding this technology so enticing for businesses and why did FreeWire raise $105.2 million? The way EV drivers drive is a big part of it.

"Charging patterns are different than fueling patterns. When you see empty, you get gas. Every time an EV driver sees a charger, they get a little," said Sosinov. "The vehicle itself also limits the charging rate. Because of those factors, the battery doesn't need to be that big. The other way we think about it, and what we tell our franchisees and QSR folks, would you rather have fewer ports or more?"

He said the ROI is there, but not for the charging. Essentially, adding a charging bank replicates the central idea of any traditional gas station, but with a lot more time spent on site.

"Our average duration is about 25 minutes in our network. That’s a good amount of time for the retailer," said Sosinov. "For the retailers, it's bringing people in the stores. Most retailers today are not looking to generate an ROI on the charging itself. They know at best they're breaking even."

Incentives can sweeten the deal. A program in California offers $80,000 in rebates per charger; a Massachusetts program offers $100,000. That, Sosinov said, de-risks the investment even further.

"It's just a low risk and in many ways a low-cost way for me to drive more traffic. I'm going to capture the people who went to a gas station and the dollars spent there," said Sosinov.