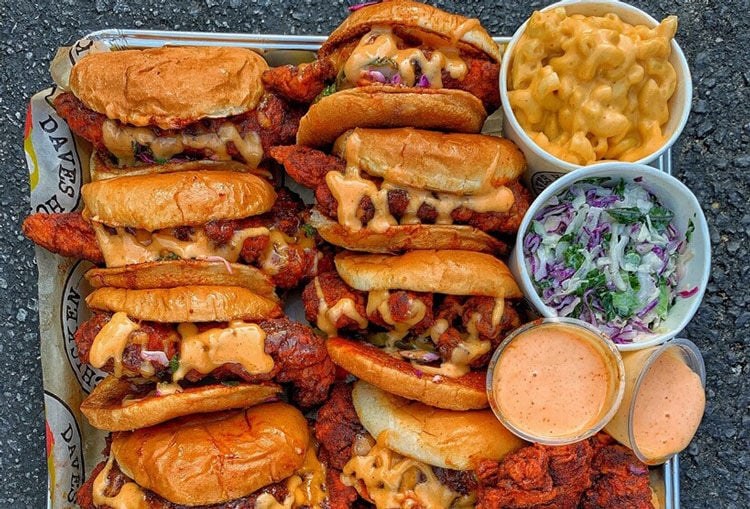 Dave's Hot Chicken has 17 restaurants open with hundreds more in the pipeline.

Things have changed a little bit for Dave's Hot Chicken co-founder Arman Oganesyan. When the concept started out in a parking lot in Los Angeles, he wasn't the chef or the business guy, and there wasn’t anything left over for a marketing budget after the four founders bought a fryer.

"We were just screaming, 'Hey, we got chicken," said Oganesyan. "The first day it was $40, the first few days we were giving out food and people started to show up."

But as the story goes, L.A. food writer Farley Elliott saw a post from Oganesyan on Instagram in 2017 featuring the fiery red chicken and came to check out the brand (if you could call four guys and a fryer a brand). He wrote the chicken "might blow your mind," and the coverage certainly helped blow the tent walls off their parking lot pop-up.

"He wrote this crazy article and we get to the pop-up the next day there's 95 people waiting," said Oganesyan. "We had to set up in front of everyone and then our fryer would take four or five minutes per order. We took all the money we made that day and bought a bigger fryer."

The lines just never stopped. Fans went insane for the chicken and the irreverent, playful social media just pushed it further. The founders, who along with Oganesyan include Dave Kopushyan and brothers Tommy and Gary Rubenyan, planned to save up for a food truck, then a brick-and-mortar location and grow organically. At this point, Oganesyan said they thought they would have two locations; instead there's 17 locations open and 400 in some stage of franchise development.

It wasn't a simple task to wrangle the long lines into runaway success. There were some tricky decisions, but the biggest was landing on a partner who could help.

"We met a few people that wanted to partner, but we didn't like them," said Oganesyan. "We'd call them back and a lot of them talked to us like we were these dumb kids and wanted to take advantage of this. But we weren't, we went from a parking lot to a store in a few months."

They were getting serious about finding a good partner. He said there were a lot of copycats popping up, literally in other parking lots across L.A.

"I remember telling the guys, at this level, it's not who has the best food anymore. At this point we knew we had the best food so we need to actively be looking for people experienced in the restaurant industry so we can expand and people think of the brand as the brand for Nashville hot chicken," said Oganesyan.

One day, he saw a note saying to call John Davis, the movie producer, who wanted to talk.

"He was asking about us. He was the first person who was asking about us, not how much we make. We had a great time with him and he wanted to meet Bill Phelps. Same thing: amazing guy, really funny, really cool. He gave us advice and shared stories," said Oganesyan. "At the end of that meeting we were saying of anyone, we should partner with these guys. It felt like we were talking with our friends, not having a meeting."

The rest, as they say, is history. Phelps came in as CEO looking to create the same magic he did with Wetzel's Pretzels and so far it seems pretty magical—assuming all 400 of those locations open. Things changed quickly, but Phelps made sure to keep the founding passion in the mix.

Oganesyan, now the chief brand officer for the company, is no longer literally screaming, "We got chicken!" but a scaled version of that.

"It hasn't changed much since the parking lot, but it's more evolved," said Oganesyan. "We didn’t want to lose any of that. As it grew to more and more locations, Bill and everyone realized it was really valuable" to have the founders' voices. "As a founder, you know what's best for the brand."

He's still on Instagram "all the time" and making founder decisions, not necessarily corporate decisions. Once, a fight broke out in a location. Instead of trying to scrub the video from the internet or putting out a carefully worded PR statement, Oganesyan kept it as playful as he did in the parking lot.

"I posted it on Twitter and said, 'You can't skip the line when the chicken is this good.' People were saying, 'Wow this is crazy." A corporate place would want to scrub the video," Oganesyan said. "But even the guys who were fighting us DM-ed us and said they were sorry for fighting. So, we knew they weren’t going to care."

He said that trust was one of the biggest things he and the other founders were looking for in a partner.

"Phelps might not get it—he really doesn't get some of the store design, saying one store looked like it was painted by someone on acid—but that's the brand people love, and he does get that," Oganesyan continued. "We're a play-around brand, we'd normally play along with these jokes and it worked perfectly. It is so cool to stay behind the brand and have that trust. They can say, I don’t understand it, but I still trust you."

That's a nice lesson for all the franchise buy-and-grow experts out there. While the founders might look (and act) like kids sometimes, they know their brand and can connect with their customers better than just about anyone.