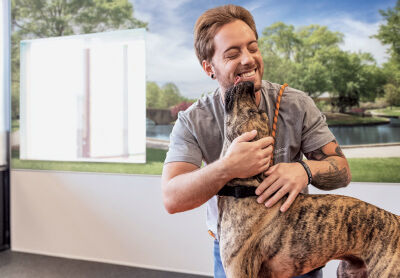 While supporting children with autism is a noble and popular cause, Dogtopia is focusing on adults. Its experience has shown many adults with autism can thrive in a variety of dog-facing roles at its locations.

Attracting and keeping qualified, dedicated employees is a challenge in all industries, with no reprieve in sight. Blending benevolence with brass tacks, Dogtopia has sniffed out relief for its franchisees by educating them about the benefits of hiring adults with autism.

The impacts from the brand’s new program have been more widespread than expected, providing ancillary benefits for existing employees who appreciate the company’s mission, its four-legged customers who are soaking up the extra TLC and a new wave of candidates who tend to face higher rates of unemployment than other groups. It’s all part of the company’s philosophy of empowering dogs to positively change the world—and it’s working.

Realizing there are infinite ways to support the wider community through charitable efforts, Dogtopia polled workers and customers two years ago asking them what they wanted to support. Of course, providing funds to pet shelters was the lowest hanging fruit, but CEO Neil Gill said that was too common, adding, "I think it belittles the dog."

Instead of giving to shelters like so many other pet-focused organizations do, they elected to split efforts among youth literacy programs, service dogs for veterans and providing employment opportunities for adults with autism.

As Gill put it, supporting those on the autism spectrum is particularly elegant because it’s using the natural, positive traits of dogs to "give a hand up" for individuals restricted by a condition that can cause difficulty in social interactions or repetitive thought patterns and behaviors, all challenges in the workplace.

Compared to, say, HVAC work or QSR restaurants where employee attraction is especially difficult, the chance to hang with dogs tends to attract scores of enthusiastic workers. Dogtopia struggles more on the retention side, with a large portion of college-age employees on its payroll who are only in the system for a limited stint.

"People want to work somewhere that has a purpose," Gill said of Dogtopia’s Fetch it Forward Program. "Dogs have always given back to humanity, so let’s create a foundation that allows them to do that. That’s part of the joy they bring, and just by being a dog they bring joy by giving back to us every day."

More than a memo

Educating existing employees about the challenges and opportunities inherent for those with autism required more than a company-wide memo. Jeri Kendle heads up the effort as executive director for the Dogtopia foundation. She was a board member for the Southwest Autism Research & Resource Center and has experience helping employers create a welcoming, safe environment for adults with autism.

In sharing a personal story about friends with a son who is autistic, Kendle said vacationing with them was a revealing experience, "just seeing people giving them the side eye" and questioning their parenting skills. "It’s so difficult having a child with autism, so I knew I wanted to get involved," she said.

Previous experience at SARRC showed the key to making a difference for adults in the autism community depended on training coworkers, which also has the positive externality of helping Dogtopia’s staff better serve a wider range of pet parents.

Kendle noted 85 to 90 percent of adults with autism are unemployed, and that specific jobs such as canine coaches or bathing dogs can be excellent matches for such candidates. "They become part of that labor market that really loves the type of positions that we have available within our Dogtopia locations," she said. "They become the most loyal employees, they’re always on time, they’re generally rule followers, and so all of a sudden we have a solution for an area that has been a concern in the past."

Kendle helped Dogtopia develop a training manual that explains autism in great detail, including three different profiles of adults with autism, like a fictitious Adam who has a knack for numbers, but struggles with time management; Sara, who enjoys the repetitive nature of her work but struggles to talk with customers; and Jon, who is rarely absent and works hard, but finds it difficult to understand when people only verbally communicate things to him.

Kendle’s background helped produce a thoughtful program that benefits the staff, but also attracts the interest of customers. That success, she underscored, is a result of investing the resources to do it right.

"It would have been easy for us to go find something on the internet that worked for another company," she added. "It really didn’t exist in the comprehensiveness of what we’re looking for, so that’s why we went to SARRC and said let’s partner together."