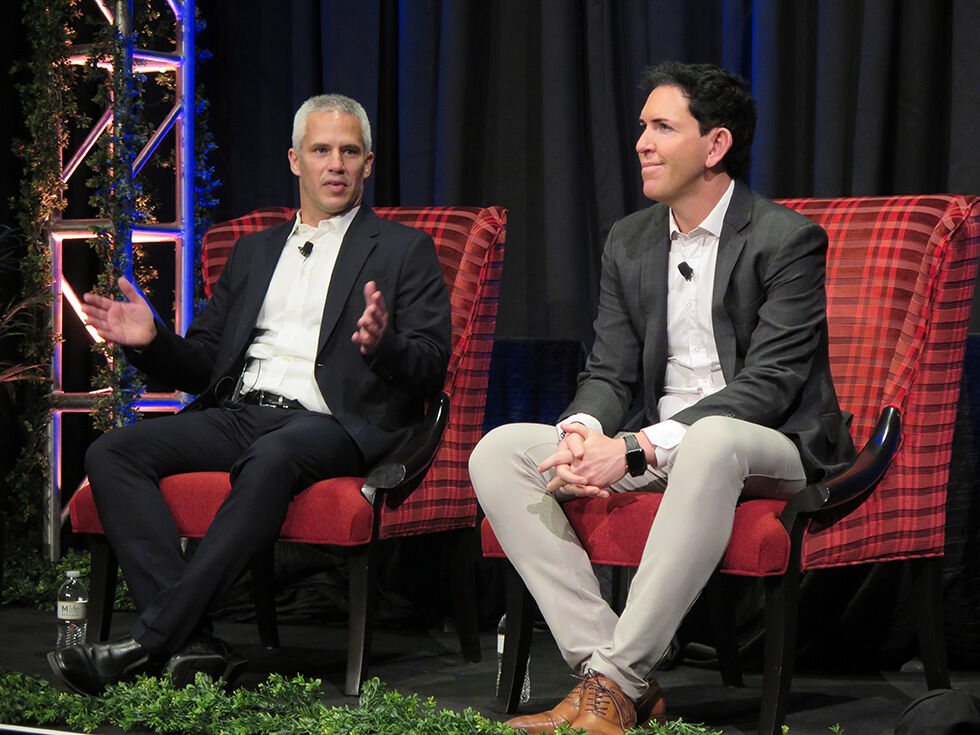 "If I may say, we're here to disrupt the food delivery industry," said Ben Thein, left, of Flytrex, which makes food delivery drones. Andy Rebhun, El Pollo Loco, is one of Flytrex's first customers in the United States.

"Food delivery has reached new heights" intoned the video played with dramatic music at the Food On Demand Conference today. People look skyward, gasping, from atop a horse or in their car, then customers make a mad dash to their backyard as an El Pollo Loco-branded drone lowers their food via a cable, right at their feet.

"Introducing Air Loco, the first national restaurant to deliver by air," the video says, and just like that, the Jetsons become a reality. Flytrex, an Israeli company, produces the drones, partnering first with Wal-Mart and now with U.S. restaurant companies from select but rapidly expanding locations.

"If I may say, we're here to disrupt the food delivery industry," said Ben Thein, chief operating officer of Flytrex. "We operate in North Carolina in three stations. We serve thousands of homes in North Carolina, and we're about to expand beyond that. One is El Pollo Loco, Brinker International," and others.

The drones can deliver food in five minutes, within about a 2- to 5-mile radius, carry up to 6.6 pounds, for 30 percent less cost than delivery via car.  Insurance, too, is one-tenth of the cost for human-via-car delivery. Suburban locations, rather than high-density and high-rise cities, are the target for now, Thein said.

Andy Rebhun, SVP digital and marketing officer for El Pollo Loco, said he got a cold call from Flytrex about eight months ago. "It changed the trajectory for our organization. When you hear drone delivery, you think about something that's super-futuristic. But we had an incredible CEO and an incredible chief legal officer that allowed us to fast-track the opportunity."

El Pollo Loco invited some of its best customers to be the first to try the service, in Orange County, California, and so far about 500 have eagerly done so. What's been the hardest part about training the consumer, Food On Demand moderator Nick Upton asked.

"Just having them not fall out of their chairs. When you see that drone hovering over your house, it's like this is real. It's not the Jetsons," Rebhun said.

"People say, there's no way drone delivery is possible. But we were looking to disrupt the space. This was an extremely viable option for us, and it's exciting to pioneer," he said. "The question people asked was, how did El Pollo Loco do this before Amazon or Google?"

Saying he's not the tech expert, Thein said Flytrex "worked really hard to have this autonomous drone. The CEO of the company, before starting Flytrex, he initiated an autonomous spaceship to the moon. So what's a drone after that?"

Thein noted many limitations and regulations to flying drones. "However, we work closely with the FAA. They've been great partners. We get waivers to fly to thousands of customers, more than any other drone deliverer in the country," Thein said.

"The biggest challenge is, we are the first ones to do that. We have nobody to learn from. It's exciting but it's challenging. We kind of wrote the book of how to do drone delivery in the suburbs of the United States."

As for expected spills, Redhun says the drones "have not spilled a drop. We haven't had any drinks spill which is probably a little bit surprising. It's very smooth."

Added Thein with a laugh: "When we started with Wal-Mart, the most popular item was eggs. People ordered eggs because they wanted to see" if they'd make the trip intact—and they did.

The Food On Demand Conference, presented by Food On Demand, Franchise Times and the Restaurant Finance Monitor, continues through Friday noon, at the Bellagio in Las Vegas. Read more coverage from FODC here.